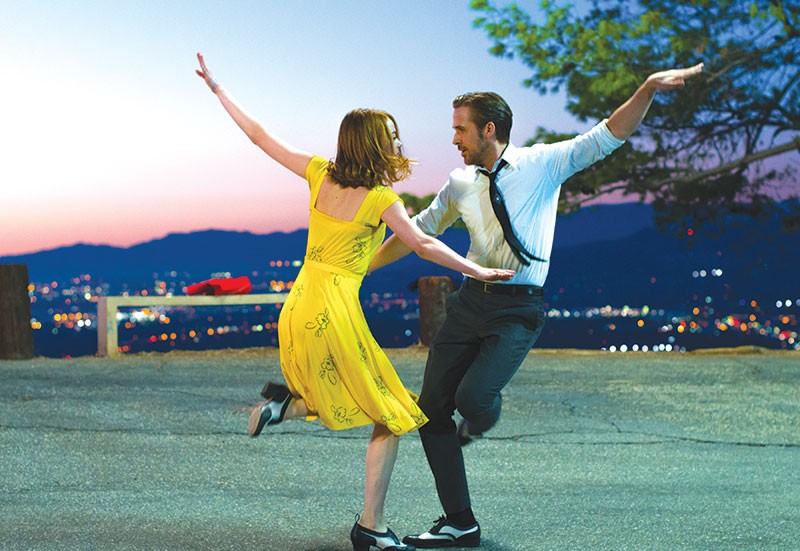 Wide-eyed Emma Stone is the draw in La La Land, an emulation of 1950s widescreen-era musicals. Stone plays Mia, a barista and aspiring actress from Boulder City riding the wheel of auditions in Hollywood. She's starting to lose hope when she meets the similarly frustrated Sebastian (Ryan Gosling).

Sebastian, an aspiring jazz pianist, pays the rent wearing parachute pants in an '80s cover band. (La La Land, which itself has the spirit of a cover band, shouldn't have joked about this profession.) The two go to the movies at South Pasadena's moribund Rialto Theatre to see Rebel Without a Cause. Then they head out to the art deco Griffith Observatory for a CG-augmented twirl in the artificial starlight, right in the very room where the apocalypse scene in Rebel took place. This is a movie that has references in its references.

The cityscapes are astoundingly pretty, and Santa Monica Bay looks as ravishing as a painted scrim. Then comes the classic second-act, boy-loses-girl complication after Sebastian hooks up with a sinister big-name star (John Legend) to prostitute his jazz.

Stone is quite sweet in electric purple and emerald dresses, and powerful in her big spotlight number, "Audition (The Fools Who Dream)," when she sings "Here's to the mess we make." But director Damien Chazelle's insistence on spotlighting her, so we're forced to concentrate on Mia's pain, makes the tune as bulldozing as the showstoppers in Les Misérables.

Jacques Demy's 1964 pastiche The Umbrellas of Cherbourg is a good example of La La Land's mash-up style style done well, as a French reply to Hollywood. That old film's keel about unjust colonial wars and unplanned pregnancy makes it all the more moving, especially when contrasted to the problem of how famous two would-be celebrities should be. Trying to court Mia, Sebastian sings, "What a waste of lovely light." Unfortunately, that's about the size of it.

'La La Land' is playing in wide release in the North Bay.