Style on the Nile

From Ethiopia to Brooklyn to the Bay, Meklit Hadero shines 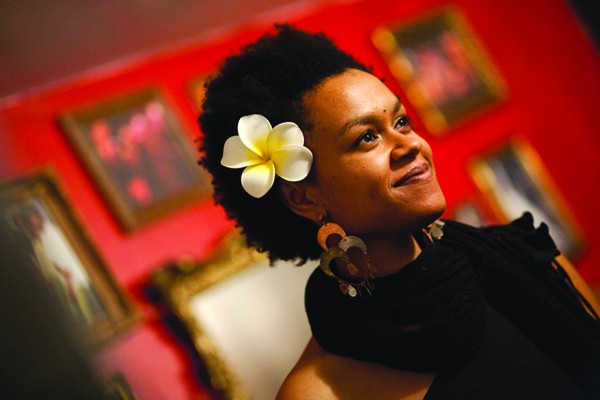 "I always knew that if I had courage to really do what I wanted to do," says Meklit Hadero, "it would be music."

Courage may have been the only thing in question, because Meklit Hadero clearly has talent and passion in spades. A 32-year-old singer, musician, songwriter, guitarist and international activist, Hadero has embraced her Ethiopian ties and integrated them into a hybrid of folk, jazz, hip-hop and soul. On the cusp of a worldwide tour, she makes a local stop May 3 at the Osher Marin Jewish Community Center.

Born in Ethiopia and raised in the United States shortly before her second birthday, Meklit was immersed in the folk music of her birthplace from childhood. During her childhood and adolescence, she and her family moved around the States; she spent parts of her life in Brooklyn, Virginia, Florida and Iowa.

After studying political science at Yale, Hadero decided to explore the West Coast, spending time in Seattle. After a few visits to the Bay Area, Hadero developed a connection with San Francisco and became immersed in the city's flourishing arts scene. She settled in the Mission district and started performing at a small cultural center called the Red Poppy Art House. After first singing a cappella, she learned how to play guitar, then acquired a trumpet player and has also recently added a drummer to her group, all the while willing to take the challenge of exploring the unknown.

"I don't want to play the same way every night," she jokes. "I like surprise and spontaneity, and I like jazz musicians because they are great improvisers. It's flexible and fluid enough that that kind of evolution can develop onstage in front of everyone."

Hadero has recently raised funding to begin the Nile Project, created to connect, through music and arts, all 11 countries in Africa that touch the Nile River. Cofounded by Mina Girgis, the project will come to fruition as Hadero and Girgis float down the Nile in a recycled-plastic boat, recording and picking up musicians along the way.

"There are two ways I like to think about it," she says, planning the trip for May. "[Music] is the act of learning, and then there's the absorption."

At the same time, Hadero is also a senior fellow with TED, the conference for innovators and their ideas. She finds the TED program "mind-blowing" and a "wonderful opportunity to change your perspective about what's possible in this world in a broad way."

With her global influences and positive spirit, Hadero is able to share her musical gift worldwide. "Everything that touches you," she says, "somehow ends up in what you make."