Using the power of pedals and cheese to find—more cheese 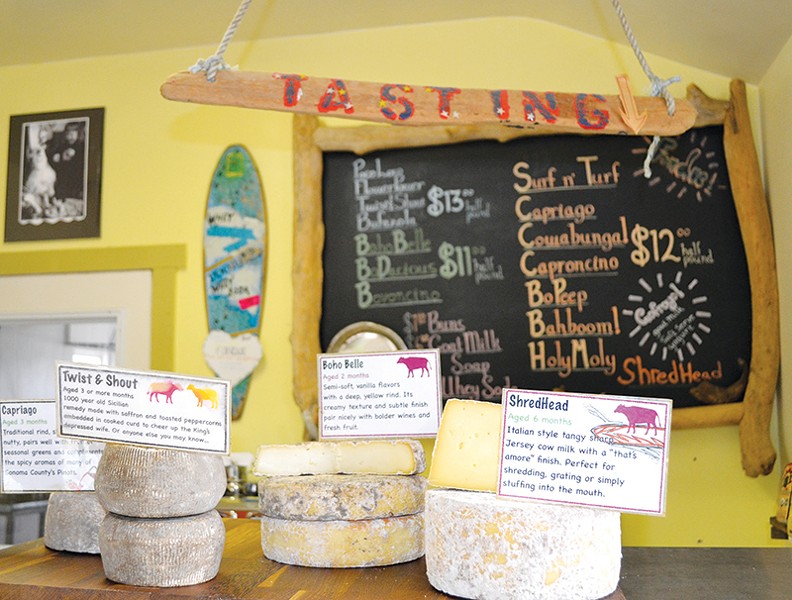 By late January, it was clear that I was not on track to meet my New Year's dietary goals, so I cast about for any possible culprit besides my own self-discipline.

My eyes landed on the plate of cheese I'd enjoyed almost nightly with crackers, maybe a little secchi salami, and maybe a little wine. No, not the cheese! Suppose it was the crackers?

"A small amount of fat is better than a slice of bread," Maureen Cunnie tells me. Cautioning that she is not a nutritionist, but operations manager at Cowgirl Creamery, Cunnie affirms that I'm behind the times if I feel guilty about indulging in their double-cream cheese products because of the bad rap on fat.

"Well, that trend is actually changing very rapidly. There's high demand for high-protein, high-fat foods, and away from overly processed foods." Matter of fact, says Cunnie, a nationwide cream and butter shortage is looming as a result.

Cheese is definitely part of an everyday diet, says Cunnie. "Cheese is very nutritious, it has fat and protein. If you're athletic or into working out or doing cross training, you need both that fat and protein to retain muscle."

I'm getting an idea, since the endless steak-scarfing of low-carbohydrate diet schemes like Atkins, or various "paleo" concepts, just feels a bit tedious. Why not, instead of gnawing on ribs in some spurious version of the Upper Paleolithic, move the clock forward a few thousand years to the pastoral era?

Pastoralism is more than a pretty picture. For thousands of years pastoral societies in Africa, Asia and Europe have herded goats, sheep, yaks—you name it, it's got milk, they herd it—and made various fermented products. Borrowing a page from controversial "keto" diets, where the idea is to focus the body's attention on fat, I'll go further and bastardize food philosopher Michael Pollan's "eat food" precept: Eat cheese. Lots of it. Go nuts.

A rigorous survey of online resources—or the first page of Google results, where any modern chump gets his healthcare information—turned up just one mention of pastoralism writ as fad diet, and trademarked, no less: "The Pastoral Life—Home of The Pastoral Diet™ & Movement Plan." (Consult the digital influencer of your choice, or better yet, a doctor, before beginning any new diet.)

Unfortunately, the author let the site's hosting expire shortly thereafter, but from what I remember it goes like this: I can eat plenty of cheese if I mimic the active lifestyle of a wiry herdsman leading his flock around the mountains. And oh yeah, a little goatskin flask of wine is absolutely OK.

Soon, I'm pushing my herd uphill to greener pastures on Point Reyes-Petaluma Road. Though it'd be a kick to run a bunch of bleating sheep down D Street, my herd is actually two wheels on a steel-frame road bike. But I'm climbing hills in cow country, all right, and the cars that pass me do exhibit curious herding behavior, following each other almost nose to tail on this well-worn trail.

My first stop is Marin French Cheese, founded in 1865 when, apropos, a sudden demand for a high-protein egg alternative was filled with the Petite Breakfast Cheese. The hot tip here is to get the discounted off-weighted samples. I catch a round of Schloss that's still sliceable and move on.

I learn from my friendly cheesemonger at Cowgirl Creamery that their aromatic Red Hawk is only made in Point Reyes Station because it wouldn't ripen the same in another environment. I opt for Wagon Wheel, which is like a fontina but more rich and buttery.

A detour to Nicasio Valley Cheese nets a rare hunk of aged San Geronimo—fine-textured, less buttery but almost smoky, with a meaty umami quality. Cheesemaking at this creamery, which has Swiss-Italian heritage, can be viewed through a window while one nibbles on samples.

Back in town, I find something besides cheddar and ice cream at Petaluma Creamery—a dry Jack goat cheese that's flaky and tangy.

Midway up a treacherous path in the hills of West County—Occidental Road—the tiny shop at Bohemian Creamery is packed with artisan treats like Bo Peep. Now this looks like something an old shepherd pulled out of his rucksack, but it's creamy under the rustic-looking rind, like Toma. In town, Sebastopol's Wm. Cofield Cheesemakers specializes in English-style cheddar and a Stilton-style cheese called Bodega Blue that's got a hint of cheddar, in contrast to Point Reyes Bay Blue.

Finally, a long lonely trek down Llano Road is rewarded with wholesale-priced St. George at Joe Matos Cheese Factory. The farmstead and its population of phlegmatic farm cats is charmingly unimproved, but the dependable St. George cheese has lately been joined by two extra-aged versions.

OK, by month's end I've gained five pounds. But I don't blame the cheese, the beautiful cheese, and let us not speak of the wine. I blame the weather—seems the shepherd took shelter for much of this rainy February.

See if you can do better at next weekend's Artisan Cheese Festival, where the curds are mounded high at Sunday's walk-around tasting. Go ahead, climb every mountain. Need more exercise, do another lap.