Five days before the grand opening of the building that is to be the pinnacle of his career, Sonoma State University president Ruben Armiñana leans back in his office chair, breathes a reflective sigh and tells a story made for Hollywood.

"I made a promise to a 14-year-old boy," Armiñana says, "on Nov. 6, 1961. His name was Ruben. And he was leaving his country that day, he was leaving his parents. At that moment, he didn't know if he would ever see his parents or his brother again. He had a lot of wealth with him—he had a dime and he had a change of underwear. But he had this ability to be determined that nobody, be it government or individuals, would ever intimidate him. And he would never retreat in the face of intimidation. And I have kept that promise for 50 years."

It's difficult to overstate the magnitude and impact of the Green Music Center, opening this weekend at Sonoma State University. No project has more greatly tested Armiñana's promise to himself, over 50 years ago, as he was shipped on a boat from Cuba to the United States. The $145 million performing arts and music education center has taken almost 20 years to arrive at its current state, and is still not entirely finished.

The main hall, however, which opens this weekend, has already garnered worldwide attention for its stunning acoustics and dazzling first-season lineup of stars like Yo-Yo Ma, Lang Lang, Michael Tilson Thomas, Alison Krauss and Wynton Marsalis. There are few concert halls comparable, let alone ones on a college campus.

But to say it was a bumpy road to this weekend's opening is like saying this one guy named Mozart wrote a few good tunes. Just like the works of the famous 18th-century composer, it will only be with the passing of time that the legacy of the Green Music Center—and the legacy of Ruben Armiñana—is truly realized.

Is this the president's Spruce Goose? His Hearst Castle? On the cusp of opening night, it's looking a lot more like Carnegie Hall.

At age nine, living in Santa Clara, Cuba, the young Armiñana found himself enrolled in a violin class; his mother believed all educated people should learn to play an instrument. "Halfway through the class," he tells, "the teacher called my father and said, 'Why don't you come and pick up your son? I know he has talent. This is not it. Why destroy your pocketbook, and my ears?' And that was the end of my musical career."

Somewhere, the camera is cutting to an image of that violin, engulfed in flames, with the word "Rosebud" on it. If Armiñana is making up for being kicked out of the class by building a grand hall for classical music, then, based on the scope of the Green Music Center, he must have really felt bad. 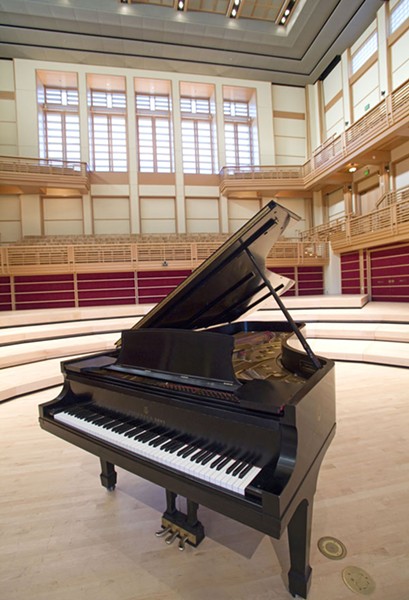 The main hall alone has rightly been declared an acoustic marvel. Featuring six different kinds of wood, the room can be "tuned" for resonance using panels in the ceiling and on the walls. The stage can be pulled out in different tiers for the orchestra or pushed back to maximize performing floor space. Even the chairs, with a total price tag of $1.2 million, have unique, individual bevels corresponding with the slope of the floor, designed for maximum acoustic transparency.

Pushing the space into the upper echelon of concert halls is the HVAC system, oversized for its needs, silently keeping the room at a constant temperature for both the comfort of the audience and the tuning of instruments. The back of the hall opens to a terraced lawn, allowing for over 3,000 additional seats. And though they're technically unnecessary, because the design of the hall shoots sound out the opening at a perfectly audible volume, speakers amplify the audio outside, and 18 downfiring subwoofers shoot sound into the ground for a natural low-end feel.