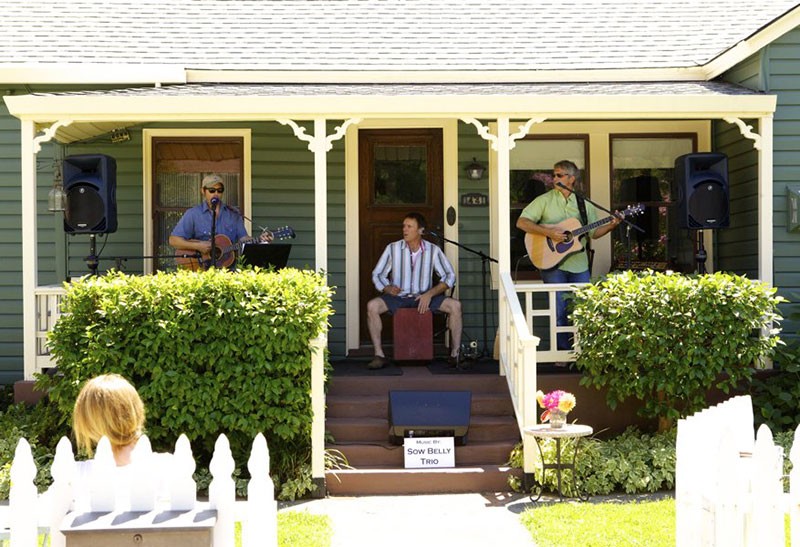 It began when a friendly East Coast vs. West Coast debate turned to the front porch

A group of music-loving friends were comparing regional architecture, when East Coast native Louisa Hufstader pointed out the lack of porches on the West Coast. She shared her experience with Porchfest in Ithaca, N.Y., a live-music phenomenon that was something of a local secret.

That's when the friends decided to start Napa Porchfest. Now in its fourth year, the ever-expanding event expects thousands of visitors throughout the afternoon of Sunday, July 27.

"We have so much amazing talent in Napa Valley," says cofounder Rachael Clark. "This is a way to celebrate local architecture and local music."

This year's free event boasts no less than a hundred musical acts appearing on 50 stages in the neighborhoods surrounding downtown Napa. This year's lineup is more eclectic than ever, and in addition to the staple of well-loved local jam bands and acoustic acts on hand will be funk, rock and pop bands from around the North Bay.

Maps and schedules are available online at napaporchfest.org, but here are some ideas to get you started:

Napa singer-songwriter Kristen Van Dyke performs her folk pop in front of City Winery at 1030 Main St. with surf rock band the Deadlies. Hometown indie rockers the Radio Effect will be playing their melodic, driving and emotive music in front of the Napa Landmarks building at 1219 First St.

Hip-hop bassist and lyricist Elwin G. Williams III, aka Darealworldsound, lays down a funky, dynamic groove on the Santos porch on Juarez Street. There is also the swamp blues of Graveyard Boots, the post-folk of Trebuchet, the old-time Appalachian sounds of the Pickle Creek String Band, even the ethereal electro-pop of Napa's own Magnanimous, all on deck for an afternoon of endless options.

The large, picturesque houses that host the music are within walking distance, and bikes are more than welcomed. The city of Napa is co-sponsoring the event this year, assisting in the logistics of street closures and ensuring a safe environment to stroll from house to house. Food trucks, a popular addition last year, will again be on hand at the library, as well as an open stage for impromptu performances.

This year the Porchfest folks are interested in spreading the love. Clark and the other founders envision a scenario where other North Bay towns adopt their own porchfest events, and they're offering help to get them organized. Until then, Napa remains an ideal setting for the communal spirit of this year's popular event.