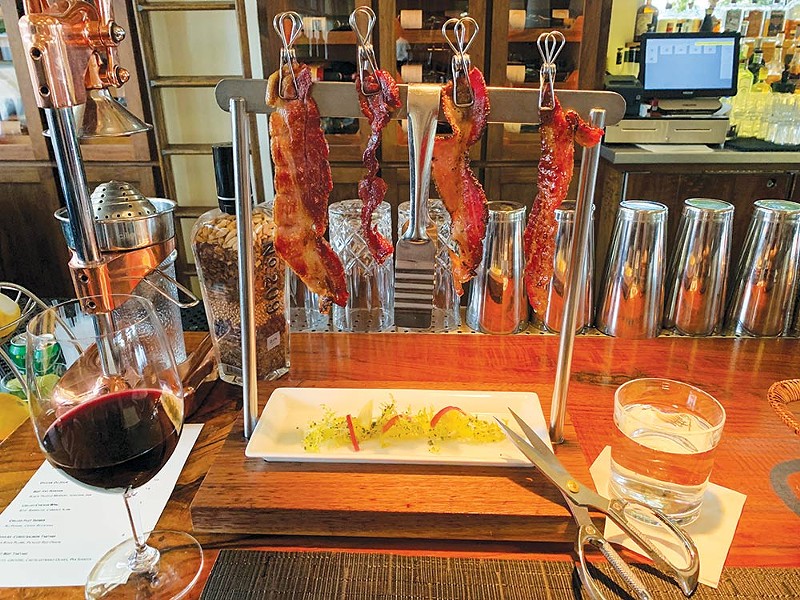 Ideally, this order is best served as an appetizer or shared during happy hour as a bar snack—at least in my opinion.

But, yes, you can whet your palate with four strips of bacon—savory, lean, peppery and candied—served dangling from metal clips attached to a hand-crafted, oak-and-metal structure akin to a Newton's-cradle desk-accessory. The late PRESS owner, Leslie Rudd, had this construction fashioned from a similar, more rudimentary clothesline-and-pins device he spotted in a country-western bar in Colorado.

Five years earlier, before Rudd hired a master carpenter (the same carpenter credited for the built-in cabinets behind the bar) to build the bacon-dangling structure, they served the tastings flat on a serving plate. First things first, though. I wanted to be sure I paired the experience with the perfect glass of wine. This evening's sommelier, Taylor, suggested the wine should offer structure, and with that, he recommended a 2016 "Vicarious" Modus Operandi blend of cabernet sauvignon, merlot, petit verdot and syrah.

The wine list at PRESS caters to this upscale restaurant's world-class steak reputation, but also serves its purpose with bacon, transforming the strips into an elegant, before-dinner option. Later, the maître d whispered, "Try it with Champagne—it cuts through the fattiness." OK, so I'll be back for seconds.

For now, the waiter served my bacon strips with a sprinkling of frisée on the floor of the contraption, if only to remind me to eat healthy greens the following day. A tong and a pair of silver kitchen shears were provided as aids to snip tastes to share, but I was hard-pressed not to use my fingers. I had to keep in mind that I was among elegant diners, albeit during a Thursday evening happy hour at the bar, with full seats.

From left to right, I began my tasting with a slab from Neuske's of Wisconsin. This hearty, thick cut of apple-smoked, meaty goodness simply had to be cut with a knife and eaten with a fork. If I hadn't known the fat came from the bacon, I would have thought it was a well-prepared portion of pork belly.

Next, a lean, jerky-like slice of boar meat from Durham Ranch in Wyoming proved to be chewy, with a gamey essence. I was more than ready to move on to the third tasting of a pepper-cured, crispy strip from Hills Farm in Pendleton, Oregon. If one could award a Michelin star to a cut and seasoning of bacon, this strip would earn a few stars. It was that delicious, with a peppery finish that paired perfectly with my second glass of Modus Operandi.

Finally, dessert bacon. Yes, it's a thing. And this cut hails from Hobbs' Applewood Smoked Meats, just outside of Richmond, CA. As a breakfast side, this strip of applewood smoked bacon wouldn't cut the mustard, mainly because it wasn't savory. It was candied with Dijon mustard and raw brown sugar and baked in the oven for a brûlée effect. I could barely taste the Dijon, but seriously, if bacon could be a dessert, this is it!

With my tasting complete, the maître d asked which bacon strip was my favorite, to which I admitted I was at a loss. Each one offered a unique, incomparable taste profile, but, if I had to pick one, it would be the first strip in all its thick, pure bacon-y goodness. No, wait. It would be the peppery, crisp strip. Well, I couldn't decide on an absolute favorite, but I knew one fact for sure—the one member of my family who would love this bacon tasting more than I did would be my dog.