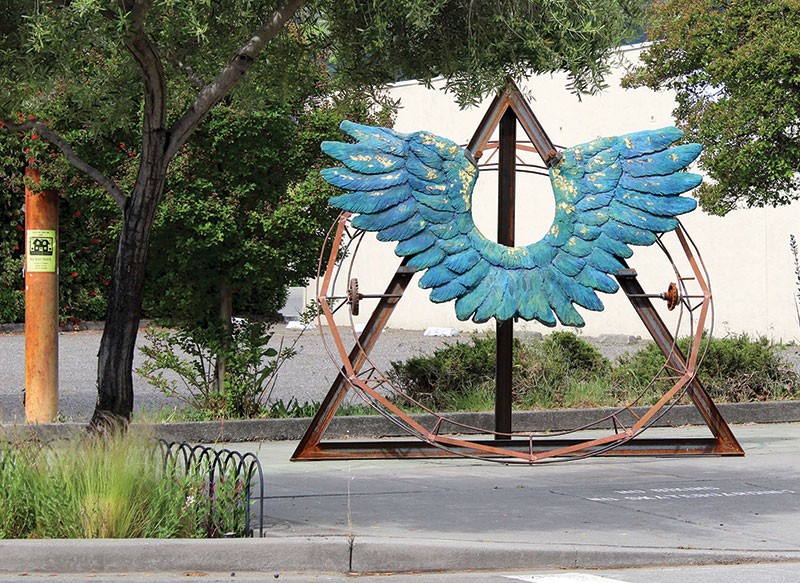 For a decade and a half, the small northern Sonoma County town of Cloverdale has been a hidden gem of art, thanks to the Cloverdale Sculpture Trail.

This summer, the sculpture trail invites locals and tourists alike to stop in downtown Cloverdale and view nearly 20 large art installations that dot the town's main boulevard. The trail also celebrates its 15th anniversary with a special artist reception that is open to the public on June 2 at the Cloverdale Performing Arts Center.

At the head of the sculpture trail is longtime Cloverdale resident Joyce Mann, who first conceived of the project in 2003 during a major construction project to redevelop Cloverdale Boulevard.

"The whole idea was to bring people downtown during construction," says Mann, who coordinates the now-annual exhibit with a group of mostly volunteers working under the umbrella of the Cloverdale Historical Society.

After the first 10 years of exhibits, funding from the city dried up for the trail. "I did not want to see my baby disappear," says Mann, who joined forces five years ago with representatives from the neighboring town of Geyserville to create the 101 Sculpture Trail, offering public art in both locales.

Last year, Mann says the philosophy of how the trail should be handled differed between Cloverdale and Geyserville. "Our two communities are so diverse; it was not possible to satisfy both with what we were doing," Mann says.

Now Mann's baby is back to being called the Cloverdale Sculpture Trail, and the 2018–19 lineup of sculptures on display is a compelling collection of engaging art.

"What we like to do is bring in a lot of new sculptures for our community and visitors," Mann says. This year's batch of 12 new sculptures, showing alongside seven permanent works, includes pieces that are whimsical, weighty and otherworldly, such as the tall, looming sculpture Alien by Laytonville artist David McChesney. The piece is an old double-trunked tree that was dug up and positioned upside-down, giving it the illusion of a being with tall legs and an odd rootlike head and appendages.

"We want to have something on display for everybody," says Mann, who is currently finishing work on a self-guided audio tour for this year's exhibit that will soon be available on the Otocast mobile app.