Taking It to the Streets

It's been a busy day for 58-year-old Charlene Love. She spent most of it in classes at Santa Rosa Junior College, where she studies horticulture. Later, she went to a meeting of housing advocates, and she ended the day scanning the internet looking for a job and a place to live. Love recently found housing, but it's not permanent.

"My goal is to not get caught up in the system of homelessness," says Love, who is weary of hopping from one temporary shelter bed to another. She's not alone.

Love's story is all too familiar in the North Bay, even as the city of Santa Rosa is ranked in the top 10 in California for homeless services. It is, surprisingly, third in the state when it comes to the availability of affordable housing. And yet Sonoma County saw a 32 percent spike in homelessness between 2009 and 2013, according to data from the Task Force for the Homeless.

That rate is higher than the state and national averages, and data from the Sonoma County Department of Health indicates that an average of 30 homeless people die on the streets of Sonoma County every year. The good news is that the county has seen the advent of a vigorous homeless-advocacy movement. Love is a part of that movement, and serves on the county's Task Force for the Homeless and is a member of Homeless Action, a group of activists, church members and, critically, the homeless themselves.

The push in activism comes as the county studies efforts to address homelessness in more innovative ways. There are models around the country worth considering. Utah, for example, has reduced its homeless population by 77 percent utilizing the "housing first" approach. It's a pretty simple idea: Give people a place to live, because it's cheaper than jail or the emergency room.

Some cities have developed sanctioned encampments run by homeless people. The camps bring people into community, instead of isolating them from it. Santa Rosa is looking into it, but not very closely. The key question for Sonoma County leaders is to find which solutions are most viable for the region. There are plenty of ideas: sanctioned encampments, converting the old Sutter Hospital building into single-room occupancies, rent protections, rescinding all city ordinances that prohibit sleeping in cars and providing safe parking for those with cars, to name a few.

One solution that seems particularly workable for Sonoma County is providing tiny homes for the homeless. (There are three tiny-house communities run by and for homeless people in at least three states; they offer a mix of transitional and permanent housing.) These 200- to 500-square-foot houses are affordable ($15,000–$30,000) and energy efficient, and they align well with Sonoma County's long-term plan for affordable housing, Program 41, which proposes using "non-traditional structures for housing."

The county already has a vibrant tiny-house scene, and is considered a hub of production thanks to Tumbleweed Tiny Houses and the educational advocacy of Jay Shafer, Tiny Houses author and founder of Four Lights Houses. Shafer leads workshops on tiny-house design across the country and hopes to create a development in Sebastopol.

He is reticent on the point that tiny houses are a solution to homelessness, but he's emphatic about the general social boon the tiny-house movement can offer, especially on affordability. And Shafer is optimistic that changes in housing code will remove barriers to tiny-house development in the county. Small houses are often put on wheels making them technically recreational vehicles. Grouped together, they could be zoned as RV parks to get around regulations about permanent structures.

Housing advocate Jack Tibbets has a proposal with Sonoma County to create an "Eco-Community," a five-unit mini neighborhood designed with a central garden space. Residents would be required to put 65 percent of their rent into a savings account. The project's estimated cost is $287,000, far cheaper than the cost of traditional affordable housing. Tibbets has submitted a proposal to the county Board of Supervisors that seeks to identify properties for a pilot project. The board is considering the proposal but has not acted on it.

Tibbets believes small houses will give residents the dignity that shelters strip away. "I have found many homeless people to be incredibly self-sufficient and independent," he says, "and I think we should be creating spaces for their self-determination to thrive."

Jay Beckwith, CEO of Sonoma Workforce Homes, has a plan to create a community for low-wage workers in Healdsburg. Sounds good on paper: tiny-house ownership at zero percent interest for workers who make at least $15 an hour, which he'd like to see become the minimum wage. 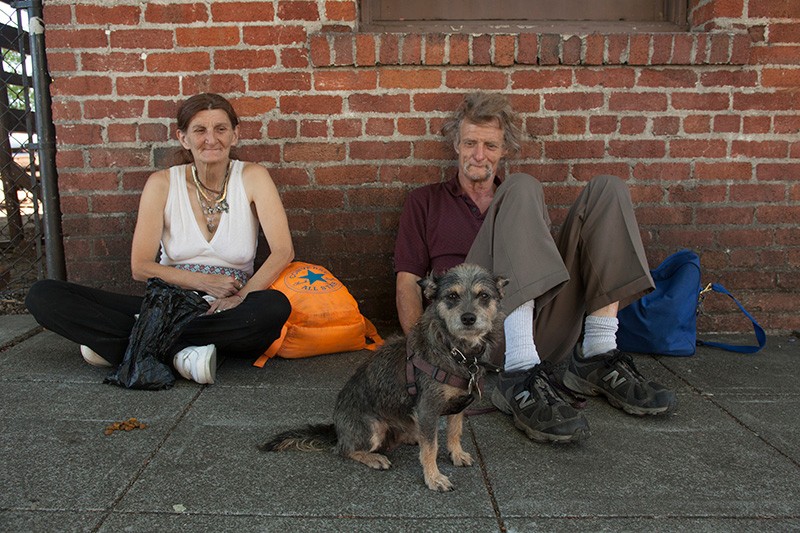 Beckwith believes that business owners have a responsibility to their communities. "We believe access to a home, food, water and education are a right," he says. "Since such a change is unlikely [to come] anytime soon, we are doing what we feel is our moral obligation."

The problem with the tiny-house push is that, as one activist put it, it relegates poor people to "glorified shacks" while blowing off the issue of economic injustice—which creates the problem of homelessness in the first place.