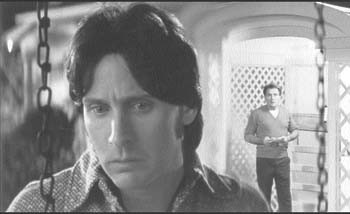 Coming Home: Emilio Estevez and Martin Sheen star in 'The War at Home,' the third film about the war experience made by this family.

David Templeton takes interesting people to interesting movies in an ongoing quest for the ultimate post-film conversation. This time out, though, he simply listens to actor and director Emilio Estevez talk about his latest film, The War at Home.

I'VE GROWN UP with the shadow of Vietnam, to some degree, always hanging over me, over my country," says actor/director Emilio Estevez, taking the stage at this fall's Mill Valley Film Festival to introduce his stunning new directorial effort, The War at Home. "With all the films that have been done about that war, few have really dealt with what the war did to the people who stayed home, and the people who came home wounded, physically and otherwise, from the war." After a few additional words, Estevez takes his seat, and the film rolls.

Produced by Disney's Touchstone Films--in exchange for which Estevez agreed to appear in Mighty Ducks 3--the $4.2 million film is based on a play by James Duff. In a small Texas town in 1972, a couple (Estevez's father Martin Sheen and actress Kathy Bates, with Kimberly Williams as their daughter) struggles with their deeply troubled son, Jeremy (Estevez), who's just returned from a tour of duty in Vietnam and appears to be falling apart. The movie has tested well at various film festival audiences, including the one in Mill Valley, but with minimal promotional effort from the studio, it's currently floundering at the box office.

"It's going to take a real grassroots effort to sell this movie, I know that," Estevez concedes. "If any movie ever relied on word of mouth, this is it." It is the day after the festival screening, and Estevez is upbeat, though guardedly so, at the rousing response of the audience. Asked to elaborate on last night's opening remarks, he admits that many have asked how someone who was so young during the war (he's now 34) has so much passion for the subject of Vietnam.

"The Vietnam War was a televised war, obviously," he replies. "It was an event war, so it wasn't lost on me, partly because of my father being as politically active as he is. I actually became a news junkie as a result of my father's interest. I remember watching television one day. I was 6, and we were watching the lottery draw for the draft. I remember seeing my birth date--May 12th--come up. It was another year, obviously, but we were sitting there watching this. My mother was sitting next to me, and she said, 'If this war continues, we're going to Canada.'

"That's kind of a lot to heap on a 6-year-old kid," he goes on. "But my parents were very open about their feelings. So I had an awareness of what was happening at a very young age."

Not surprisingly, since Estevez is the son of the man who played Apocalypse Now's brooding assassin, the public's reaction to that film made a profound impact as well.

"After my father did Apocalypse, Vietnam vets were always trying to reach him," Estevez says. "They just wanted to talk to him. They believed he was that character. My father ended up employing one vet. He lived in our backyard, in a trailer, for four or five years. I was 14 at the time, and we'd talk a lot. He was kind of out there. This guy was teaching me escape and evasion, he was teaching me all kinds of things.

"I didn't realize it at the time, but he was obviously going through post-traumatic stress syndrome, and I was like a sponge, just soaking it all up."

To prepare for his part in The War at Home, Estevez visited a Vietnam veterans' outreach program in Waco, Texas, where he staged readings of the script for several groups of vets recovering from PTSS. Their reactions helped shape his performance.

"I hired a vet to be on the set as a consultant," he explains. "This is a guy who was all shot up. He saw a lot of combat over there. He pulled me aside one day and said, 'It's like the ghosts of the vets are moving through you. This is becoming very authentic, it's giving me chills, and I really have to leave now.' So he left, but I knew I had his stamp of approval."

There is a scene in the film where Jeremy is noticed by a little girl at a bus stop. He's obviously been crying. When she asks if he's all right, he responds, simply, "I will be."

"'I will be,'" Estevez repeats when reminded of that moment. "Yeah. Vets who've seen the finished film have come up to me and said, 'Thank you for that line. It gives us hope.' I think the whole country is dealing with post-traumatic stress syndrome as a result of that war. It's still part of our national consciousness. And until we can openly grieve about the war, we won't be able to shake it."