In Sausalito's shadow, a community adrift

Late last January, Phil McGovern's cell phone rang around 4am, that most ominous of hours. It was the U.S. Coast Guard on the other end, calling to inform McGovern that the anchored boat he called home was spouting flames, its hull inching lower into the dark depths of Richardson's Bay with each passing minute.

The fire, fueled by a deck full of hoarded clutter, quickly consumed the vessel, and with it, McGovern's beloved onboard library. As an unemployed carpenter, McGovern had spent the past year rebuilding the boat, whose charred remains would soon come to rest on the shallow bay's muddy floor. The fire's cause remains a mystery.

Tales of near-disaster and worse abound in a long-established but controversial floating community in the usually calm waters of southern Marin's Richardson Bay. Some 50 people live year-round aboard a motley collection of vessels in varying states of disrepair within view of the affluent hillside homes and mansions of Sausalito and Tiburon, but police say up to 130 call the bay home in warmer months.

While "anchor-outs," as they're locally known, have lived on the small bay for as long as anyone can remember, there's a fresh focus on the group now as Sausalito's newest police chief has simultaneously stepped up marine patrols and health initiatives. While police say they're just doing their best to ensure public safety along the waterfront, ask most anchor-outs and they'll attribute the heightened scrutiny to the run-up to the highly anticipated 2013 America's Cup Finals, which will take place in the main waters of San Francisco Bay and likely bring a flurry of visitors and media attention to nearby bayside communities such as Sausalito.

At a glance, the Richardson Bay anchorage presents a postcard maritime scene. Indeed, the vistas are so prized that a Belvedere couple recently made national headlines after buying a $4.2 million house next door so they could tear it down to better their view. But for those who call the bay's waters home, it's often a life less than idyllic, one full of daily challenges and perils. Beyond harrowing winter storms and the practical difficulties of daily life afloat, chronic unemployment, substance abuse, mental health problems and poverty afflict many of the bay's residents.

While some vessels are kept seaworthy, others are little more than floating barges, precariously piled with debris. Fires and sunken vessels are common, and during periods of high winds and stormy seas, boats routinely drag their anchors, colliding with neighboring vessels or crashing into the Tiburon shoreline. At the U.S. Army Corps work yard along the Sausalito waterfront, a steady influx of maimed and sunken vessels add to a mountainous pile of flotsam plucked from the bay. 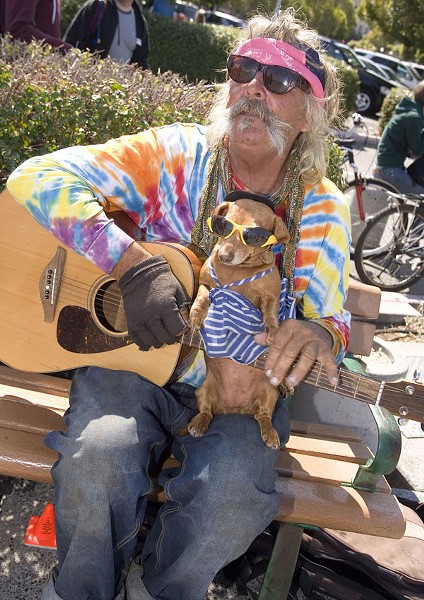 And yet the bay's protected waters have long served as a refuge for people who might otherwise be homeless. "This anchorage is a safety valve for people who've lost their homes, who're divorced, foreclosure, whatever," says Peter Romanowsky, 62, who moved onto an anchored vessel after a difficult divorce nearly three decades ago.

Romanowsky is widely known for his annual bids for local political office (he self-identifies as Republican) and for playing the guitar before tourists arriving off the ferry, his sunglasses-wearing dog under one arm. But these days he says he's looking for a home off the water, citing a growing number of friends lost in recent years to drowning and other causes. "People come out there to get a fresh start, or to die," he says. "A lot of people are just dead."

Life on the water with Sausalito's boat-dwelling community