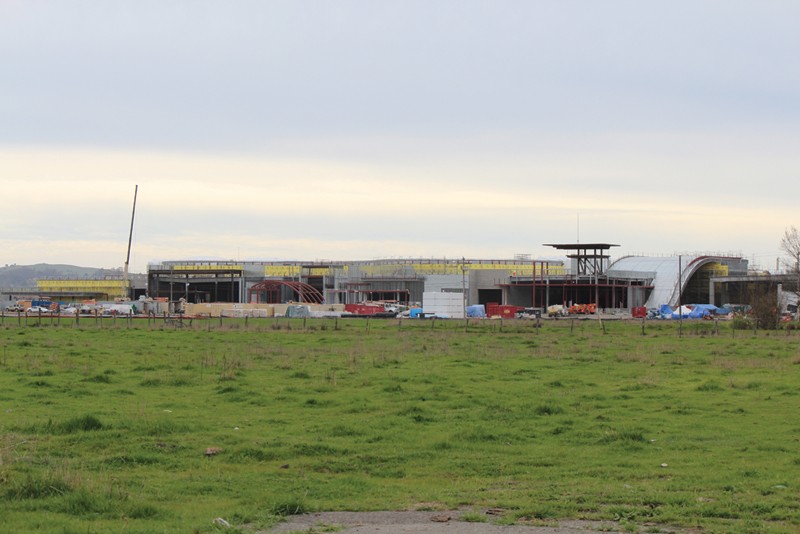 Striking it rich at a casino might seem like a long shot to many, but it's a reality for landowners adjacent to the gambling palace under construction on Wilfred Avenue just west of Rohnert Park, whose ante consists of signing a name on a title deed.

According to public records, land surrounding the new casino being built by the Federated Indians of Graton Rancheria and financial partner Station Casinos of Las Vegas is now selling for over $1 million per acre—nearly 10 times the going rate of just four years ago—an increase owing to the anticipated traffic and commercial development the casino could bring in the historically rural area.

The 3,000-slot casino and its 5,000-car parking garage broke ground last June. The tribe hopes to be open for business by the end of this year, and after buying almost every available plot of land with a view of the casino, Station Casinos hopes to begin surrounding commercial development soon thereafter. In the meantime, local landowners are heading to the gates and cashing in their chips.

The city of Rohnert Park is currently forming an area development plan for a shopping center and other retail spaces near the casino. Guess who spent the past six years buying land around the site? Ding! Ding! Ding! That's right, Station Casinos. And sale prices are still escalating. One purchase showed that $1.13 million was paid for one acre of land on Wilfred Avenue in 2009. In total, the company has spent over $17 million for 20 acres in the adjacent area, an average of about $850,000 per acre.

Prices weren't always so high. In 2005, the tribe paid $100 million for the 254-acre swath of sovereign land, a relative bargain at $393,700 per acre. Only 66 of those acres are being used for the casino—the other 188 will act as a "community separator" to the southwest of the site. (Now-bankrupt financier and developer Clem Carinalli was the principal moneymaker in that deal, along with James Ratto and Dennis Hunter.)

Plots are still available, but landowners know they're sitting on a jackpot. One five-acre parcel a few hundred feet from Wilfred Avenue, on Langner Avenue, is being offered by Century 21 for $5 million. In 2009, the property sold for as little as $255,000.

GOVERNMENT GETS ITS CUT

Area landowners aren't the only ones profiting tangentially from the casino. Under terms of a revenue-sharing agreement, Sonoma County will receive at least $9 million annually from the tribe to offset the project's impacts. That figure could balloon to $38 million if the casino is profitable enough.

The city of Rohnert Park has already begun to receive $200 million from the Graton Rancheria tribe over a 20-year period, and the cash-strapped Cotati Rohnert Park Unified School District will receive $1 million annually, according to the agreement. A five-story Oxford Suites hotel has already been approved for construction two blocks from the casino, which would pitch in another 12 percent hotel tax to the city.

The tribe has also agreed to donate $30 million annually to the county for open space projects and up to $8 million to the county's Indian Health Project and casinoless tribes. Surrounding cities of Santa Rosa, Petaluma, Sebastopol and Cotati will share roughly $417,000 annually for law enforcement duties (Santa Rosa gets $286,923, Petaluma $102,591, Cotati $12,808 and Sebastopol $14,596) and fire districts in the county will split $1 million.

Landowners choosing to keep their land may benefit from the casino as well. Last month, the city approved the use of eminent domain to buy land needed to widen Wilfred Avenue to four lanes in order to accommodate the expected traffic for the casino. After some prodding by the city, the tribe is now picking up the $10 million tab for the project. According to recent reports, all but a few of the 22 needed parcels have been acquired. The few holdouts are asking for reappraisal of the land, which would raise its value.