'The Fellowship of the Ring' 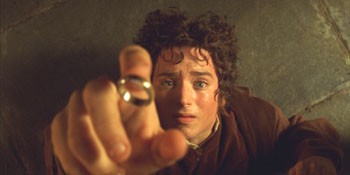 Filmmakers and musicians had been raiding The Lord of the Rings novels for almost 50 years. Just about everybody's gotten into the act, from George Lucas to Led Zeppelin to J. K. Rowling. So it was hard to expect anything fresh in the long-awaited film version.

All the more reason that the high quality of The Fellowship of the Ring turns out to be the season's greatest surprise.

The antihero of British author J. R. R. Tolkien's famous fantasy trilogy, published in the 1950s, is a ring. Director Peter Jackson even gives the cursed piece of jewelry a point-of-view shot. In the time before recorded history, this ring was the doomsday weapon of Sauron, the Dark Lord of Mordor.

After eons, the lost ring is discovered in the least ambitious hamlet in Middle Earth, part of the property of hobbit Bilbo Baggins (Ian Holm). Gandalf the wizard (Ian McKellen) sends the powerful item away in the custody of another hobbit, a young dreamer named Frodo (Elijah Wood).

A band of men and not-men (elves, dwarves, hobbits, etc.), united by a past of mutual mistrust, meet to escort the item back to the fires of Mount Doom, where it was forged eons ago.

Jackson and writers Frances Walsh and Philippa Boyens have made the story pitch-dark, emphasizing the conflict between Gandalf and the traitorous wizard Saruman (Christopher Lee). The director's visuals stress the book's quality as an ecology fable. He makes Lord of the Rings pagan. This tactic may be the smartest decision Jackson has ever made as a filmmaker.

Middle Earth is being ripped apart and polluted for literal war machines; these open pits and open hearths are straight out of Bosch. The scenes here of the oaks uprooted by orcs is all the more painful for the thought of the dying oaks hereabouts.

The yet unravished New Zealand landscapes are both harsh and virginal, contrasting with the peasant backwater, the Shire, where the Hobbits live their little Renaissance Faire lives.

We also head through the muddy town of Bree, alive with ruffians and rats. Yet the elf encampment at Lothlorien is ethereal; it's as if some architect had built a palace in a grove of sequoias without injuring or upstaging the trees. Jackson captures the unearthliness of these architects, these elves.

The Fellowship of the Ring is graced with subtle acting by Liv Tyler, Hugo Weaving, and Cate Blanchett as the nobles Arwen, Elrond, and Galadriel. In Jackson's film, the power of good is remote and slightly disdainful; in this war between darkness and light, elves are the officers. They have their own agenda, and they're not to be trifled with. As Nietzsche wrote, there's a thin line between the superhuman and the inhuman.

I agreed with the dwarves: I didn't trust those elves either.

Dull patches abound in the book The Fellowship of the Ring: the tedious travelogue, the endless verse, the unbearable hippy-dippery of the Tom Bombadil episode (all three deleted from Jackson's movie).

Still, Tolkien was probably at his worst in depicting the elf queen Galadriel, a Virgin Mary figure in the book. There's no Catholic as fulsome as an English Catholic. In her small but pungent role, Cate Blanchett snaps that stuff shut. In some instances, her Galadriel is a bit of a bitch--cold and powerful--and her elfin superiority leaves her open for a nasty shock from the power of the ring.

The rest of the acting is just as canny. Elijah Woods' sweet-faced Frodo and Sean Astin's Sam are like rambunctious, cuddly children, but they are never on camera long enough to become pests. Viggo Mortensen's Strider, a grubby ranger with a secret identity, is charismatic in the best 1960s manner; with his beard and attractive sullenness, he's a ringer for Jim Morrison of the Doors.

At times during Jackson's first installment, I'd wondered if it had touched me because I'd thought Tolkien's writing was beautiful back when I was a child. Certainly Ian McKellen's reading of the words that begin "One ring to rule them all" was as tenderizing as hearing a favorite bedtime story for the first time in years.

But what kept me watching wasn't nostalgia. McKellen has brought shadings to Gandalf's righteousness with his weaknesses, his grubbiness, his bluff. And thanks to Ian Holm's performance, you find yourself wrung out by the plight of Bilbo Baggins, snared first in ring neurosis, then in the grip of age.

As he did in his earlier film, Heavenly Creatures, director Jackson suggests that there's always more to a battle of good and evil than meets the eye.

Damn it! A whole year until the next episode.

From the December 13-19, 2001 issue of the Northern California Bohemian.