The Girls Are Back in Town

'The Baby-Sitters Club' aims at a whole new generation 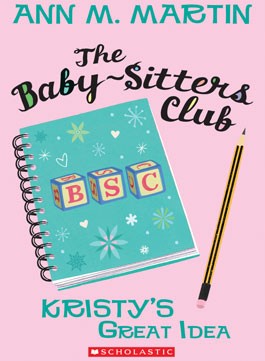 OMG! OMG!: Thirty-somethings are thrilled that their fave series still has legs.

Kristy is a softball player and a dedicated tomboy; she's bossy sometimes, but then again she's also the one with the good business sense. Claudia is hip, the kind of girl who rocks stirrup pants with a tuxedo shirt and glitter nail polish, and isn't afraid to wield a power drill to turn found objects into earrings. Sleek and beautiful Stacey, a former child model, is that intimidatingly popular girl from high school who, even as you grow up, remains the most beautiful girl you've ever seen up close. Dawn is the obvious California import, with her long, straight blonde hair, faded blue jeans and bordering-on-smug environmentalism. Quiet, modest Mary Anne is a good listener, but also kind of a crybaby.

Back before Bella met Edward the vampire, before those darned pants traveled anywhere and before Gossip Girl started a blog, there was The Baby-Sitters Club, a young adult book series about a group of girls of varying coolness who ran a business and had each other's backs. Today's preteen readers have moved on to sexier subject matter, and yet, for a book series that's been out of print for a solid 10 years, The Baby-Sitters Club has a huge, wildly devoted following—of 20- and 30-year-olds.

The Baby-Sitters Club, which ran from 1986 through 2000, was created when children's book publisher Scholastic realized there was a market eager for books about babysitting. The plots would never fly today—a group of 13-year-old babysitters who weren't CPR-certified but could solve the occasional mystery on the side—but the cast made up for what the plot lacked. The characters are very relatable, which might explain why, for so many former readers who once pored over the books at recess, they are simply unforgettable.

"I was definitely an obsessed fan," says Donica Sharpe, the blogger behind the SMS Cafeteria, so named for the fictional Stoneybrook Middle School where the babysitter girls ate lunch for 10 years. "I guess part of me still is or else I wouldn't be blogging about the books at 26 years old! For me, the BSC books are nostalgic. They're a throwback to a time and place where we weren't on the computers all the time, weren't as technology obsessed."

While author Ann M. Martin declined requests for a book series about the girls' older lives and left them stuck in a junior high, time-space continuum, they have nonetheless grown up vicariously though their fans.

McSweeney's Internet Tendency, the snarky blog arm of the independent publishing house, suggested several titles for a hypothetical "Baby-Sitters Club: The College Years," such as Claudia and the RIAA Subpoena, Kristy's Softball Friends Don't Buy It That She's Dating a Dude and Mary Anne Narcs on Her Roommate.

On her What Claudia Wore blog, Kim Hutt revisits the characters' outrageous outfits and DIY jewelry one book at a time and expounds on the similarities between BSC style and contemporary hipster fashion. When asked to choose between Mary Anne or Claudia as hypothetical roommates, Hutt blogged, "If [Claudia] was late with the rent, I bet she'd be all, 'I'm so sorry! I made you this necklace out of perler beads and Polly Pockets!' and I'd fold immediately. Also she'd wanna take bong hits and watch television while making collages out of old tabloids."

Even online gossip magazine Jezebel.com has joined the fray, penning an open letter from the much-abused, dowdy junior member Mallory Pike to author Ann M. Martin, in which Mallory laments being painted as the awkward, outcast babysitter.

Every member of the BSC has at least one regularly updated Twitter account, with #babysitterhaiku as a trending topic and Dawn sending enviro-conscious reminder tweets like "@claudia_kishi Be careful! High fructose corn syrup is a leading cause of obesity and diabetes in the United States" and "Snack break: carrot sticks and all-natural peanut butter. Need to refuel—saving the world is hard work!"

So when Scholastic relaunched the series by releasing a new prequel, The Summer Before, in April, along with a rash of paperback reprints, the BSC-centric corner of the internet exploded with both enthusiasm and criticism.

The reissued series is being targeted to a younger demographic than the original release, based on the assumption that preteens who have been steeped in vampires and the Upper East Side elite simply won't be interested in an innocent series about babysitting. And still, the series didn't make it to print entirely verbatim; references to cassette players have been updated to iPods, cell phones have been added and Stacey's bodacious signature perm has become merely an "expensive hairstyle." Babysitting rates have gone up, and even references to Stacey's diabetes and daily insulin shots have been edited since treatment of type I diabetes has advanced significantly since the '90s.

And it is these changes that have met with the most vehement criticism from invested older fans.

"I'm glad you're reading and all, stupid internet generation," writes blogger Nora Leah Sherman, "but these aren't bastions of fucking literary glory. They're books about teenage girls, and I am sad that we have to fucking SPOON FEED them to you so that they are relevant to your lives (OMG WHAT'S A WALKMAN????). The only thing that is cool about them is that they are a snapshot of what people read in the '80s and '90s."

Ultimately, whether they are carrying cassette players or mp3 players, the BSC girls face the same enduring challenges of early adolescence as any generation: Stacey explores crushes on older boys, Mary Anne struggles to assert independence from her overprotective father, Dawn moves across the country and all the girls learn about building and keeping friendships.

"There are so many books out there that involve sex and drugs for youngsters that don't really have a good message," Sharpe says. "There's a lot of drama and fighting in the series, but everything worked out in the end, and the message of true friendship remained. Their impact is evident in the multitudes of fans who grew up on the series who are now blogging and discussing the books on various sites and message boards. I have a friend who is a teacher, and she has the entire series in her classroom. Her students, some of whom probably weren't even born yet when the last book was released, are being introduced to the series."

After all, cultural is cyclical. That first generation of BSC fans is settling down to have families; many of them are going to want to introduce their daughters to the babysitters. And that is exactly what Scholastic is banking on.