Up Against the Godfather

Coppola vs. Tavola: What Gives? 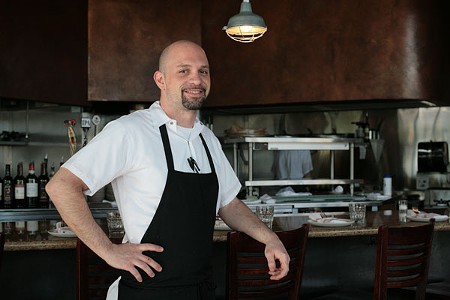 Both parties in the Francis Ford Coppola vs. Tavola Italian Kitchen lawsuit are staying mum, but the good news™ for the Novato restaurant is that the legal flap has been good for business.

Earlier this month, Francis Ford Coppola's attorneys filed suit against Tavola Italian Kitchen in Novato, claiming the restaurant's name is a trademark infringement on "a tavola," an Italian term that means "to the table," which Coppola copyrighted to describe an off-the-menu style of dining he offers at his Geyserville restaurant, Rustic. In the suit, Coppola's attorneys claim use of the term constitutes trademark infringement, unfair competition, false advertising and other transgressions—because, you know, it's easy to mistake a dinner at a $30 million restaurant and resort in Geyserville called "Rustic" for a restaurant across from Safeway in Novato.

Tavola chef Ryan Favini (pictured) says Marin County diners have rallied around the restaurant. "We've have great support from the people in the area," he said. "It definitely has not hurt us. I will tell you that."

There's no such thing as bad press™, unless you're Coppola. The director has been hammered for his heavy-handed, litigious approach. Attorneys for Coppola would not comment on the case, but they're just doing what attorneys do: filing suit. They can't be expected to have foreseen the bad publicity the suit would produce.

Well, Mr. Coppola, I have an idea. It's an offer you can't refuse.™

Tavola's owners are restaurateurs of modest means. I respectfully suggest Coppola drop the lawsuit and, in a gesture of goodwill and a celebration of Italian food that both parties love, he attend an a tavola–style dinner at Tavola. It could be a joint affair where chefs from Rustic and Tavola get together to make a meal, while Coppola and Tavola's owners break bread™ and make peace™. Profits from the meal could go to cover Tavola's legal fees. What do you say, Mr. Coppola? Come on™. Do the right thing.