Sierra Sorrentino contributed to this story. 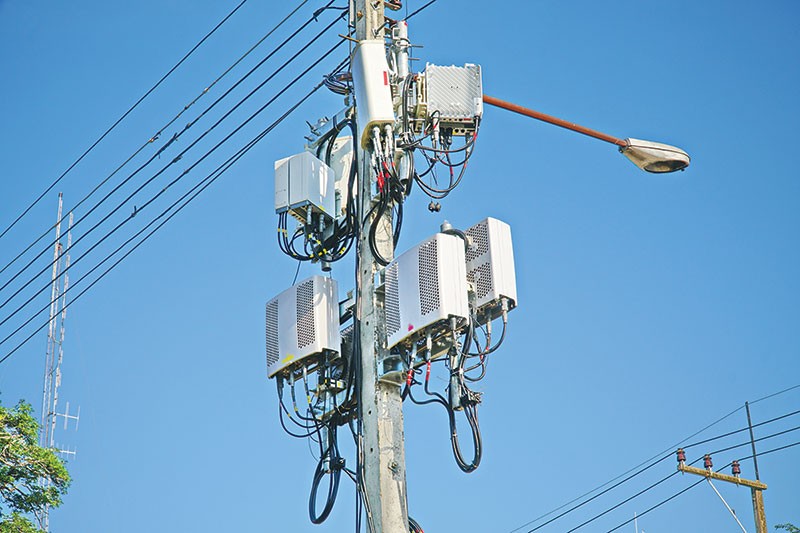 A chorus of concern is being raised over Verizon's ongoing project to install some 72 "small-cell" units on streetlights and utility poles around Santa Rosa.

At issue for residents and skeptics of Verizon is the safety of placing the signal-boosting equipment in residential areas—and for those of an engineering mindset, whether the tech upgrade is needed at all.

Tom Sawyer is a Santa Rosa resident with an engineering degree who says he has studied the Verizon plan to enhance cell service in the city. The city entered into a contract with Verizon to install the equipment last year after an independent review of regional service found the city among the worst municipalities in the country.

After a public outcry from residents over installation of the first round of small-cell towers—some on wooden poles—Santa Rosa officials pledged to work with Verizon to try and find more visually acceptable ways to deploy the technology. There was a public meeting this week and another on March 3 with Verizon officials, says Santa Rosa chief information officer Eric McHenry (who is also the city's infrastructure-technology chief). The March 3 meeting is at the Veteran's Memorial Center at 10 a.m; two other March meetings are scheduled at the Memorial Center on March 8 and 10.

But the visuals are only part of the problem, according to Sawyer. He says while he understands the risks of these small-cell towers, nobody in the city has adequately tuned into them, even as the equipment is already being deployed around town.

"At this point, no studies have been done on the effects of being around it 24/7," he says, pointing to potential risks to pregnant women and their unborn children. Further, Sawyer says he's gone around the city with friends to check their service, and finds the city and Verizon's justification to be wanting. It's all about Verizon ramping its bandwidth, he says, to compete with other cable companies.

Verizon spokeswoman Heidi Flato notes that Verizon has installed small cells in 90 cities around the state. This is the telecom giant's first small-cell foray into the North Bay, and she says the aim of the project is to increase capacity on the wireless 4G network for a citizenry that has wholly embraced digital communications.

The push in Santa Rosa is "based on more people using more devices to do more things in more places," Flato says, adding that the small cells also pave the way for Verizon's next-gen 5G rollout, scheduled for later in 2018.

"We hear this all the time: 'My phone works fine, why are you doing this?'" Flato says. But Verizon is not just focused on whether you can make the call, but whether you can sustain the call and maintain the data connection, she says. "Small cells are really designed to add capacity, 'densify' the network where we are seeing the most usage," she says. "It can be in commercial [areas], or neighborhoods as well," she adds, stressing that Verizon's only agenda is to "boost the network capacity where people are using it the most."

She says the enhancements could be of great service to residents next time a big fire breaks out.

What's Verizon's position on the claim of health risks associated with the small cells being placed in residential areas? Flato noted that the company relies on safety guidelines developed by the Federal Communications Commission, which key in on energy consumption and radio-frequency emissions. The FCC and the World Health Organization, she adds, have both studied the technology and deemed it safe.

"We always adhere to the guidelines set for us by the FCC," Flato says. "We do operate within those guidelines and typically at much lower levels of energy consumption and radio frequency emissions" than the standard set by the feds. "I'm saying we comply with all the state and federal regulations," she says, when asked about the potential health risks for residents raised by Sawyer.

McHenry says Santa Rosa has to defer to experts at the federal level when it comes to questions about public health. The aesthetic issue emerged, he says, when Verizon said it would work with PG&E and use some of their wooden utility poles to hang the gear, which came as a surprise to McHenry. Those concerns have mostly been resolved or are in the process of being resolved, he says.

One unknown factor, notes McHenry, is how the new technology will be deployed in fire damaged areas such as Coffey Park that will be rebuilt in coming months and years. "To some extent it is a fresh start," he says. In older city neighborhoods like Coffey Park, which have lots of wooden PG&E poles, McHenry says there's discussion about how cell-phone service will be managed. In the midst of Verizon's rollout of its small-cell tech, one tantalizing question McHenry raised is whether PG&E will bury its power lines in Coffey Park.

"There is time to make those decisions," he says.