How to enjoy tortillas without dying 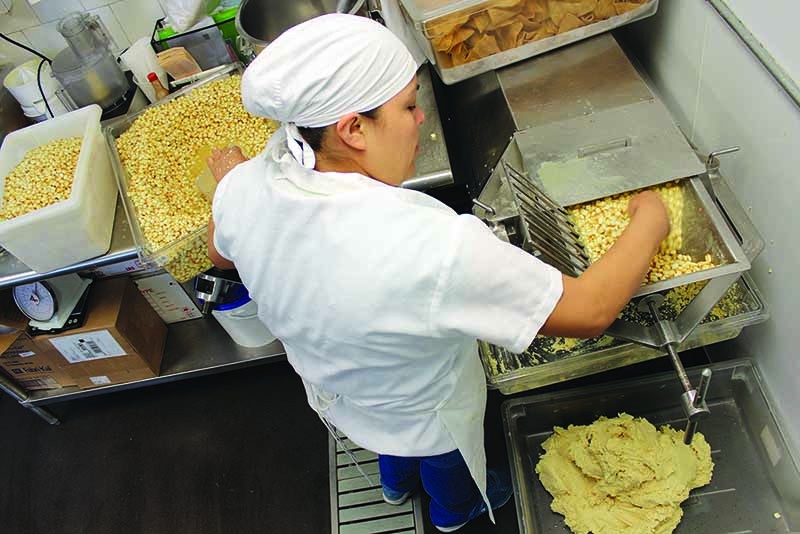 Granted, when 50 tortillas cost $2 to buy, and making them right can take a full day, practicality wins out much of the time.

But many diners only know the Taco Bell–ized version of the tortilla, and these flavorless vehicles for meat and guacamole just don't give the ancient food that powered a civilization for hundreds of years the respect it deserves.

Like most cheap food that has been around for centuries, tortillas have hung around so long because they're tasty, affordable, and have nutritious value. But, as with many modern takes on old standards, the popular version pales in comparison to the real thing.

To make a tortilla from scratch, one must start at the ground level. Burning limestone is a way to obtain lime (calcium oxide, known in markets simply as "cal"), which, when mixed with water, makes calcium hydroxide. Yes, we're still talking about tortillas, and this is where science comes into play.

One cup of this mixture is poured into a pot of water and dried field corn, which is then boiled for five minutes before being left to sit overnight. The hemicellulose and pectin in the plant's cell walls break down in the solution, and the indigestible hulls loosen. This is called nixtamalization. The calcium is absorbed in the corn and allows for the release of chemicals that allow for easier grinding and give the dough its signature texture.

Once drained, the bright yellow kernels are rinsed under cool water and rubbed together to remove the hulls. Not only does this make the corn palatable and versatile, it makes it less deadly.

In the mid 19th century, it was confirmed that corn was the cause of pellagra when a French campaign to eliminate the vegetable as a diet staple all but eradicated the deadly disease from western Europe. But it wasn't until 1938 that American scientists discovered that niacin cures pellagra, and it was even later that nixtamalization, which adds niacin and other vitamins to corn, was found to eliminate the cause of the disease altogether.

And this is something Mesoamericans were doing in the 15th century. It took us over 500 years to figure out how to stop killing ourselves with corn. That's how important this process is.

The corn's now ready for grinding, but this can't be done in a food processor. Traditionally, it's ground with a bit of water on a large, flat stone called a metate. At El Molino Central in Boyes Hot Springs, this is done daily. (A "molino" is the name of the machine and the place where corn is traditionally brought for grinding, because to do large amounts by hand would mean an absurd amount of work.)

El Molino Central's tortillas and chips are spectacular on their own, and instantly elevate anything that accompanies them. The restaurant takes pride in this—rightfully so—offering chips and tortillas to go at the counter.

Back to the tortillas (we're almost done). The dough, called masa, is made into little balls called testales. Placed between two circles cut from plastic bags, it's squished in a press and cooked on a griddle until a pocket forms in the middle. Now they're ready to be stuffed (tacos, enchiladas), fried (chips, tostadas) or just eaten right away with a little bit of butter (heaven).