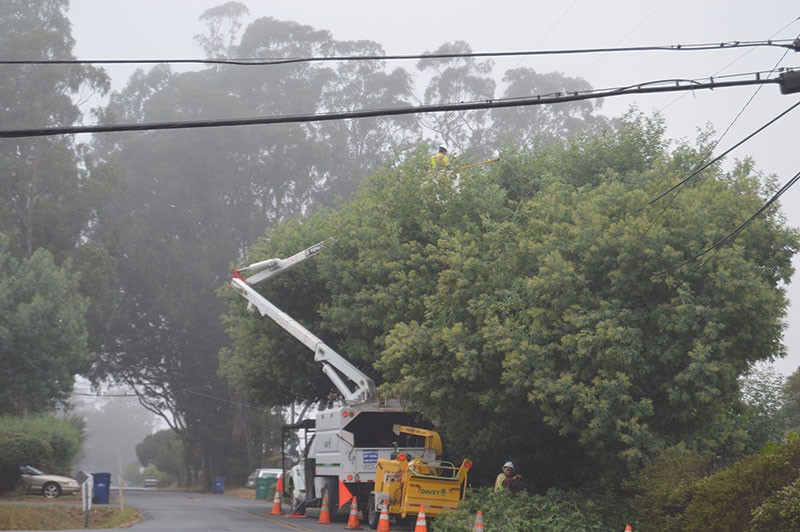 It was an interesting, observable irony: as the North Bay fires burned, tree trimmers under contract with PG&E were noticeably active around the region.

In late October, trucks from the Davey Tree Expert Company were spotted hard at work around West Marin and in places like far-flung and fire-sensitive Bolinas, cutting branches away from power lines, while smoke from Sonoma County still lingered in Hicks Valley.

The flurry of tree-trimming activity late in fire season was undertaken while firefighters from as far away as Australia battled the blazes, while no firefighters drove north from Bolinas to pitch in, given what one firefighter described recently (before the rains arrived) as "the tinderbox conditions" locally. So, shouldn't the trees be trimmed before fire season, and not while fires are actually burning?

State law requires that PG&E, an investor-owned company and the largest utility in the state, maintain a buffer zone of 18 inches to eight feet between tree branches and its power lines (the buffer space depends on the voltage of the power lines). The company does this through its Vegetation Management Program. Yet it appeared the company had some catching up to do on that front in late October, at least in West Marin. Davey provides tree-trimming services in Marin, Sonoma and Napa counties under its contract with PG&E.

Davey, an employee-owned company based in Kent, Ohio, with business throughout the United States, says the regional tree-trimming work is on schedule under the terms of its four-year contract with PG&E, which runs through December 2019.

"Routine work schedules for 2017 are proceeding as planned with the assigned local crews," says Davey spokeswoman Jennifer Lennox in response to an inquiry about the apparent recent uptick in tree-trimming activities in West Marin.

"Davey has provided additional resources from outside of the Marin/Sonoma/Napa operations," she adds, "to assist in power restoration in the fire areas."

If, as Joe Biden likes to say, the past is indeed prologue, then tree-trimming activities in the North Bay will likely come into sharper focus in coming months as questions about accountability are sorted out by Cal Fire investigators, plaintiff's lawyers and civil juries.

PG&E-contracted tree trimmers, including Davey, have been roped in on previous lawsuits centered on wildfires and power lines as recently as 2015.

A lawsuit filed on behalf of victims of the 2015 Butte fire in Amador County against PG&E and Trees Inc. claims the utility and its contractor were negligent in tree-trimming activities, and that the fire started when power lines came into contact with a tree.

According to the plaintiff's representation in that case, Singleton Law Firm based in San Andreas, Calif., one trigger for that suit was a statement made by PG&E and Cal Fire after the blaze which said "that the Butte fire was likely caused by a tree maintained by PG&E and Trees Inc. coming into contact with a PG&E power line near the ignition point in Amador County," according to the Singleton website.

Davey Tree has been caught up in at least one fire-related lawsuit brought against the utility. The U.S. Forest Service sued PG&E and Davey for their role in the 2008 Whiskey fire in Mendocino National Forest, when branches from a gray pine tree that were two feet from power lines ignited and burned some 5,000 acres at a cost of $5 million, according to Forest Service documents.

PG&E, Davey and a second contractor, ACRT Inc., were ordered to pay $5.5 million, split among the parties, all of whom denied any liability for the fire even as they agreed to the settlement.

As for the recent fires, which dwarf the Whiskey and Butte fires in their scale and damage, PG&E has already been sued in state superior court by dozens of burned-out residents for its alleged role in the fires.

But Davey Tree is so far not a part of the public chain of accountability stemming from the North Bay Fires—even as local radio stations are heavy with advertising from plaintiff's law firms who say inadequate attention to tree trimming played a role in the historic October fires.