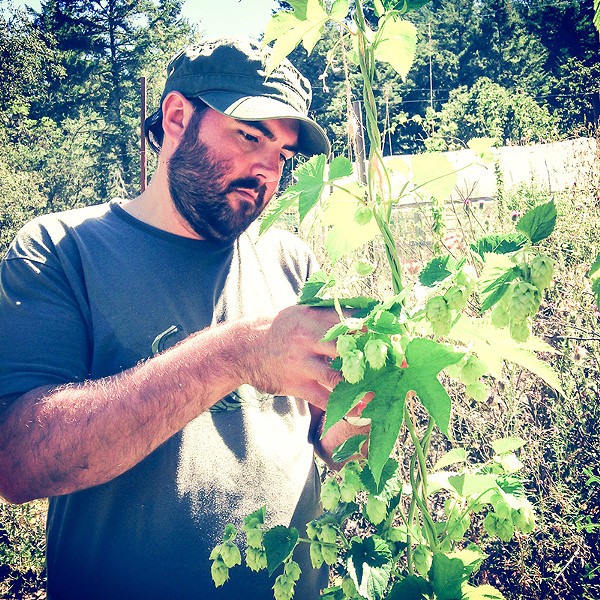 They may both be sons of winemakers, but that hasn't stopped Remy Martin and Paul Hawley from venturing into the brewery business. Martin, whose father has served as winemaker at Fetzer Vineyards for 30 years, graduated from the UC Davis master brewer program, while Hawley, whose father is a former winemaker at Kendall-Jackson and current owner of Hawley Vineyards, has been homebrewing for over 10 years with Martin since the two traveled together to New Zealand to work in wineries.

With a focus on locally grown hops and locally sourced ingredients, their Fogbelt Brewing Co. is at the forefront of the latest wave in craft beer: utilizing hyperlocal ingredients and, as with wine, barrel-aging for depth of flavor. Their Belgian-style Witbier is spiced with fresh cilantro and kaffir lime leaves grown right on the premises; hops for a fresh-hopped saison are harvested from Hawley's 150-vine Dry Creek Valley hop yard.

"Working in wine has given us a perspective on where beer is going," says Hawley, as he speaks glowingly of Sonoma County's "great" agriculture and illustrious history as a hop-growing region. "Ten years ago, nobody cared about the variety of hops in a beer, but now people do," he says. "The next logical step is to care about the growing region."

As the brewery hits full production in October, they'll churn out a few hundred gallons a month on a seven-barrel system, with a focus on four flagship beers, including a malty, roasty India pale ale and a light, effervescent American blonde ale. These are primarily hopped with Cascade, Chinook and magnum hops sourced from Dry Creek as well as a 350-vine hop yard run by a Ph.D. in botany in Sonoma Valley.

Eventually, they'd like to produce all of their own hops locally, instead of sourcing them from Washington, says Martin. "It's satisfying, because you put so much effort into taking care of them every year," he adds. "And it's satisfying knowing you have a lot to do with the natural process."