The Puppet Workshop and Festival 2000 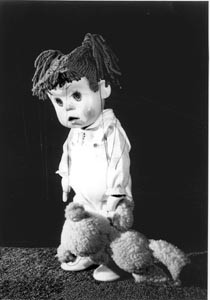 Polly at the Puppet Fest.

Marionettes hang out at Jarvis Conservatory during Puppet Fest

EVEN THE MOST jaded child, force-fed an incessant diet of TV murders and video-arcade violence, can usually suspend disbelief long enough to be enticingly drawn in by the age-old enchantment of puppetry. And we're not talking "media puppetry," a catch-all term used for film, video, and computer technology's electronic interpretations of the ancient art form.

"Despite exciting technical developments, media puppetry rarely is used to its fullest advantage because few directors and producers can imagine the possibilities," explains longtime puppeteer Leman Coad of Vancouver-based Coad Canada Puppets. "Also, film and video don't encourage the audience's imagination. Everything is spelled out in the finest detail."

So here we're talking about becoming transfixed by decidedly low-tech blocks of wood and chunks of foam--which actually make the most magical puppets of all.

The spellbinding quality of giving life to an inanimate object evokes a unique and universal response from both children and adults. Puppeteers call it a pure form of theater that allows the audience to believe in the character and even invest emotion in it.

"Puppetry doesn't just allow, it encourages audiences to use their imagination," adds Coad. "Good puppetry suggests very clearly, then backs off to allow the audience to fill in the details. The magic of puppetry is the spectator suspending reality and believing the object of wood, paint, and fabric is a thinking, feeling character."

Coad will be bringing his string marionettes to the Napa's Jarvis Conservatory for the Puppet Workshop and Festival 2000, where his dolls will share billing with Missouri-based Parasol Puppets. Parasol Puppets will perform Circus using handcrafted hand puppets. Coad Canada Puppets will perform Polly, a mime show with marionettes. (Puppeteers maneuver a hand puppet with their hand concealed inside the figure; they move a marionette by manipulating strings or wires from above.)

Polly is essentially a character study of a small child. The production is a series of vignettes with a thin story line to tie them together, but the focus is on Polly's mental and emotional processes. "I think the show works because Polly taps into the infant in each of us," explains Coad.

The puppeteers will lead a hands-on workshop preceding Saturday's matinee. Debbie Lutzsky Allen of Parasol Puppets will show participants how to create puppets, which they will be able to keep. Coad will provide insight into the technique and history of puppet theater and demonstrate the basic skills of how to manipulate the marionettes.

"My approach to puppetry is to simplify. Eliminate all the nonessentials so only the essence remains," says Coad. "Then I step back and allow the audience to participate with their imaginations."

From the September 21-27, 2000 issue of the Sonoma County Independent.