Joseph Tucker's RateBeer.com can make or break a craft brewer, keystroke by keystroke 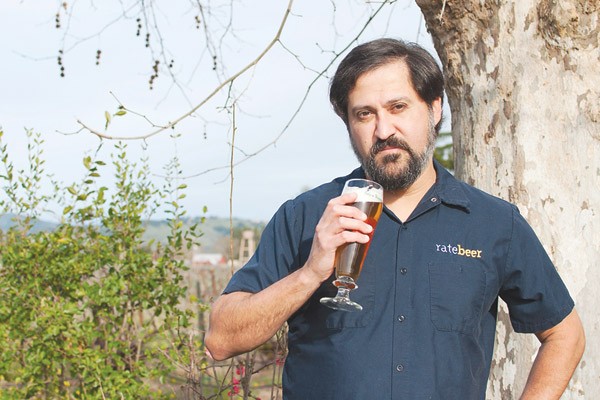 If there are any clear distinctions to be made between contemporary beer and wine cultures, perhaps one of the most immediate is the very different role critics play in each. The beer world, despite the innovations and heightened public regard achieved over the past few decades, still has no equivalent to a Robert Parker or Stephen Tanzer or Eric Asimov. Even the most influential modern beer writer, the late Michael Jackson, never held such sway over the market. Instead, for better or worse, the major market drivers in craft beer culture tend to be user-based websites—like RateBeer.com.

RateBeer is one of the two major collectors of online beer reviews, the other being Boston-based website BeerAdvocate.com. Anyone of legal drinking age may sign up for a free user account at either site and post his or her own reviews of, essentially, any commercial beers in existence. RateBeer has the larger of the two databases, with over 120,000 beer listings, an international ensemble of 75-plus regional beer experts charged with curating the site and, at latest count, over 3.5 million user-submitted beer reviews. (Disclosure #1: Approximately 0.1 percent of those reviews are mine.)

Instead of beer scores being generated via a single person or a small panel of experts, the overall scores on RateBeer are calculated as an aggregate of user-submitted scores, giving an equal weighting to every person who submits a review—no credentials or monocles required. When one sees RateBeer shelf tags hanging at a Whole Foods or specialty beer shop, there's no mention of individual reviewers.

Even RateBeer's owner prefers to eschew the spotlight.

Local beer lovers are often surprised to learn that Joseph Tucker, owner and executive director of RateBeer, lives in Fulton. Though he relocated to Sonoma County with his family back in 2005 ("It's always struck me as the best place to raise a kid anywhere in the world"), Tucker has resisted establishing much of a local presence for RateBeer.

On a warm February afternoon, sipping a glass of rustic saison from Green Flash Brewing Company and overlooking the vineyards bordering the Tuckers' back patio, I wanted to determine why that was, as well as discuss the implications of these crowd-sourced rating systems. (Disclosure #2: This is hardly the first time Joe's plied me with beer, and I consider him a dear friend. When I attempt to sell you RateBeer-branded cutlery at the end of this article, be wary.)

A UC San Diego graduate, Tucker has spent much of his time kicking around the Bay Area, taking up residence in San Francisco, Oakland, Berkeley and elsewhere. During the dotcom boom, he worked as a technical producer at CNET and CMP's NetGuide, and in entertainment software at Trilobyte, helping develop classic old-school computer games like the 11th Hour.

This user-based mindset influenced how RateBeer was internally developed. Bill Buchanan originally started the site back in 2000 with a few others, but offered it to Tucker for free after the latter spent a summer helping redesign the entire site. Since then, the majority of Tucker's time has been focused on developing RateBeer into the international presence it's since become.

"The whole idea [developing software] was you listen to people and craft an experience to make it enjoyable for whoever's using it. It's the way that we build RateBeer. We talk to people. We try to keep it fun. We look at what people are passionate about, and we feed that passion."

Establishing local visibility has generally been less of a priority. The website BeerAdvocate, as a counterpoint, has spun off a print magazine and hosts highly regarded beer festivals in Boston each year. "I'm not a business guy," Tucker explained. "I'm primarily a toymaker. My focus has always been on building toys." And public relations? "It's not something I'm particularly good at."

With Tucker and his team of internal admins (Disclosure #3: I used to be one) focusing on site development, RateBeer's reach and influence have steadily grown. As Joe notes in our conversation, in the craft beer world, "traditional marketing doesn't work too well." The typical sports imagery with buxom females tends to be derided, seen as vestigial tricks of the mass-market breweries.