Development, jobs and housing prices on the rise along Highway 101 in Marin and Sonoma 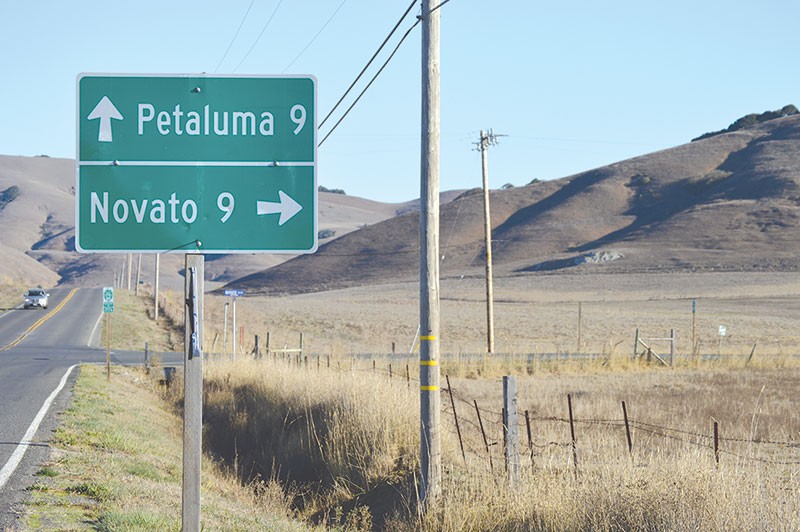 But amid a generally cheery post-recession outlook across Marin and Sonoma counties, there are warning signs. Traffic is worsening on Highway 101, air quality is still great in Sonoma County but not every day, there's scant affordable housing for working people in Marin and Sonoma counties, and there's built-in pressure on two key North Bay resources: water and open space.

The latter issue, open space, has emerged as a hot-button issue in busting-at-the-seams Petaluma, but Ben Stone, executive director of the Sonoma County Economic Board, says the county and city of Petaluma have enacted highly restrictive open space rules that will serve to honor the agricultural character of the area—and aren't likely to go anywhere anytime soon.

"We're kind of lucky to have these urban-rural boundaries to prevent development outside the agreed-upon urban-growth boundaries," Stone says. "That space should be locked up."

Yet the jobs are coming and so are the people. The Association of Bay Area Governments issued a report a few years ago that predicted Marin County would see 18,400 new jobs between 2010 and 2040; over that same time, Sonoma County is expected to see 65,450 new jobs. The counties' populations over that stretch are expected to rise by 33,000 in Marin and 115,000 in Sonoma County. But there are dwindling options as to where to put everybody.

South of Petaluma, when it comes to development and jobs, "You can go up [Highway 101], or you can redevelop parcels that are dilapidated, says Dr. Robert Eyler, chief economist for the Marin Economic Forum. "You can have that construction, great, but people don't like that either. It's a classic First World pickle where there are lots of high-end incomes here, and the people don't like the density." (Sonoma County's population hovers around a half-million; Marin's is about half that.)

All of this is going on in the midst of a big housing crunch in Sonoma and Marin counties, as the just-released "2015 Sonoma Indicators" report notes.

The report, issued by the Sonoma County Economic Development Board, found that residential development in the North Bay has not rebounded to pre-recession levels, as would-be buyers watched the median price for a Marin County house eclipse $1 million this year, and reach the $540,000 level in Sonoma County.

The report's major takeaway is a rosy one: the county has a "high level of economic activity and a healthy business environment."

But the report also notes that wages haven't caught up with the recovery and that there are other unhealthy signs in the air. Residential rents have reached new levels of unaffordability, even as commercial lease rates in Marin and Sonoma counties are lower than in comparable counties such as Santa Clara. The economic development board report found that office space in Santa Clara County is $2.26 per square foot; in Sonoma County, it's $1.57. Sonoma's average is 50 cents per square foot less than Marin County. Weekly wages in Sonoma County are below the state and national average at $913 and median home prices in the county are creeping near the all time, pre-recession high of $619,000, set in 2005.

The median-home spike is also true in Marin County; neither Sonoma nor Marin counties has seen its construction industries rebound to pre-recession levels. According to an Association of Bay Area Governments report from late 2014, Marin County issued building permits for 1,000 new housing units in 2005, compared to just 302 in 2013. Sonoma County issued permits for about 3,000 new houses in 2005, compared with 1,000 in 2013.

In Marin County, there's just not a whole lot of available space left, says Eyler—only about 2 percent of vacant land is developable, he says, and observes that developers have the choice to "eat up whatever available space is left along the Highway 101 corridor, or head north."

"How far north is too far for commuters?" he asks, invoking the late-to-arrive SMART system and its potential benefit to San Francisco commuters headed north. The answer to the hypothetical question may well be: Anywhere north of Petaluma.

"Certainly Petaluma is going through an amazing renaissance right now," Eyler says. He ascribes the influx of new businesses and young people to Petaluma's relative proximity to San Francisco, good planning by city leaders and by the fact that the word has gotten out.

"The word of mouth about Petaluma has spread very well," he says.

As boomtown Petaluma comes into its own, the city and county have done a good job protecting open space. In 2002, there were 125,196 acres of protected space in the county. A flurry of open-space protection efforts shot that number to 218,267 acres by 2013.

Meanwhile, in Marin County, forecasters at the Marin Economic Forum released a report on Oct. 29, which summed up the economic development conundrum for the Bay Area as a whole: "Available office space in San Francisco has now become smaller in volume and choice," the report noted. "Office space remains plentiful in the region overall. . . . The placement of both new commercial and residential units in Marin County has continued to be a controversial subject for the county elected officials and local residents and employers."

The report highlighted drought, traffic and potential environmental impacts to the North Bay as the Bay Area may see its population grow from 7 million to 9 million within 25 years.

How to accommodate growth yet retain the open space and quality of life that the North Bay is known for?

Good question. Enter 2013's "Plan Bay Area" report from the regional Association of Bay Area Governments. The plan advises North Bay leaders to focus development along the Highway 101 corridor in Marin County, and in the downtowns of cities strung along Highway 101 in Sonoma and Marin counties: San Rafael, Santa Rosa and Petaluma.

Wither Novato in all this? "Novato is where you go when you want to stay in Marin but don't want to pay the rents in Mill Valley and Sausalito," Eyler says.

And it's also home to its own growing industry of life-sciences research. Chris Stewart, Novato's city manager for economic development, says Petaluma and Novato both have a lot going for them these days. Novato, he says, has lots of built-in opportunity for future development, but unlike the roaring boom underway in Petaluma, "fully seizing [the opportunity] is the issue in Novato," Stewart says.

The departure of a reported 650 jobs from the Fireman's Fund building earlier this year didn't help promote Novato as a go-to destination for corporations tired of the San Francisco rents, Stewart says. The mostly vacant building is essentially a white elephant. It's unclear who might occupy the space deserted by Fireman's Fund, but it's not going to be Google, as rumors would have it.

The property's debt load ($300 million) and vast amounts of square footage, Stewart says, add up to rent that is comparable to what you'd pay in San Francisco. "It's not the most cost-attractive alternative for the high-tech industry," Stewart says.

The departure of Fireman's Fund this year cost Marin County numerous jobs, as the insurance firm's German owners, Allianz, said it would send the workers to an office space on North McDowell Boulevard in Petaluma beginning this month. Business boosters in that town exalted with news of 500 Allianz workers shopping in town.

Down the congested highway a few miles, Novato's future is pegged to an emergent life-sciences industry that Google is already hooked into. And so it's kind of ironic when a Novato-based life insurance company pulls up stakes for Petaluma and leaves a county where the economic driver is now geared toward living forever.

A partnership with Google helped set Marin County on a possible boom footing of its own. Back in April, the geroscientists at the Buck Institute for Research on Aging announced a partnership with Calico, a Google-created business devoted to life-extension research and development. Google wants to end death as we know it, quipped Time in 2013. The Marin Economic Forum's Eyler notes that the irony is even richer when you consider Marin's aging but generally sprightly demographic—the county is home to the oldest average population in the state.