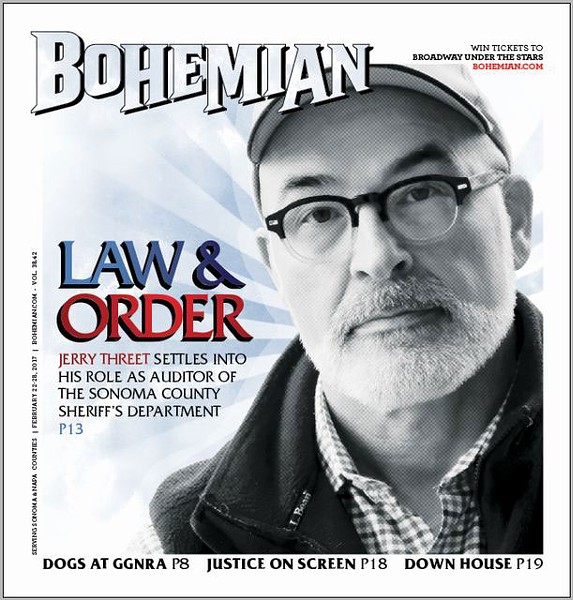 Jerry Threet's desk is overflowing with papers and files, and right on the top of the inbox is a print-out of a story from the Washington Examiner that ran a couple of weeks ago. The article told of how Sonoma County sheriff Steve Freitas was one of six California sheriffs who attended a recent meeting in Washington, D.C., with United States Attorney General Jeff Sessions, no friend of undocumented immigrants.

The story raised eyebrows and questions around the county, with its outsized population of the undocumented and Trump's big deportation push right out of the gate. At the center of it all in Sonoma County is Threet, who's just about to finish his first year as director of the county's new Independent Office of Law Enforcement Review and Outreach (IOLERO), created in the aftermath of the 2013 shooting of teenager Andy Lopez by a sheriff's deputy.

We met recently at his office on County Center Drive on two separate occasions, and I asked Threet, a former San Francisco city attorney, to talk about his first year on the job—the biggest challenges and surprises and impressions he has of policing in Sonoma County, what works, what doesn't and what's he doing about it. Questions and answers have been edited for clarity.

Bohemian: What are the basic functions of your job, and how do you respond to a criticism or a perception that's been leveled at the IOLERO that its biases are with the community over the sheriff's department?

Jerry Threet: We do work with the sheriff's office, and we have to. It's part of the charge of the office to bridge the gaps that people perceive between certain communities and the sheriff, but primarily we're here to serve the community. If folks have complaints about deputies, we're there as an extra set of eyes, independent of the sheriff's office, to give the community assurances that these investigations are being done appropriately. We also take complaints here.

We know people feel uncomfortable, for a lot of reasons, and some of that has to do with this immigration order that we're looking at now, if they come here now. You can file a complaint here, and I think that provides a level of comfort, and also helps with the process, helps to get everything that's relevant in the complaint. And that function has to be a neutral function—the obligation there is to the truth of what happened, not to the deputies, not to the community, but to the truth. And I think that's really where you get the confidence—sometimes maybe you're saying that this [arrest] wasn't done correctly, and we disagree with the sheriff's conclusions, and sometimes you say, "Well, yeah, they did do it correctly, and the complainant is not correct on the facts," and that's not a surprising thing because if you think about these encounters, they are really stressful encounters. And the memory that folks have of stressful encounters is not really great in recall.

Are there particular challenges for Sonoma County, given its size, the various communities that SCSO is responsible for, and any particulars of staffing at the sheriff's department?

There's undeniably a problem around that, and the issue there is staffing. If you look at the staffing of the county for the deputies on each shift, it requires that there be one deputy per car, and usually that's the only deputy that's going to respond to a call for service; particularly in some of the districts, the calls for service can be a wide distance from each other. So even getting to a call for service can take a really long time, and that deputy is out there on [his] own, [he] can't really expect backup for a long time if something goes wrong. It makes it difficult to get to know community members when they are living in a rural setting on large parcels of land far apart from each other, and there's less of a central community, a center where people gather and interact with one another—those are all challenges for the sheriff's department.

What are the ways that you work with these realities and seek to improve policing in the county?

I do think that a greater community-oriented focus would be helpful for the sheriff's department, and for communities in particular in those unincorporated parts of the county that are more dense. One of those is the Moorland-Roseland area, and the other is the Springs. Those also happen to be the areas where there are significant Latino and immigrant communities, which have their own unique challenges for the department. So I think it would make sense to put in place, and I'm advocating for, pilot programs in community policing for those two areas. There are some grant opportunities coming up in a two-year cycle, that come from the state in 2018, and I'm trying to put together a team to put together a package for that. That's something that would require partnering with community groups in those areas, which I think would be a win-win all the way around.