Wine-buddy story goes from print and screen to stage 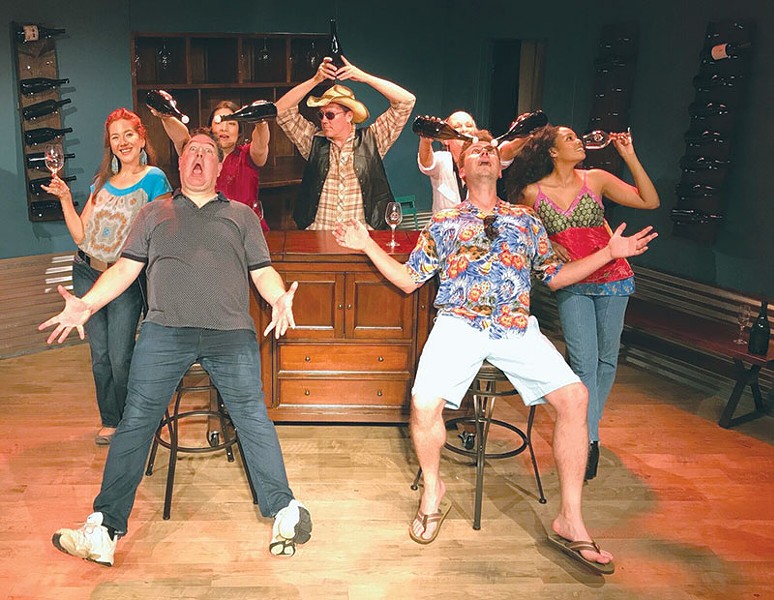 Appropriately enough for a stage show based on Rex Pickett's raunchy, gleefully bacchanalian novel Sideways, there is a lot of vino consumed over the course of the stage version's nearly two-and-a-half-hour running time.

In Left Edge Theatre's world premiere of Pickett's own adaptation—significantly stripped down from the versions previously seen in London and L.A.—bottles and bottles of wine are uncorked and consumed, each one ceremoniously archived on one of several wall-mounted wine racks hanging here and there across director Argo Thompson's spare, effective, and highly adaptable set.

Miles (Ron Severdia, trading Giamatti's high-strung self-hatred for an amiably laconic, soul-crippling fear) is a barely functioning, would-be novelist, part-time wine aficionado and full-time depressive whose fragile self-esteem (what remains of it) is dependent on his latest detective novel being picked up by the publisher currently considering it. As he waits anxiously for word from his agent, Miles acts as tour guide and wine instructor for his amoral, longtime actor-director friend Jack (Chris Ginesi, expertly capturing his character's delightfully dim, affably caddish attitude), who hopes to commit a few final acts of oat-sowing before his wedding at week's end.

The pair's path soon crosses with two wine-loving friends. Maya (Maureen O'Neill, excellent), who has turned a bad marriage into a passion for wine-making, clearly likes Miles, enjoying his enological verbosity, while Terra (Jazmine Pierce, all sweetness and steel), a fiery tasting-room party girl, falls hard for Jack, who begins to return the favor. A variety of supporting characters are played by the first-rate team of Kimberly Kalember, Mark Bradbury and Angela Squire.

As Pickett's bittersweet tale progresses through a sometimes hilarious, sometimes moving, sometimes achingly sad series of escalating successes and disasters, Miles and Jack's friendship, the real theme of this story, is tested again and again. The production's pace could stand to be picked up a bit, and the final moments of the play feel a bit too tidy. But on the whole, this cleverly faithful, wine-soaked journey through hope and disappointment is much more than just quaffable; it's a road trip well worth taking.