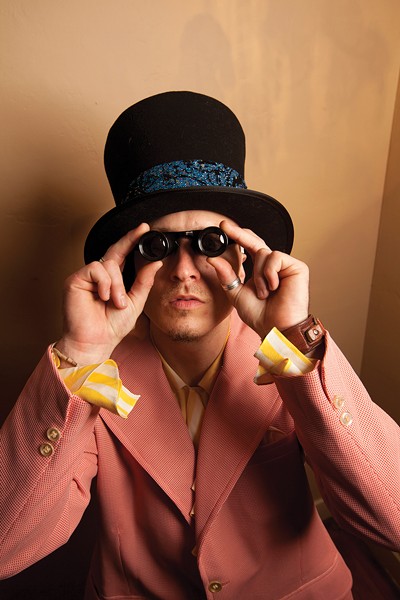 Electronic dance records were once sold on vinyl. Back then, "house heads" could explore everything from deep tribal bass to lounge house and Eurotrance on open turntables tied to giant headphones at record stores. If you remember the Santa Rosa store Harmonics or Oakland's Homebase, you remember the days.

The landscape has changed dramatically since the late '90s rave scene, but the rhythm continues to seduce. Sebastopol native Patrick Malone has spent 15 years cultivating his knowledge of electronic music. From raver to promoter to talent buyer, Malone is a one-man party planner, and a damn good one at that. A trained audio engineer who performs under the moniker DJ Malarkey, Malone is the founder of Juke Joint, the Thursday-night showcase that put Sebastopol on the electronic music map.

For more than a decade, Malone has been a fixture at what is now known as the Hopmonk Tavern, from its days as the Powerhouse and the Sebastopol Brewing Company. He drove U-Haul trailers into Santa Rosa just to borrow the equipment capable of producing the sound needed for electronic shows.

When the brewery was bought by Dean Biersch, the newly inaugurated Hopmonk Tavern handed Malone the role of talent buyer in 2008, and "the Abbey" has since become his kingdom of noise. "It was a dream come true for someone like me, in my mid-20s," he says, "to have someone say, 'Here's a budget, let's put in a serious, real-deal sound system.'"

Changing up formats, too, has had a major impact. Malone began experimenting with new genres, incorporating funk and break beats, hip-hop and Latin to create palatability for the small-town vibe. Over the years, he's added a number of cultural experiments, from the risqué burlesque variety show Cabaret de Caliente to live Edwardian Gypsy bands.

The décor, too, transforms with each weekly event. His 12 consecutive years at Burning Man have leant a unique habitat hardly matched outside the City. Most of all, in keeping with Juke Joint's tradition of top-notch electronica, Malone continues to host some of the biggest international DJs. (Last month in the 200-capacity room, he booked Bonobo, who headlines the Warfield, the San Francisco venue that's over 10 times Hopmonk's size, in May.)

Now, six years later and bringing back their first-ever guest, Juke Joint presents genre-bending genius J Boogie on Feb. 7 for a night of indulgence and dance. Bonus: be there for a major announcement guaranteed to stir up the electronic music scene for good.