Does Efren Carrillo have a political future? 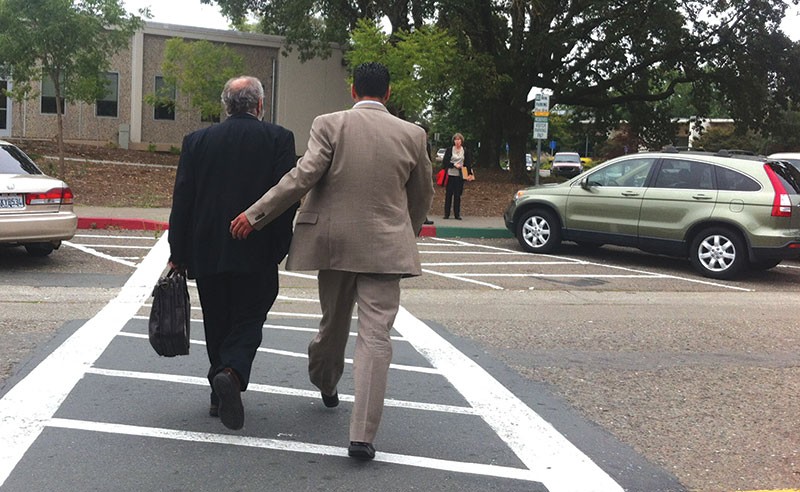 The morning after Sonoma County Supervisor Efren Carrillo was arrested on Aug. 20 on suspicion of prowling and burglary, infamously clothed in only his socks and underwear after reportedly attempting to enter a woman's bedroom at 3am, he admitted that alcohol was involved and said, "I realize that my behavior was embarrassing."

But embarrassment might be the least of Carrillo's troubles. Since his arrest and subsequent trip to rehab, he's heard his fellow supervisors condemn his actions and question whether he's fit to serve on the board. Add to that a mounting recall effort and possible criminal charges at an upcoming court date this week, and it appears Carrillo has much more to worry about than embarrassment.

But even so, Carrillo's goose might not be cooked.

"He can weather this," says Sonoma State University political scientist David McCuan. Though a felony conviction would mean automatic removal from office, McCuan suggests Carrillo's career could survive if charges were dropped, if he were acquitted of a felony or even if he were convicted of a misdemeanor. "Voters love to forgive their politicians, but they don't always reward them," says McCuan, suggesting Carrillo's aspirations for higher office may be dashed. "He has a long time to look at reelection, but he won't move up."

Since his arrest, Carrillo's sentencing hearing has been postponed three times; the current court date is set for Friday, Nov. 1, but that could be postponed yet again if prosecutor Cody Hunt of the Napa district attorney's office—which has been characterized as notoriously aggressive—asks for more time to build his case.

In the meantime, many have cast the ongoing delays as a plot by Carrillo's side to buy time for solidifying a more bulletproof story. Rosanne Darling, the lawyer representing the unidentified woman who called 911 twice before Carrillo's arrest, said at the Oct. 18 hearing that she felt the most recent postponement was politically motivated. Chris Andrian, Carrillo's lawyer, says Darling, a former Sonoma County prosecutor herself, should know that court cases are often delayed multiple times, and that this isn't a political move. Efren Carrillo, meanwhile, repeats the mantra of "No comment."

Carrillo is playing it safe in the wake of the scandal, a story that has legs internationally; McCuan says he's fielded calls about the case nationally and from as far away as London and Singapore. With the public keeping a close eye on the story, a recall effort would have to be well orchestrated, including finding the right replacement candidate, says McCuan.

"We don't want to do it and not be successful," says Alice Chan, leader of the Coalition for Grassroots Progress, the group organizing the recall effort. After initially announcing they would press forward with a recall on Sept. 15, the group has since backed off, waiting for more information and political strategies to play out. The North Bay Labor Council, a group representing 71 labor unions in California, has come out in support of a recall effort and would be able to bankroll the potential $200,000 cost. There's just one missing piece of the puzzle: a viable candidate to replace Carrillo.

"We are identifying a candidate that, for the voters of the 5th District, will be preferable," says Chan, a 5th District voter. "We would definitely want to elect someone to replace Efren who is progressive."

If he feared a recall effort might be successful, Carrillo could resign, and Gov. Jerry Brown would appoint a replacement to fill the seat until the next election cycle. Carrillo's friend and close political ally, former U.S. Congressman and Press Democrat co-owner Doug Bosco, certainly has Gov. Brown's ear as far as a replacement goes—Bosco has hosted fundraising parties, with Brown in attendance, in his McDonald Avenue home in Santa Rosa, and would be all too willing to suggest a replacement.

Carrillo, who won reelection in 2012 by a landslide, could possibly even weather a recall effort, says McCuan. "There is a current of support that is deeper than Doug Bosco," he says, "deeper than others in the community that he might be allied with."