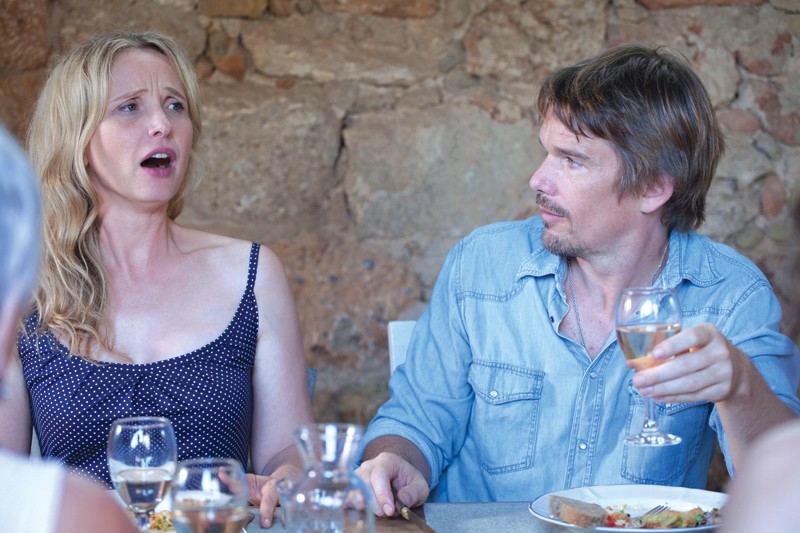 Those two young lovers of 1994's Before Sunset——Celine, a Parisienne (Julie Delpy), and Jesse, a Chicagoan (Ethan Hawke)—have aged. In Richard Linklater's Before Midnight, they're successful but burdened middle-agers on vacation in Greece. He has a major child-custody problem back in the States. She's working out career challenges, and will have to start from scratch if she follows him back to America.

Celine and Jesse share a summer's evening walk through the ruins, and are more unnerved by modern America than ancient Rome. They have an American-style tourist bed waiting for them in an upscale hotel, with complimentary wine and couple's massage. "It's the Garden of Eden," Jesse says, but this new Eve begs to differ.

Delpy resembles Diane Keaton in the Woody Allen comedies, a bundle of nerves so snarled it's impossible to keep from twisting one by accident. She's a ditherer, her long eyebrows meeting in circumflex over anxious, hollow eyes. When this actor-director is filming herself, she seems sort of bodiless; Linklater, however, sees Delpy as a physical being, sounding a note of lewdness, seeing the alluring qualities of the middle-aged spread Celine can't cease lamenting.

Hawke's Jesse seeks a balance between manliness and boyishness, and he never feels at ease with either, particularly in the excellent first scenes where he's saying goodbye to his son at the airport. Strange to see how Hawke, this handsome if lightweight bohemian, is turning out to sound like Tom Waits.

Before Midnight is marred by a long dinner scene of allegedly literary talk, but it's an unconvincing, unnecessary side trip from the couple's woes. Their quarrel is where we want to be—that's where things are witty, aggravating and romantic. Every couple is ultimately under the volcano—the ability to endure a petty, scab-picking fight is the essence of a couple's survival in times when, as the cartoonist B. Kliban put it, "the wagon of love breaks down under the luggage of life."

'Before Midnight' is playing in wide release.