At long last, a trend toward tipping at the tasting room 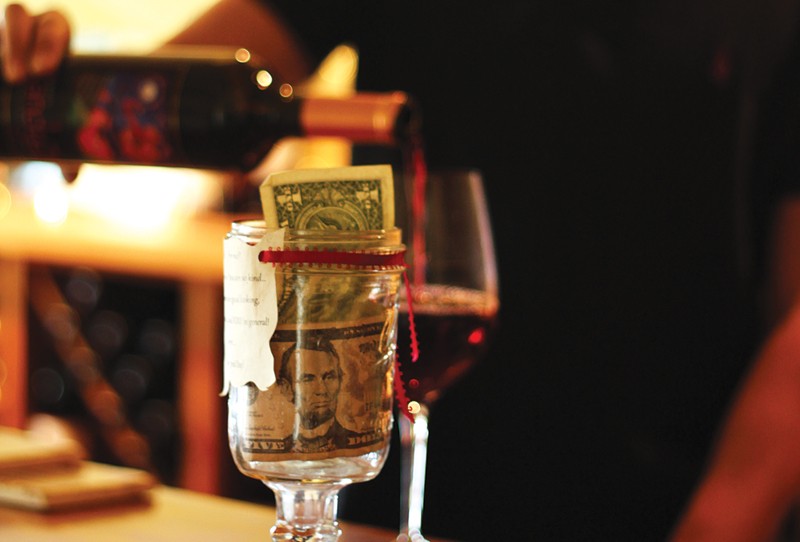 When a bartender pours a beer, he gets a buck. Maybe two or three, all but guaranteed, even if his service includes first ignoring the customer for several minutes, chatting it up with the little blonde who's wriggled to the front of the line, and then, if time permits, pulling a tap for five seconds.

Compare it to the job of the tasting-room host. She greets everyone who wanders in, even if they're peering in the doorway with much hesitation. If there's no room at the bar, she makes room. She tells them the winemaker's story and technical information on the vintage, including the percentage of each grape cultivar, their names pronounced correctly in French, Italian or German. There may be cheese pairings, concierge service and a long, informative conversation. The customer might walk away with a $600 case of wine, while the employee punches the clock for a $12 hourly wage.

Is it time to have a conversation about tips in the tasting room? Given that the grumbling over a tasting fee of any kind can still be heard in some corners of wine country, it may be a challenge.

At Harvest Moon, employees even hung a cheeky little plea for tips to a discreet jar on the counter—like you'd see at any coffee shop. But their supportive boss is right behind them. "Our staff spends 35 minutes passionately discussing winegrowing philosophies and vineyard-management techniques, pouring various samples of our tiny production wines, and we gotta fight—sometimes—for a lousy $10 tasting fee," winemaker Randy Pitts explains. Comparing what they offer to the dining experience, Pitts asks, "Can one visit a restaurant and say, 'I'm not sure if I'll like your calamari—may I try some first?'"

The proliferation of small plates and food pairings in tasting rooms brings the tip question forward. After sinking into deep cushions on Mumm Napa's Oak Terrace, for instance, and enjoying a $40 flight of sparkling wine with gourmet snacks, the average person may feel uneasy not leaving a little extra for their host. Yet there is no tip line on Mumm's credit card receipt. "If people ask," says assistant visitor center manager Lauralee Larson, "we tell them it's not expected. We don't forbid it or encourage it."

Elsewhere, it's expressly forbidden, according to Sean Beehler—or so he's heard. Beehler slings Zin at St. Anne's Crossing, where tipping is fine, just uncommon. Having grown up in wine country, that's all right with him. But some visitors ask him what they should do, since at the last winery they were told, "Oh, no, we can't. There are cameras everywhere!" while at another, there was a tip jar.

That's the case at Artesa, where management also added a tip line to receipts. Still, tipping varies from none to $40, says a tasting-room associate: "The benefit for us is it lets us know we're on the right track."

St. Francis also recently added tips to its receipts for food service, like patio tasting with charcuterie plate. Even then, sometimes customers tip, sometimes they don't. Sometimes they even cross out the tip line.

The scene at Thumbprint is wine-lounge-chic. Flights for two run $25 to $35 and include local cheeses, honey, nuts and dried and fresh fruits—similar to St. Francis, but with no tip line. "It's certainly not something that we expect," says Thumbprint's Daniel Webber, "but of course, it's always appreciated."

At Westwood Winery's tasting salon, where seated tastings are intimate and time-involving, winemaker and part-owner John Kelly doesn't accept tips offered to him personally, but he leaves it up to his employees to decide for themselves how to respond. "One of my guys often gently declines on the grounds that he sees himself as an educator, not a server—and how often do you tip your teacher?"

So who's tipping at the tasting room? "Most of the time, it's industry people," says Erin Callahan at Red Car. Several others agree. Tasting room, restaurant and other hospitality folks understand. Plus, they're usually getting the tasting comped and 30 percent off the wine.

The only standard at tasting rooms, says Harvest Moon's Brad Schroeder, is that employees generally receive commission for signing up wine club members. Besides that, don't bet that they're getting a dime on bottle sales, and it's a safe bet that they're not taking home the $100 a day in tips that Schroeder says his roommate gets from the good patrons of Napa Valley's Silver Oak Cellars.

As for formalized tipping guidelines, it looks like we're not there yet, especially as winery staff can only agree among themselves that while tipping is nice, it's absolutely not expected.

That's odd, says Callahan, because it's almost the same thing as sitting down at a bar for a spell: "You're serving the alcohol, you're giving your time, you're creating a friendship." And with that, she returns to a couple of tourists at the bar, creates an entire day's itinerary along the Russian River for them, while pouring their next Pinot Noir and deftly describing its floral, bright cherry character.