Lopez family files federal lawsuit over slaying of their son 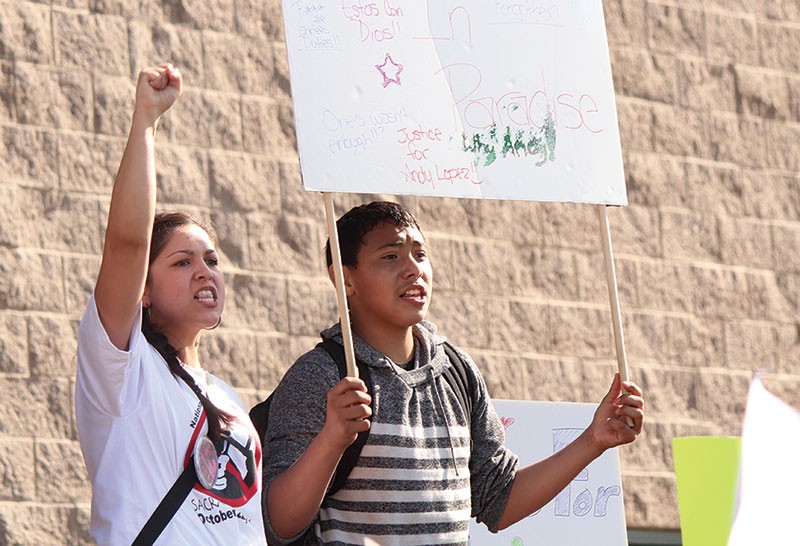 The family of 13-year-old Andy Lopez has filed a lawsuit in federal court over the fatal shooting of their son, claiming that Sonoma County Sheriff's deputy Erick Gelhaus has a history of reckless acts and "shot without provocation or cause."

At a Monday press conference in San Francisco, standing between the boy's parents Rodrigo and Sujey Lopez, attorney Arnoldo Casillas declared the Santa Rosa Police Department's investigation into the shooting would be "a whitewash" and promised a thorough investigation via the legal process.

On the afternoon of Oct. 22, Andy Lopez was shot and killed by Gelhaus, who says he believed the replica AK-47 rifle the boy was carrying at the time was real. According to Casillas, only three seconds elapsed between the moment one of the deputies called for the boy to drop the gun and the moment Gelhaus began firing.

Casillas spoke to reporters about the autopsy, which bears out witnesses' statements that Deputy Gelhaus continued to fire his gun after Lopez had fallen to the ground. A bullet that entered Lopez's right buttock, Casillas explained, traveled up into the boy's torso, proving that the shot was fired when Lopez was horizontal.

The attorney also detailed the initial shot that hit and felled Lopez, which entered his body above his right nipple and traveled toward his left shoulder. "It went through his heart. It killed him," Casillas said.

Such a trajectory would appear to show that Lopez had only turned halfway to face Gelhaus by the time the first fatal shot was fired—in essence, that Lopez had no chance to see who was calling to him before he was struck with bullets. Gelhaus has stated that he cannot remember if he identified himself as law enforcement when he called for Lopez to drop his gun.

The suit also alleges that Gelhaus has "engaged in a custom and practice of reckless and dangerous use of firearms and other misconduct." In 1996, Gelhaus and his partner were accused of falsifying police reports in a domestic violence matter, the suit says; the partner was fired, Gelhaus was not.

Last week, area resident Jeff Westbrook came forward to say that Gelhaus had pulled him over for a traffic violation and pointed his pistol at Westbrook twice—once when Westbrook offered to move his car to give Gelhaus more room on the road shoulder, and once when Westbrook lifted his shirt to show that he was carrying no weapons.

In December of 2012, Casillas won a $24 million jury verdict in Los Angeles after an LAPD officer shot and paralyzed a 13-year-old boy. Casillas stated Monday that the amount in Lopez's case could be even higher. But the involvement of the Lopez family in marches and vigils since their son's death hints that the results of subpoenaed information regarding the shooting and potential changes to the current protocol in Sonoma County are equal priorities.

Currently, investigations in officer-related shootings in Sonoma County call for the Santa Rosa Police Department to investigate the sheriff's department, and vice-versa. But because of the shared duties and close relationship between the two agencies—at this time, the Sonoma County Sheriff's Office is investigating the SRPD for an incident earlier this month—the ostensibly "outside" investigations contain a conflict of interest.

Investigations are then reviewed by the district attorney's office. In district attorney Jill Ravitch's case, more conflicts arise as she faces an election year. Sheriff Freitas, a key supporter, spoke at her campaign kickoff event at Kendall-Jackson winery in June. Additionally, the Santa Rosa Police Officers' Association has endorsed her campaign.

Meanwhile, a coalition of 11 groups has officially called for the U.S. Commission on Civil Rights to return to Sonoma County and examine officer-related shootings, 26 of which have been fatal since 2000, and none of which has resulted in finding any wrongdoing on the part of the officer. In 2000, the same commission recommended the creation of a civilian review board to review officer-related shootings in Sonoma County.

Until that happens, high-paid attorneys will have to ask the hard questions of Gelhaus.