My favorite plays of the year 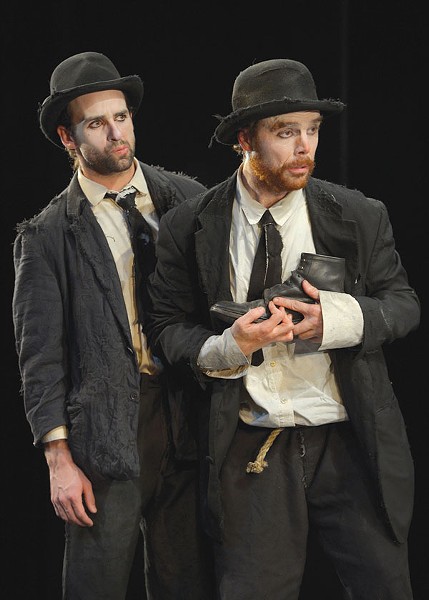 Of the 70-something plays I see each year, I am asked every December to select 10 that were my favorites. That's an interesting concept, favorites.

My favorite pet of all time was Waldo, a seriously flawed example of canine scrounginess, wholly unexceptional except for one detail: I loved him. I suspect he was no worthier than any other dog, and I'm sure that the experts who judge dog shows would scoff were I to suggest that Waldo deserved to be thought of as the best. But we love what we love.

Once a year, I set aside my analysis and simply name the 10 shows that got to me the most, made me laugh the hardest or cry the longest or think the juiciest thoughts. Some of these might truly belong on a list of the best shows of the year (some were awesome!), but that's another list. These are my own personal, most-loved shows.

1. 'Waiting for Godot' (Marin Theater Company) Director Jasson Minadakis took one of the theater's most minimalistic plays and stripped it down to almost nothing but the words, then put those words into the mouths of four brilliant actors. Gorgeously staged, it took audiences on a journey of absurdist extremes. Wonderfully done.

2. 'The Price' (Cinnabar Theater) A brilliant Charles Siebert almost stole Arthur Miller's well-crafted drama from his three co-stars, but under the poetic direction of Sheri Lee Miller, actors John Shillington, Madeleine Ashe and Samson Hood (in his best-ever performance) kept stealing it back.

3. 'The Sound of Music' (Mountain Play) The Bay Area's largest stage (atop Mt. Tamalpais) was put to spectacular use in Rodgers and Hammerstein's beloved classic, from cars and motorcycles driving across massive pivoting sets to the von Trapp family climbing an actual mountain in the rousing and lovely finale.

4. 'The Shape of Things' (Main Stage West) It was a strong year for Keith Baker, who rocked as Caliban in Sebastopol Shakespeare Festival's Tempest but had already given one of the year's best performances in David Lear's production of Neil LaBute's social satire about art, love and other forms of emotional manipulation.

9. 'Shrek: The Musical' and 'Pirates of Penzance' (Summer Repertory Theater) SRT's strongest season in years included two supremely charming shows which worked as a pair (so I'm including them as one). Shrek: The Musical, directed by James Newman, transported the nasty-nice animated film onto the stage with a sly social message about equality and speaking truth to power. Gilbert and Sullivan's Pirates of Penzance, directed by Brian J. Marcum, was played with giddy enthusiasm and lighthearted glee.

10. 'The Spanish Tragedy' (Marin Shakespeare Company) Thomas Kyd's seldom-produced play, as directed by Lesley Currier, was a wild ride of a show, alternately violent and funny, poetic and crude, a memorably rip-roaring history lesson that had audiences buzzing from start to finish.