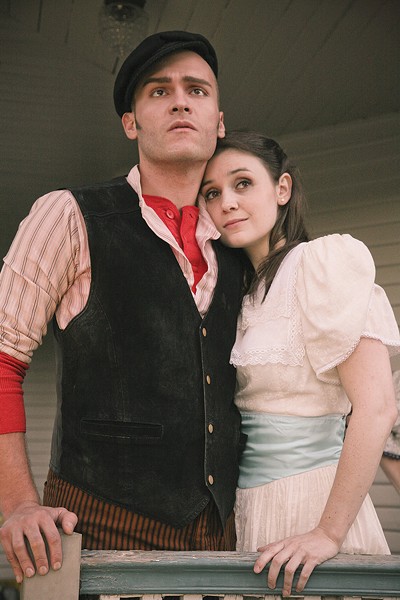 When Spreckels Performing Arts Center announced plans to present a "staged concert" of Rodgers and Hammerstein's 1945 musical Carousel, more than a few folks wondered what that actually meant.

How does a "concert-sized" musical compare to a "regular-sized" musical. Asked to explain what audiences can expect from the three-weekend run of the show, musical director Janis Wilson is quite clear.

"It's not a concert," she laughs. "It's a show! It's Carousel. It's very dynamic. People are moving around. There are costumes. There is gorgeous choreography. There are very good actors performing every line of the play and singing every word of the songs with fantastic voices. It's a bit stripped-down, but what makes the show wonderful is all there onstage."

Under the direction of John Shillington, the production's most concert-like element is that the orchestra has been moved from the pit to the stage, arranged on platforms of varying heights just upstage of the performers, the grand piano front and center.

"There are minimal sets, so no scene changes," Wilson says. "There is lighting on the actors, changing from scene to scene just like a normal stage musical. It's like a black box theater piece. It feels very intimate, very exciting."

While stripping away some of the more cumbersome elements of a fully staged musical—there is no actual carousel in this Carousel—Wilson says the production does put a bit of extra focus on the beauty and brilliance of Hammerstein's lush, dramatically intertwined music.

"The score is deceptive," she says. "I wasn't that familiar with Carousel at first. I knew a few of the better-known songs, but then I saw how the music is woven into the story, just flowing along with it and carrying it, like a raft on a river."

The songs—including "If I Loved You," "June Is Bustin' Out All Over" and the enduring "You'll Never Walk Alone"—tell the story of a carnival worker (Ezra Hernandez) whose numerous mistakes land him in purgatory, until he's allowed to return to earth for a day to make things right with his wife (Jennifer Mitchell) and child.

"I get drawn right into it," she says. "The story is very visually beautiful, it's very powerful. Unlike a lot of Rodgers and Hammerstein musicals, which are often about big, big themes—war and racism and hatred—this is about normal people, regular people, making mistakes and trying to correct them. It's beautiful."