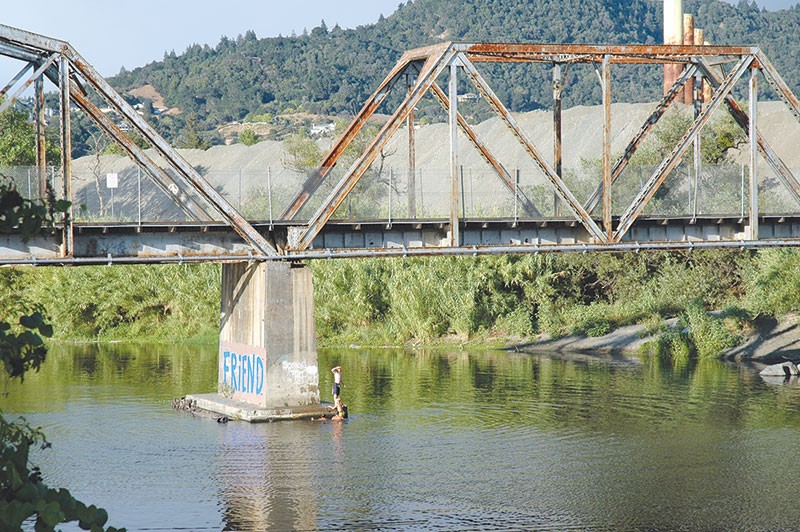 Sonoma County officials leapt into the fray late last summer when a surprise and lethal toxic blue-green algae bloom in the Russian River killed a golden retriever and freaked out river-splashing fun-seekers drawn to the cool water and numerous water-borne entertainments.

The blue-green menace is also called cyanobacteria, and it's pretty harmless for the most part. But, as county health officials explain, if the algae grows quickly—or "blooms"—it can create and release cyanotoxins that can cause neurological and gastrointestinal distress if consumed.

The blooms are an unusual occurrence in the Russian River, say county officials, so it's fair to say that Sonoma County was caught a little off guard last year—even as county health workers do regular sampling of "fresh and ocean water for fecal bacteria to protect the public" says Karen Holbrook, deputy health officer with Sonoma County, via email.

Sonoma County Health Services has gotten out in front of any looming bloom this year. The county issued an information sheet just in time for Memorial Day weekend, as it warned against another possible bloom of blue-green algae. Among other handy helpfuls on its website, the county has created an online portal through which concerned citizens can check the results of ongoing tests for bacteria in the water.

This move to provide real-time data to river-goers is reminiscent of state environmental and health officials' move in recent months to keep fishermen and consumers up to date on the status of another algae bloom that conspired to shut down the Dungeness crab fishing season for months.

That disastrous bloom and its toxic by-product, domoic acid, not only killed the Dungeness season, but Scientific American reports it is causing brain damage in California sea lions. The culprit was a large blob of warm water offshore that provided a breeding ground for the algae.

The freshwater Russian River algae bloom was largely a byproduct of a hot summer and drought conditions that are no longer prevailing, after a pretty steady El Niño–driven storm season filled reservoirs and flushed rivers and streams.

Last year, the county reported that the algae blooms can occur in areas of a body of water that are slow-moving or shallow, where the nitrogen load can erupt into a biomass known as a "harmful algal bloom" (HAB, in the vernacular). So far, the county hasn't spotted any blooms this year.

"We can't say for certain if harmful blue-green algae blooms will occur again, but we are prepared with our monitoring plan and outreach efforts in case a bloom does happen," Holbrook says.

To that end, the Environmental Health and Safety division of the Sonoma County Department of Health Services and the North Coast Regional Water Quality Control Board will be monitoring conditions along the Russian River through the summer as part of a pilot program. The state ramped up its outreach efforts in 2012 when there were outbreaks in the Eel River and in and around the San Francisco Bay area.

Local businesses along the river are also being called upon to keep an eye out for the bloom and contact county officials. They're also being asked to keep customers apprised of the algae situation. Holbrook says health officials can't pinpoint particular areas of the Russian River as being especially vulnerable to a bloom. "The river environment frequently changes," she says. "There are not known specific locations that are more prone to harmful algal blooms."

The blue-green algae bloom is one of several HABs that have been on the rise in recent years as effects of global warming manifest themselves. Lake Erie was the site of a huge outbreak of blue-green algae in 2012 that led to "dead sea" areas of that freshwater lake. Closer to home, county officials warned off people and especially their pets from dipping a toe, or a paw, into Spring Lake following a 2012 outbreak of cyanotoxin there.

Last year, as the algae bloom unfolded in the Russian River, the county considered the extreme step of closing beaches along the Russian River, but never did—the bloom was a late-summer occurrence and the crowds and the algae largely abated as the weather cooled and El Niño set in. The county jumped in with warnings and did tell people to leave the animals at home, however, after the lone dog died.

This year, Sonoma County has laid out some "healthy water habits" that build on last year's encounter with the HAB. The county has recommended that pet owners check with their vets if they're concerned about blue-green algae health effects.

"Currently, conditions do not support blue-green algae blooms, and there are no restrictions for recreational use along the river, including pets," says Holbrook. "Even if cyanotoxin is not present, visitors are encouraged to practice healthy water habits," she adds, which includes rinsing off all family members, "including pets."

Here's what the county is explicitly recommending:

• Do not drink river water. Do not cook or wash dishes with river water. Wash yourself and your family with clean water after river play.

• Consume fish only after removing guts and liver, and rinsing fillets in clean water

• Bring your life jacket, but leave the alcohol at home. The side effects of alcohol—impaired judgment, reduced balance, poor coordination—can be magnified by the boating environment.

As Memorial Day passed and temperatures in Sonoma County hit the 90 degree mark, there were no health advisories in place on the Russian River—but there are color-coded warning signs should the blue-green algae rear its ugly flagellum again. The county website (sonoma-county.org/health/services/freshwater.asp#russian-river) notes that "should conditions change to support the growth of blue-green algae blooms, information will be posted here along with any health precautions recommended by DHS. Information will be updated regularly."

In the meantime, Holbrook says the county is going by thresholds established by the state in recommendations and assessments it made in its 2016 California Cyanobacteria Harmful Algal Bloom Network Guidance advisory.

"If toxins are detected at a level above the thresholds" set by the state, Holbrook says, "then DHS will issue public notification and post signs at the beaches."

Until then, relax by the river.