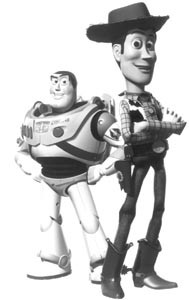 FEW FILM FANS will be surprised to hear that filmmaker John Lasseter--the mild-mannered creative genius behind the computer-animated hit film 'Toy Story'--is, and has always been, an enthusiastic devotee of toys. Yes, he's a toy fan: a defender, an advocate, a sympathizer, a fiercely passionate apologist for toys. He identifies with them, and he feels their pain.

"I love toys," crows Lasseter, speaking by phone from his car phone on his way home from Pixar studios in Pt. Richmond. "I'm just a big goofy kid at heart when it comes to toys."

A longtime resident of the town of Sonoma, Lasseter is joined in his semi-idolatrous fondness for plastic playthings by his five energetic sons. Between the six of them, Lasseter & Co. are a devoted toy-appreciation society, a certified toy-collecting force of nature.

Just one thing, though.

"The kids have their toys," Lasseter says. "And I have my toys."

Lasseter's personal stash--several floor-to-ceiling shelves worth--is nothing but a toy collector's dream, with vintage one-of-a-kind tin toys, Hot Wheels, G.I. Joes, and lots of Toy Story toys, the last gleaned from the 1995 Oscar-winning film and all residing in Lasseter's office at Pixar.

"The boys love to come to work and play with Daddy's toys," Lasseter says, laughing. "They're like bulls in a china shop. I just freak out."

It was his sons' rambunctious relationship with their dad's office toys--and his own growing ambivalence regarding his part in the enormous Toy Story collectible industry--that gave Lasseter the first germ of a plot for Toy Story 2, in which an eerie toy-collector kidnaps Woody, the tightly wound cowboy-doll and star of the first episode who, it turns out, is a valuable collectible. Woody's one-time nemesis Buzz Lightyear ends up leading a band of toys in rescuing their friend from becoming a permanent museum piece. Unfortunately, Woody--who always had a bit of an insecure streak in him--has grown to like being thought of as a valuable collectible.

"This time, it's Buzz who gets to say to Woody, 'You are a toy! You're not a collectible. You are a child's plaything!' " says Lasseter.

TOY STORY 2 holds the special distinction of being only the second animated Disney film to receive a big-screen sequel. (The first was 1977's The Rescuers, which was followed in 1990 by The Rescuers Down Under.) Follow-ups to such films as Pocahontas, Beauty and the Beast, The Lion King, and Aladdin have all been released directly to video.

"Once we'd come up with a story for the sequel," says Lasseter, "based on the strength of that story and the enthusiasm of Tom Hanks and Tim Allen [who have reprised their work as the voices of Woody and Buzz, respectively], all of us at Disney and Pixar decided that this was a film that belonged on the big screen."

In conceiving the sequel, Lasseter and his writers watched Godfather, Part 2 and The Empire Strikes Back, over and over.

"Those are two examples of movies that were not just good films unto themselves," Lasseter explains, "but sequels that actually made the first films seem better and stronger when you looked back on them."

According to Lasseter, that's just the case with Toy Story 2, which hits the big screen on Nov. 24. Hollywood insiders are now predicting that Lasseter's film will become one of the highest-grossing Thanksgiving week films of all time.

IT'S HARD to believe that just a few years ago, when word first got out that Disney was preparing a computer-animated feature, a number of industry critics suggested that Walt Disney--the hallowed progenitor of large-scale, hand-crafted animation--might be spinning in his grave.

"Are you kidding? Walt would have loved computer animation, from the moment he saw the first image of it," Lasseter says. "He'd have loved what this medium is capable of. Walt was an innovator, a man who pushed technology to its limits in finding better and better ways to tell a story.

"Because first and foremost, Walt Disney was a brilliant storyteller."

There's little doubt that he'd have loved Toy Story, arguably the most tightly plotted, well-structured animated film in the history of the Disney studio.

Besides, Uncle Walt loved toys too.

"In the first movie," says Lasseter, "we did a lot of thinking about how the world would look from a toy's point of view. So I have to laugh at the way I sometimes reacted when my sons wanted to play with my toys, telling myself, 'Hey John, didn't you learn anything from the first movie?' Toys were put on this earth to be played with. Just because some guy named Tom Hanks happens to have autographed my Woody doll doesn't mean the toy deserves to be locked away on a shelf.

"I mean, what kind of life is that for a toy, to never again be played with by a child?"

And that, says Lasseter, is what Toy Story 2 is all about.

"The most tragic thing," he says, "even worse than a toy being lost or stolen, is when a toy is outgrown by the child who once loved it. That's the kind of rich, emotional terrain that made us want to do this movie.

"Think about it. Being outgrown by a child. It's something that eventually happens to every single toy. It's a toy's version of mortality.

"A lot of people want to live forever," Lasseter concludes. "But a toy just wants to be loved forever."