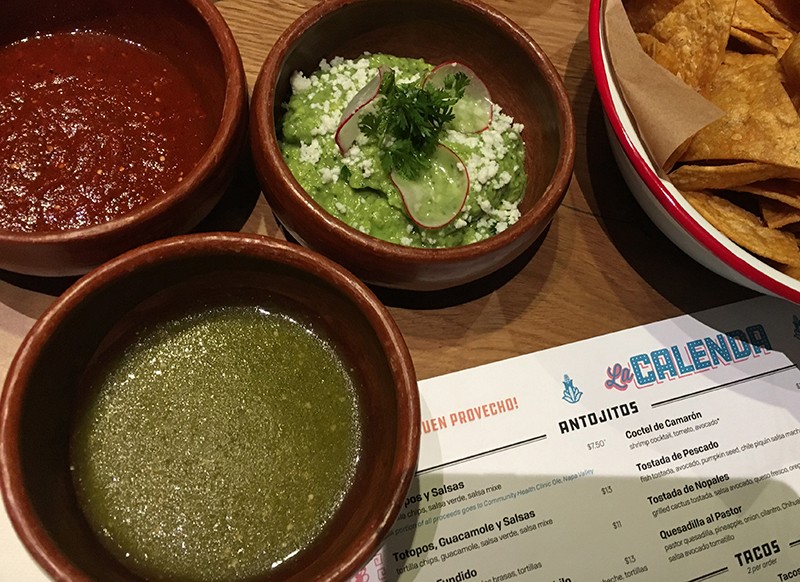 It wasn't an April Fool's prank when news leaked that the restaurant Hurley's would shutter after 16 successful years in business.

Well-known as one of the top restaurants in the heart of Napa Valley's multi-Michelin-starred city of Yountville, the top-tier ranking was no small achievement in a destination dotted with greats: the French Laundry, Bouchon, Ad Hoc, Bistro Jeanty, Bottega, and the latest opening of the crystal-covered palatial-designed RH, aka Restoration Hardware.

Eyebrows were raised at the subsequent announcement of a Mexican restaurant opening in Hurley's former space, and by the fact that it would be operated by celebrity chef Thomas Keller. Keller already operates three restaurants and a bakery within the 1.5 mile radius of Yountville. With the opening of Keller's fourth restaurant, La Calenda, the allure of this culinary utopia escalates yet another notch.

In a winter drizzle, I took my place under a portico crammed with a hopeful group whose goal was to score the first seating once doors opened at 5pm. Arrive later and you'll leave your name with the hostess and return in a while, instead of waiting outside. If diners opt to wait, there are tables inside at the bar or outside on a covered patio, where drinks aplenty are served.

Atypical of Keller's French cooking, La Calenda is a Oaxaca-inspired restaurant with a reasonably priced menu and a no-reservation system. It also has a sports bar with a playlist of club music (not this grownup's fave), the better to attract millennials.

My dining companion sipped on a specialty margarita while I sipped on a non-alcoholic version (in order to adhere to my self-imposed "dry" January detox program). We took our time with the menu and decided to share several small plates, beginning with the charred butternut squash tamale ($6), cooked in an avocado leaf and served with spicy black bean salsa. Our server entered our order on a handheld POS device.

Amazingly, in the midst of ordering our next plate, tacos de pollo pibil ($11), with sour orange and pickled onions on grilled chicken, our squash tamale arrived, steaming hot from the kitchen. That was fast! We continued to order amid the distraction of our hunger for the tamale, which tasted a bit bland until we scooped it on a tortilla chip.

My favorite dish was a duo of lightly fried red snapper tacos ($13) with chipotle mayonnaise and cabbage. I'd order this again on my next visit and skip the overly spicy enchiladas verde ($14) with Swiss chard. True to form, Keller reconstructs the enchilada with a green pepper sauce over a thin, blue-corn tortilla wrap with Swiss chard inside.

I might also return to order the chicken in stone-ground mole negro ($22) after requesting and receiving a sample taste of this unique Oaxacan specialty, with its velvety texture and chocolatey essence. According to one server, there are 25 ingredients that comprise this dark and savory sauce; another server swore it contained 30 ingredients. Divine, nonetheless.

Dessert is a must, so be sure to save room. The French Laundry's pastry chef makes the desserts for La Calenda, and priced at $9 each, you're getting a bargain. The silkiness of the flan put all previous versions to shame, and an order of petite churros transformed this fairground treat into an elegant wand to swipe a dollop of perfect consistency that attends the dulce de leche.

At the close of our Oaxacan culinary adventure, the server completed our transaction using that same mobile POS device to spit out the bill and swipe my credit card. I was elated to experience a Thomas Keller restaurant—and without breaking the bank.