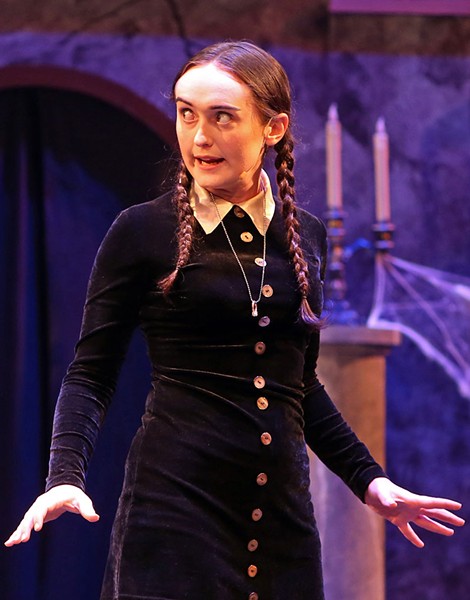 The Spreckels Theater Company's production of The Addams Family, running through Oct. 28, notes that the musical is "based on characters created by Charles Addams." It is not a recreation of the beloved 1960s sitcom or the 1990s films.

The Broadway musical by Marshall Brickman, Rick Elice and Andrew Lippa banks on the goodwill and fond memories of folks familiar with those versions but, under constraints imposed by the Addams Foundation, goes in a very different direction.

Uncle Fester (Erik Weiss) narrates the show and lets the audience know it's gonna be a love story. A teenage Wednesday Addams (Emma LeFever) is worried about bringing her "normal" boyfriend/fiancé Lucas (Cooper Bennett) and his straight-laced, Midwestern parents (Larry Williams, Morgan Harrington) home to meet her unconventional family. Wednesday lets her father Gomez (Peter Downey) in on her marriage plans but gets him to agree not to reveal her intentions to her mother, Morticia (Serena Elize Flores), until an announcement is made at dinner. Things don't go as planned.

It's a stock plot dressed up with the Addams characters, though they bear little resemblance to previous incarnations. Downey comes closest with a very nice paternal take on Gomez, while Flores' voluptuous Morticia lacks the character's dark, funereal tone.

The score is bouncy yet unmemorable, but there are a lot of good voices delivering it. Prepare to be knocked out when Pugsley (Mario Herrera) sings about the potential loss of a playmate sister with "What If."

Ignore the trick the show's creators play with The Addams Family characters and you'll enjoy a family-friendly Halloween treat.

In order for a show like Count Dracula—running in Monte Rio through Oct. 27—to work, it has to either be played straight or as camp. Playwright Ted Tiller's 1971 version of Bram Stoker's chiller under Nadja Masura's direction tries to do both, and the mix just doesn't work. Tiller also seems to have worked under the assumption that no one had ever heard vampire lore before and inserted reams of lengthy, dull exposition that makes the show run an hour longer than it should.

A good set, some nice effects and a game cast can't mask the undead weight of a leaden script. ★★