Triumph in the Sky

January 11, 2012
1 comment
Red Tails, a film about the Tuskegee Airmen produced by George Lucas, opens in theaters on Jan. 20.

He's already soft-spoken, but 86-year-old pilot James Goodwin speaks in a near whisper when he recalls World War II.

"It's sort of terrible talking about it," he says, detailing the perils of a battle fought in mid-air. As a Tuskegee Airman, Goodwin was tasked with protecting American bombers from German fighters. But unlike white "escorts" from other squadrons, the military's first group of black pilots was ordered to never leave its cargo and jet off in pursuit of a coveted enemy kill, a move that often protected the bombers but sometimes endangered both planes.

"You'd pick up a bomber that had been wounded by anti-aircraft and try to shepherd it home," he recalls. "But sometimes, because it had lost so much stability, it would lose control and wander back over the flak field. That was one of the most dangerous things for a fighter, because that field is deadly. You would see that, and it was horrible, these planes being knocked out of the air."

It's clear that Goodwin, now a pacifist, doesn't relish his violent memories. But the tall, thin veteran, who talks with his head bowed as though intently studying his own words, is not ashamed of his participation in the war. His Santa Rosa apartment is piled with hand-written notes and newspaper clippings about the Airmen, and when he forgets a name or a date, he walks slowly to a bookshelf stacked with the writings of former comrades.

The victories of Goodwin's elite fighter group disproved centuries of stereotype and led to Truman's 1948 order desegregating the military. Theirs is a triumphant narrative that has captured the imaginations of countless filmmakers, most recently George Lucas, whose Red Tails opens in theaters on Jan. 20. It's earned the fighters deserved renown and brought them, most recently, to President Obama's 2008 inauguration, where they were honored as civil rights pioneers.

But though the story of the Tuskegee Airmen is one of heroism, bravery and ultimate victory, it's also the tale of a deeply conflicted War Department that needed—and sometimes exploited—its black pilots while fighting viciously to keep them from the very work they were trained to do. Much of it is set in the clear skies of Italy, but it's really a story about the calculated brutality of 1940s America, particularly in that murky, humid place known as the South.

When Goodwin arrived in Alabama, the shadow of Southern racism still covered Tuskegee University. Aside from being Jim Crow territory, it was also the site of the infamous "Tuskegee syphilis experiment," in which the Public Health Department denied impoverished black sharecroppers treatment for their disease.

The Airmen, many of whom came from highly educated "Northern" families, were suddenly immersed in a culture of mundane, day-to-day prejudice.

"My father made me promise not to leave the base, so I never went wandering around," Goodwin, who grew up in Southern California, recalls. "We gave it pretty names, like Jim Crow, but it was actually domestic fascism," he adds. "You couldn't walk on the same side of the street."

Leslie Williams, a 92-year-old Airman now living in San Mateo, puts it in simpler terms: "Imagine the worst possible thing you can, and double it, triple it. That's what it was like down there."

Like Goodwin, Williams was raised on the West Coast. "I was playing a role down in the South," he recalls. "I played the role of a dumb 'boy' from California who said 'Yes, sir' and 'No, sir' just because I wanted to be a pilot so bad."

With other schools training black civilian pilots around the country, some Airmen questioned the military's motives in sending them to the heart of the bigoted South, according to Goodwin.

"[Tuskegee] had an airfield, and the flying weather was good," he says. "But the Army, not realizing that these men were highly educated Northerners, wanted to keep them in what they thought of as 'their own culture,' and keep them under control. You have to realize, it did not want to integrate them."

Prior to WWII, the Air Force refused to admit black pilots. It based this exclusion on a war college report from 1925 titled "The Use of Negro Manpower in War," which used social Darwinist logic to claim that blacks were physically, mentally and morally inferior to whites. It concluded that while they could succeed in menial labor positions, they would be unable to perform in highly technical roles, like flying.

Funds to train black pilots were allocated in the late '30s, but War Department leaders continued to be wary. At Tuskegee, rigid aviation and academic admissions standards were set and, once admitted to the program, Airmen were strictly segregated from their white counterparts.

When the program's first graduates were sent overseas, the department's paranoia turned to sabotage, according to Goodwin. The 99th Pursuit Squadron was sent to North Africa in April of 1943. There the group of expert pilots was given a ground-attack role and then critiqued for not engaging in air-to-air combat.

"The Army used that to argue that they weren't aggressive enough," says Goodwin, whose squadron joined the 99th in 1944.

"They were literally called cowards, because they had no kills to their credit," says Richardson. "But they weren't given the opportunity to do what they were trained to do."

Ironically, many of the pilots who were kept from meeting their potential in North Africa would be forced to outperform white aviators later in the war.

The late Gwynne Pierson, another Airman, flew 73 missions, according to his Mill Valley–based son Kerry Pierson. White pilots usually flew a maximum of 50 missions before returning to the States, but according to Pierson, the military believed that, due to what it deemed "flawed neural responses," black pilots could withstand more stress. According to Richardson, it wasn't uncommon for black pilots to fly more than a hundred missions before returning home.

On one such mission, Pierson was flying low over the Adriatic Sea when he spotted a German destroyer, his son recalls. He was low on fuel and couldn't navigate around the colossal ship, so he and his fellow pilots did the only thing they could.

"They more or less closed their eyes and started shooting," Pierson says.

One shot hit the ship's magazine. The destroyer exploded. Red Tails shows the planes speeding away from a backdrop of flames and smoke.

"He was wearing a leather jacket, and he said his jacket was soaked," Pierson says, recalling his father's stress level afterward. "It was like he had dropped it in a bathtub and let it sit there for four hours." 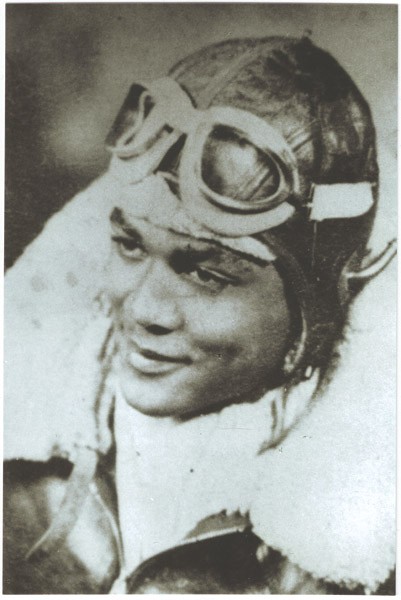 The 99th faced U.S. scrutiny until the end of 1943. That fall, the group's famous commander Benjamin O. Davis Jr. returned to the States to advocate for his squadron when Air Force officials recommended it be sent home.

Everything changed in January. On a notoriously balmy Mediterranean day, the Allies swarmed a 15-mile stretch of rocky beach near Anzio, Italy, and in the battle that followed, the Tuskegee Airmen shot down 12 German planes in two days.

"These incredible statistics went back to the States about the Airmen," Goodwin says. "That 1925 war report went out the window."

The 99th was legendary by the time Goodwin's newly graduated squadron joined them in 1944. But though he was elated to be fighting alongside them, the 99th struggled with his group's presence, he recalls. In May, the senior squadron was relocated from its mixed-race (though still strictly segregated) fighter group to the all-black 332 group, composed of four Tuskegee-trained squadrons.

"They weren't happy about being re-segregated," he says, "but thank God they were, because they taught us how to do the work we needed to do. It's kind of a mixed story, because these men had accomplished the goal of integration, and they didn't want to join an all-black group but they didn't hold on to those feelings. Finally, there was some mentorship, and no one had given them any mentorship in the beginning. That's one of the reasons the Army could ding them and say they weren't very good."

Without losing many bombers, the group destroyed and damaged upwards of 400 enemy aircraft, becoming known as the "red-tail angels."

In his apartment, Goodwin sorts through newspaper clippings like he's sifting memories, weighing them for fact and importance. He pauses to pull anecdotes and sidebars from each ink-smeared clip, but his impressive history spirals over a central conflict.

The celebrated veteran is now a Quaker. His mother belonged to the faith, which advocates nonviolence, and two of his brothers were conscientious objectors while he fought in World War II.

"I think I need to write something about all this," he says toward the end of our interview. "But part of the problem I've had is that I've never been able to square myself with it in a way. I will not apologize for my war experience, and yet I've moved on. I've come back to a very different place, and it isn't easy. I mean, my God, I'm 86 years old. At least it isn't pressing on me. I've been dealing with it for so long."

The younger Pierson says he's seen many Airmen, including his father, engage in intense contemplation as they age.

"They're a justifiably proud and remarkably humble group of men, but I see them beginning to look at themselves differently. There's a lot of bitterness, but I'm not saying they live their lives as bitter men . . . I don't know how to describe it. My father used to tell me about how, in training, the bar was set so much higher for them. The littlest things were watched out for and they were imposed with extra duties and called names."

Despite his mixed feelings on war, the rigid segregation he saw in the South and the restrictions he faced in the army, Goodwin seems to have escaped bitterness. His quiet voice is filled with intense conviction when he speaks about his post-war work in the Peace Corps and with War on Poverty, and his belief that, despite everything he's witnessed, reconciliation is a human possibility.

"Peace isn't the end, it's the way," he says. "It's a way to live your life and deal with others. It has to be almost like getting a new DNA. We keep wondering why people go to war, like it's this natural instinct that we can't biologically shed, but I think we can. I really do."