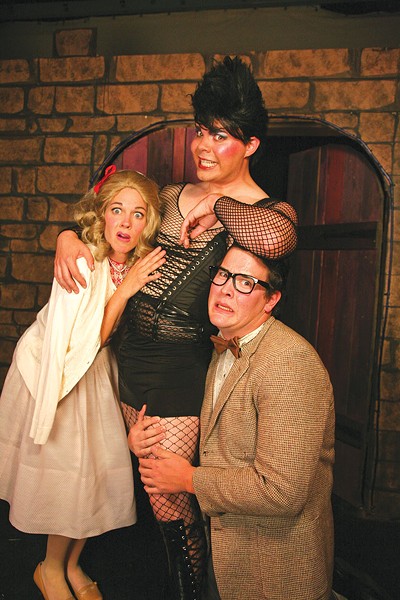 'Call outs." That's how fans of The Rocky Horror Picture Show refer to the lines the audience shouts up at the screen during midnight showings of the perversely enduring 1975 spoof. At Sixth Street Playhouse, where director Craig Miller has staged a spirited production of the original 1973 stage musical (on which the movie was based), "call outs" from the audience are not only tolerated, they are encouraged.

On the Sixth Street website, there's even a link to the "official" call-and-response script. And though the traditional use of water guns and the tossing of rice, cards and toast is not allowed in the Studio Theater (too dangerous for the actors), the cast is prepared to hear experienced Rocky followers shouting "Asshole!" and "Slut!" whenever stiff Brad (Braedyn Youngberg) and virginal Janet (Julianne Lorenzen) are named, and to cry "Say it!" when the sexually omnivorous Dr. Frank N. Furter (Rob Broadhurst)—to whose castle the wide-eyed newlyweds are lured—pauses with "antici . . . pation!" in the middle of a word.

Such frat-party behavior might normally get one ejected from a theater. Here, such actions will win applause and admiration, and fans who show up in costume (also encouraged) might even win a prize at intermission.

As with the film, which was crucified by critics but was embraced by fans anyway, it seems a bit beside the point to even attempt a traditional review of Sixth Street's Rocky Horror Picture Show.

The story is thin, the characters thinner, the logic of the "plot" is spotty at best, and what passes for a climax seems tossed together and disappointingly anti-climactic. But the songs by Richard O'Brien, who also wrote the script, still rock with silly, limit-pushing exuberance; the three-quarter-thrust staging in the studio works quite well in bringing the audience close to the action; the cast tackles the show with a fresh sense of can-you-believe-we're-actually-doing-this exhibitionism; and Miller's direction emphasizes the joyful deviance of the whole undertaking.

Cast highlights include Broadhurst and Lorenzen (both dazzlingly bold), a strong-voiced Shannon Rider as Magenta and Jake Turner as a peppy Riff Raff.

The only real way to judge this Rocky Horror is by the contagiousness of the actors' freedom-savoring fun, and despite some opening-night reserve in spots, it's here in great supply.