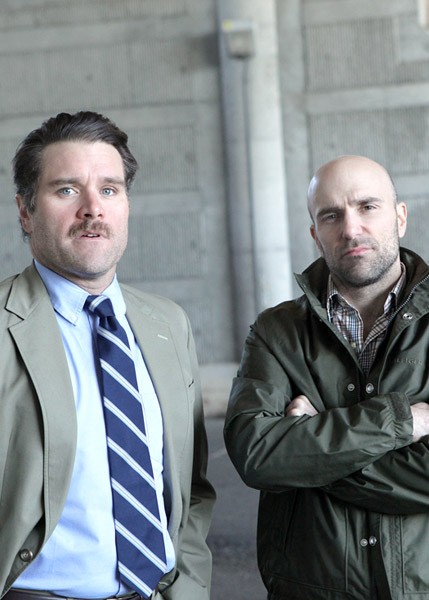 They are told by not one, but two disgraced Chicago cops, each extolling his own version of the gritty events that changed their lives and shook their friendship forever. Nominated for a Tony award in 2009, Rain is a remarkably well-crafted exercise in tandem storytelling, requiring pitch-perfect performances by its two actors.

In the stylish new production at Marin Theatre Company, director Meredith McDonough stages the action on a spare stage, with little more than a pair of chairs and two low-hanging interrogation lamps. That's all that's needed, because the story the actors tell is a whopper, loosely based on a legendary incident of bad decision making on the part of two stressed-out police officers.

Denny (Khris Lewin), a thinly disguised racist known for shaking down the drug dealers and prostitutes on his inner city beat, is clearly in trouble. Though his side of the tale begins with the innocuous announcement that his household has been chosen to be a Nielsen family, it takes little time for the story to turn ugly. Denny takes turns with Joey (Kevin Rolston) to describe the drive-by shooting that shattered Denny's front window and critically injured his infant son.

As the two decidedly different police officers (can you say "good cop, bad cop"?) prowl, hover and skulk across the off-kilter slab of a set, the intensity gradually builds. Each of these guys has done bad things, including one or two of them to each other, and each man is an expert at revealing enough of his own flaws to make him seem credible.

But credibility isn't the same thing as honesty.

Because of the many layers of fabrication put in place by Huff (one of the writer-producers of Mad Men), each one tucked between juicy slices of probable truth, the primary pleasure in watching this 85-minute "dualogue" is trying to determine which one is which. In classic noir stories, circumstances always put our hero smack in the middle of a gradually tightening circle. In the entertainingly lurid A Steady Rain, we get two such "heroes," each bringing to vivid life the age-old adage that you can't believe everything you hear—even when you happen to be the one saying it.