Corks pop out where angels fear to tread 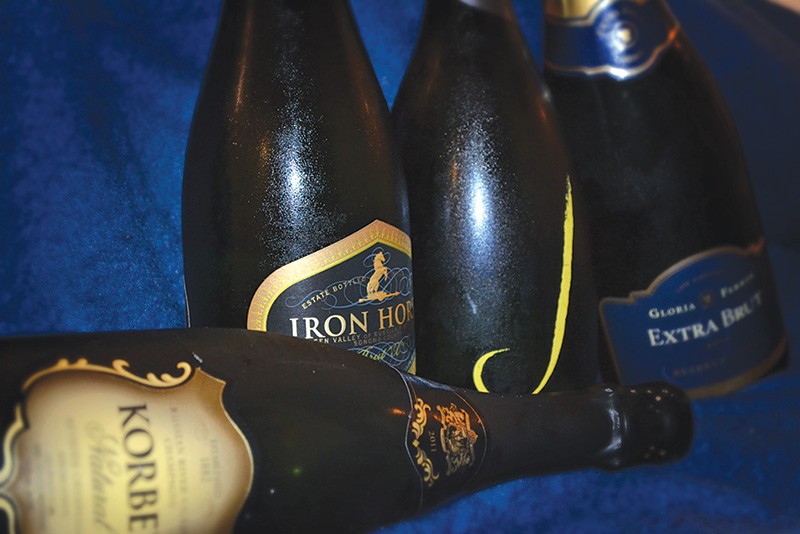 This year, we're going "ultra brut." Also called "extra brut" and "brut nature," this is a style of sparkling wine with a whiff of the fresh breeze to the moniker. Virtually unadorned by sugary ornament, it stands alone in its natural state, proudly facing the winds of consumer trends.

Most sparkling wine has a syrupy slug (the dosage) added to it after disgorgement, when the dead yeast is removed from the bottle. In the brut style, it barely balances the acidity—less than 12 grams of sugar per liter. An ultra brut (less than six grams, or 0.6 percent) can only be produced under special conditions. Scott Anderson, associate winemaker with J Vineyards, explains that they first began work on J's Cuvée XB in 2012. It was a blend of the 2011 vintage with a portion of reserve wines stored in the winery's big, oak barrels. "We found we had a wine that had a nice mouthfeel," says Anderson, "and that's what you really need for one of these—a dry sparkling wine with some oomph behind it, without needing extra dosage sugar."

Anderson says that they tabled the experiment for a year before coming back to it in 2013. "It's the same wine—we just left it for an extra year on the yeast and—lo and behold—it worked out really well."

For this year's sparkling wine holiday edition of Swirl, I put the ultra brut challenge to Bohemian staff, fully anticipating that they might reject these carefully made wines in a blind tasting, because they're too stripped-down for most palates. But it turns out that the ultra brut is not to be underestimated. Wines are listed in order of the panels' overall preference; stars awarded from one to five by me—adjustments by no more than one-half point after retasting.

J Vineyards Cuvée XB, Russian River Valley ($45) This wine has just the faintest, hoary hint of vintage Champagne, that aroma of autolyzed yeast that's warm and toasty and old and musty at the same time. Imagine that a Scottie dog shortbread cookie wakes up in a tangle of sheets in between a crimini mushroom and a sourdough starter, and says, "Whoa, what in heck did I drink last night?" A blend of 50 percent Chardonnay and 49 percent Pinot Noir, my debauched little friend, with a dash of Pinot Meunier to spice things up. A platinum blonde tinted slightly pink, the XB greets the palate with cake and raspberry frosting but leaves it with Sweet Tarts, lemons and limes. So teasingly rich, yet lean and snappy, this sparkling wine makes me crazy, and I'm glad that the Bohemians agree with me. Contains just 0.5 percent residual sugar. ★★★★½

Roederer Estate Brut, Anderson Valley ($23.99) The only non–ultra brut that I guessed as an ultra brut, the Roederer is tart and intense, with nectarine notes and the savor of freshly pressed Pinot Noir and Chardonnay grapes. Some said it was sweet; some, tangy. Some said it had a split personality. Good stuff. 1.2 percent. ★★★★

Domaine Carneros 2009 Estate Brut, Carneros ($32) Pear tart crust and lemon bars; sharp attack; lingering cider on the finish. By the by, Domaine C. has a tasting room-only 2010 Extra Brut ($39) that we discovered too late for this tasting. 0.9 percent. ★★★

Korbel Natural Brut, Russian River Valley ($15.99) Based on the 2011 vintage, "Natty K" may smell odd but it's a party in the mouth. What is it with the pine sap aroma and this wine, every year? But it's also reminiscent of smoked apple cider, and the bubbles won me over with their voluminous, cotton-candy sensation. 0.75 percent. ★★★½

Gloria Ferrer 2005 Extra Brut, Carneros ($45) This ranked highly with most tasters—for me, it's a serious threat to the J XB. The Gloria has a warmer, more buttery aroma, like a Pepperidge Farm Chessmen cookie that went to bed early with chamomile tea, waking up refreshed and virtuous on New Year's Day. Super acidic, like white grapefruit at Christmas breakfast, but the contrast with the scones and cream feels so right. 0.74 percent. ★★★★½

Iron Horse 2010 Brut X, Green Valley of the Russian River Valley ($50) This is a fine extra brut, a pale rose-straw-tinted sipper with the lightest of strawberry cake aromas, red apple skin, and tangy, Sweet Tart sensations. But at this searingly low dosage, it may be too raw and extreme—you might say exciting—for some palates. Call the Oyster Girls! 0.2 percent. ★★★★