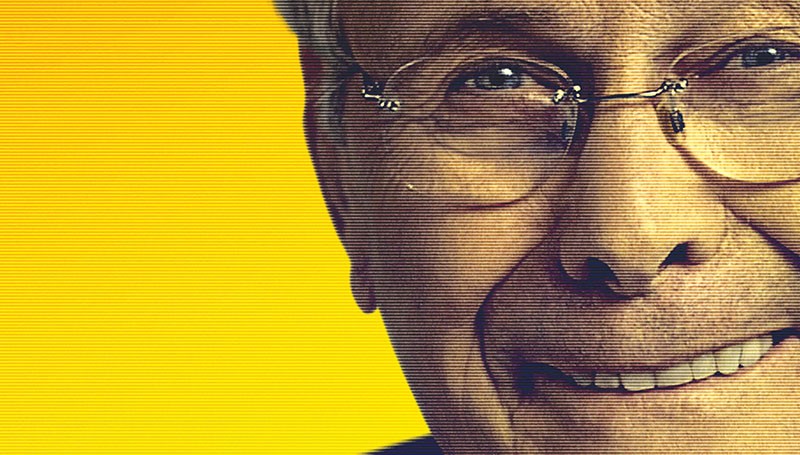 In head-and-shoulders close-up, Donald Rumsfeld shares some anecdotes from his life as a public servant—first as a Congressman, later as a special envoy and finally, and ruinously, as Secretary of Defense in the George W. Bush administration.

In Errol Morris' Known Unknown, you get the answer to how Rummy sleeps at night, not that the question is asked in so many words. Rumsfeld was right, and when he wasn't right, it was because the definition of the phrase "he was wrong" is too restrictive. Besides, no one could have foreseen what was over the hill. So again he was right.

If necessary, Rumsfeld can cast a passive sentence so that the "he" in it vanishes utterly. A wasted moment in the film occurs during the revisitation of Rumsfeld's meeting with Saddam in 1983, when he's seen greeting the dictator with a smile and a handshake. Asked about the incident, Rumsfeld shifts the ground without opposition from his questioner. Morris loses the chance to prompt Rumsfeld back from his memories as Man of Diplomacy to the matter of the consequences of encouraging Saddam.

Known Unknown is a minor and sometimes agonizing film, not just because of the eel-like subject or because we endured the Rumsfeld Show for years. There are tedious stylistic quirks Morris recycles from previous efforts, such as the time-lapsed sun, rising and falling, as cars zizz by on the Koyaanisqatsi Expressway and as Danny Elfman pays tribute to Philip Glass.

In the end, it seems there's too much that's been put off-limits here. We're never treated to what it was like for this political animal to be locked out of power. Instead, we get Rumsfeld shedding a few grateful tears at our luck as a nation. Our nation will not survive much more of Rumsfeld's kind of luck. Rather than telling it to the camera, Rumsfeld should be telling it to a judge.