'Taming of the Shrew' runs Saturday–Sunday, and Labor Day, through Sept. 13 at the Old Mill Park Amphitheater in Mill Valley. All shows 2pm. Free. www.curtaintheatre.org 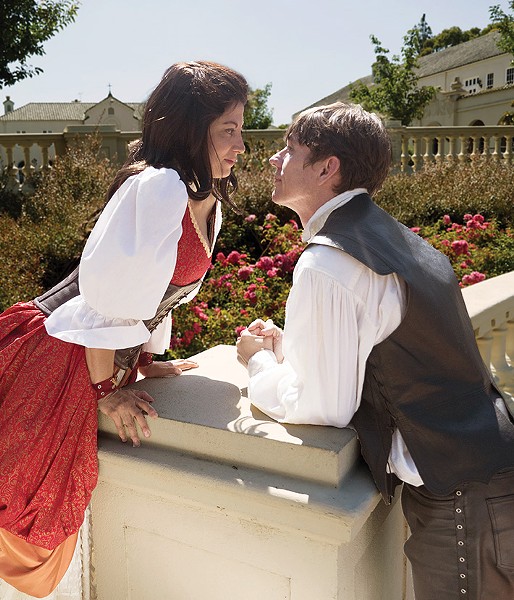 You don't need to have seen Shakespeare's Taming of the Shrew to know what it's about. More than 400 years after Shakespeare invented them, Kate and Petruchio, the feisty and ferocious fiancée and her would-be "tamer," are among the most famous characters in dramatic literature.

In Curtain Theatre's rollicking new outdoor production—free to the public and running weekends in the Old Mill Park in Mill Valley—these characters leap to vivid life, reminding audiences exactly why this story continues to endure after four centuries.

There are plenty of fresh ideas, uniformly strong performances, a boatload of surprises and a few moments of true genius. The fluid direction by Carl Jordan results in a buoyant, bouncy fluffball of a play and a thoroughly delightful staging of Shakespeare's complex comedy about a battle of wits between a woman who will suffer no fools and the foolish man who finally wins her heart.

The setting and costumes in Jordan's version are fairly traditional, with a live band playing Renaissance tunes before the show, but the director lets us know early on that he will be taking a playful tone with the material, beginning with an original pop-rock tune that serves as a prologue. In this production, people tend to burst into song, tossing out snippets of popular rock songs, a few lovely originals by music director Don Clark and one hilariously heartbreaking rendition of "99 Bottles of Beer."

Kate (a splendidly three-dimensional Melissa Claire) makes her initial appearance wielding a chainsaw (!), stalking across the stage while belting out the lyrics to George Thorogood's "Bad to the Bone." Petruchio (Alan Coyne, excellent) is played as a goofy sweetheart with a giddy knack for improvisation and questionable taste in codpieces.

The marvelous ensemble is too large to give proper credit to all, but notable standouts include a brilliant Heather Cherry as Petruchio's frazzled servant, Grumio; Tom Reilly as Kate's gracefully befuddled father, Baptista; Juliana Lustenader as Kate's shallow-but-winsome sister, Bianca; Steve Beecroft as the crafty servant Tranio; and an amiably silly Seth Dahlgren as Hortensio, a wildly persistent suitor to Bianca.

And did I mention the show is free?

After 16 years, Curtain Theatre is still managing to exist solely on the donations audiences happily drop in the basket at the end of the show. And trust me—this one is well worth paying to see.