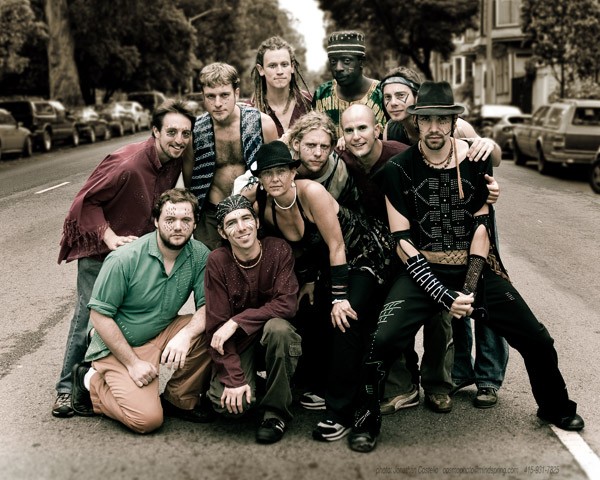 Upholding the musical revolution of Nigerian-born Fela Kuti and his philosophy that art should have political meaning, East Bay Afrobeat ensemble Albino! continue to upstage themselves with songs rife with social commentary and political dissidence.

New arrangements like "Deepwater Horizon," about the Gulf Coast oil spill, offer up a dose of lucid insinuation that governments and mainstream media are intentionally deflecting the world's key social and environmental issues.

"There was so much publicity around Deepwater but so little around the damage Exxon creates, specifically in Nigeria. These companies get away with it at our cost. We allow these companies to exist and work. 'When will we learn, when will they learn?'" relays frontman Michael Bello on the song's lyrics.

Equally vexed by the neverending drive for capitalist decadence in our society, Albino! are resolved to spreading the warning of unsustainable consumerism.

Their new undertaking is a partnership with the Story of Stuff Project, a Berkeley nonprofit. The organization creates animated educational videos describing what really happens during the many phases of material consumption. If you ever thought buying "Made in China" began at the local Wal-Mart, these videos are for you.

The Afrobeat buzz is in full upswing, with the Broadway production Fela! currently touring the West Coast. Although appearing on the heels of a decade-old Afrobeat renaissance led by Brooklyn musical architects Antibalas, the show extends the genre's sound and significance to people across generations.

Concentrated in the 1970s at the apex of Fela Kuti's incendiary career, the musical highlights the major events that led to his fame as an icon for revolutionary Africa. "Fela! is making Americans more aware of this music, and what an incredible life and mission he had," says guitarist Cal Reichenbach.

Like African music in general, Afrobeat's high-energy sound connects people through song and dance. The instrumentation is a complex pattern of jazz, funk and improv backed by alternating drums and percussion—a jigsaw puzzle of interacting rhythms, vocals and choreography that creates a hypervibrant stage show.

Without a doubt, Albino! live up to the definition. Voted one of the best live bands in the Bay Area, the group's eccentricity is reminiscent of a spaced-out trance on the Playa at Burning Man. Appropriately, they love playing Sebastopol time and time again because, according Reichenbach, "We have a nice Burner following."