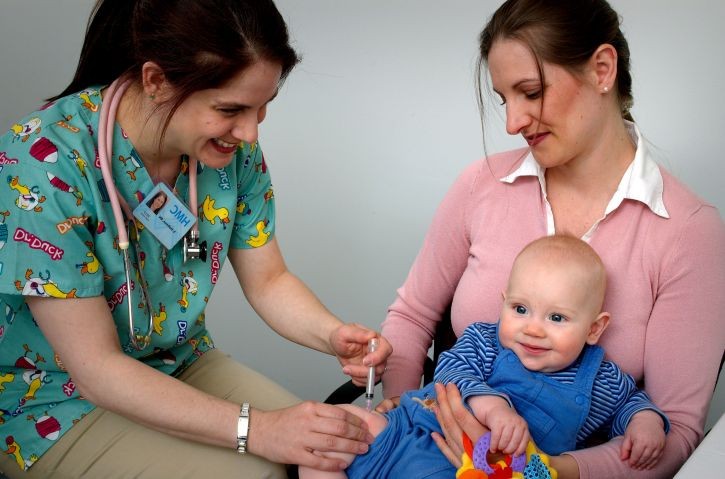 As an outbreak of measles courses through California, Sonoma County Health Officer Celeste Philip issued a warning and recommendation yesterday that parents immunize their school-age children against the highly contagious disease.

“I . . . write this letter to emphasize to parents and guardians the seriousness of this current measles outbreak and the potential impact to unvaccinated or under vaccinated children,” says Philip in a note distributed to schools and parents yesterday.

As of this week there have been 44 reported cases of measles in California and 750 nationwide, the highest number of cases, reports Philip, “since measles was nearly eliminated in 2000.”

In 2017, the state moved to rein in abuses over a “personal belief exemption” in the state vaccination law and Philip notes that since then, there’s been a 94 percent rate of compliance with state law that requires vaccination as a condition of attending public school. But there are strong pockets of anti-vaxxer resistance, including in Sonoma County, where the immunization rate in some schools is less than half, she says.

None of the measles cases this year originated in Sonoma County, “but we are vulnerable,” she writes, given that “in some (Sonoma) County schools less than half of students are up to date with the recommended vaccination schedule.”

Any measles outbreak in Sonoma County will be met with swift action in the schools, Philip warns. “If your child is unvaccinated or cannot provide laboratory confirmation of measles immunity and there is a case in their school, they will likely be excluded from attending school for 21 days after their last exposure to the contagious individual. This exclusion helps protect the susceptible students and limits further spread of disease.”

Online data indicates that Sonoma County is one of the least-compliant counties in the state when it comes to parents getting their children vaccinated. The state requires that children entering kindergarten be immunized against 10 communicable diseases, including for measles, mumps and rubella. Those three are covered under the so-called “MMR” vaccine, which Philip says “has a long-established history of being safe and effective.” That view is not generally shared by the anti-vaxx community.

Here's how the immunization debate and changes in state law have played out in one Sonoma County school over the past few years: the Sebastopol Independent Charter elementary school had 45 students enrolled in 2017-18. That year, 35.5 percent of students were up to date in vaccinations; up from 26.67 percent the year previous. Fifty-eight percent of the exemptions in 2017-18 were for medical reasons, up from 25 percent the year before. Thirty-eight percent of students were exempted in 2016-17 because of personal beliefs against vaccination held by the parents.

Those numbers are at stark odds with recent polling around vaccinations. A Pew Research study from 2015 found widespread acceptance of vaccinations, as 68 percent of adults said childhood vaccinations should be required. Thirty percent said the choice ought to be the parents to make—and many of those respondents were young adults aged 18-29 who have no experience with, for example, the devastating effects of polio (which has largely been eradicated thanks to the Salk vaccine).

Philip’s warning comes as the California legislature is considering closing a new loophole in the state’s childhood immunization law that came about after it ended the personal belief exemption in 2017. That moved followed a measles outbreak that year, as reported by KRCR ABC7 and elsewhere.

In closing one loophole, the state opened another: Now California’s vaccination law permits medical exemptions for parents of children whose health might be impacted negatively by vaccinations. The exemptions are currently granted by the family's health-care provider. Critics say the loophole has been abused by parents who oppose vaccinating their kids, whether it’s for medical or personal reasons.

A state senate bill this year would close the loophole in a bill sponsored by Richard Pan, who is both a senator and a pediatrician. He’s been making the media rounds this month promoting SB 276, which would put the final decision about medical exemptions in the hand of the California Department of Public Health—and create a state registry of all children who have been granted medical exemptions.

As that bill works its way through committee, Sonoma County’s health official Philip is urging that “unvaccinated or under-vaccinated children should be vaccinated as soon as possible through their healthcare provider so they will have protection, will not further spread illness and will not need to be absent from school.”

One of the most persistent critiques of vaccinations is that they cause or can contribute to autism. The autism-immunization debate continues apace, and one of its biggest proponents is Robert F. Kennedy Jr., founder of the organization Children’s Health Defense (CHD).

Kennedy has compared a purported vaccine-driven rise in autism rates to the Holocaust, and noted in an interview that ran on the CHD site that “life for these children is an endless agonizing progression of twilight and terror. The tormenting gut aches, excruciating sensory sensitivities, the serial head banging and screaming, the isolation and perpetual joylessness. The entire family is permanently devastated.”

State Sen. Pan, in turn, has been stressing his pro-vaxx viewpoint on behalf of public school children with severe health problems and/or auto-immune disorders—who can often only attend public school if everyone is also vaccinated, given the health risks they'd face if one of their peers came down with the measles.