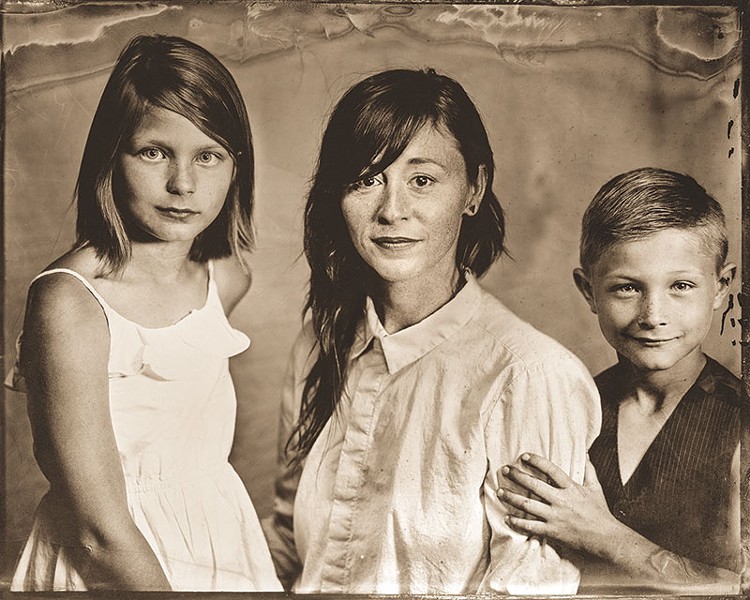 It's hard to believe, in the era of Instagram and iPhones, but photographs actually used to be made of film.

Even crazier, way back in the early days of photography, in the 1850s, the images were made on metal, created through a technique known as "collodion wet-plate process" or, more simply, tintype.

One hundred and fifty years later, not many people have ever heard of tintype, yet in Santa Rosa, the process lives on in a modern way. And this year, it's gone mobile.

"I've realized that you get the fundamentals from school, but you also learn a lot going into a shop," says Flynn.

Flynn has long had a particular fascination with the old tintype photos, allured by the complicated chemical process and striking image. "I always like the look of the final product. Tintypes record UV light, so there's something slightly surreal, slightly radiant to them. They have a kind of luminescence."

Tintype, in fact, never utilized tin. Back in the 1800s, when the process was used to capture images of Civil War soldiers and portraits of Abraham Lincoln, it was done on iron. Nowadays, it's aluminum, backed with black velvet. Emulsifying chemicals are applied wet on a rigid metal plate that's then loaded into a large-format camera and exposed. The positive image appears directly on the aluminum.

About two years ago, Flynn perfected the process and started taking tintypes at events around the North Bay. "It's definitely reignited my interest and passion in photography across the board," he says.

Last year, Flynn was at the former Maker Media location in Sebastopol when he saw the company's old-school fire truck.

"It was obvious that it was something weird," says Flynn. The vehicle, really more of a van, was a mobile workshop for Maker Media. The boxy, red, German fire truck, made by Mercedes-Benz in the 1970s, had seating for nine and a large cab in the back, where Flynn envisioned a mobile tintype studio.

Flynn talked with Maker Media, and procured the vehicle. After six weeks of late-night modifications, he had created a photography studio where he can shoot and process his tintypes.

Since going mobile, Flynn has been a crowd-pleasing figure at South A Street arts events and elsewhere.