Imagine that five years from now when a light switch is flipped on in a Santa Rosa home, the electricity comes straight from solar panels mounted on the roof of a nearby school; and when it's too cloudy to generate solar juice, turbines roar at the geothermal plants near Geyserville; and when demand for wattage is highest, a power plant near the airport that runs on methane extracted from chicken poop kicks in; and during the winter's storms, wave-generated electricity streams across lines from Bodega—all low-carbon, with not a watt of nuclear power in sight.

Now imagine not only an ecologically sensitive and economically robust alternative to business as usual, but add this kicker: all of it could be owned and democratically controlled by Sonoma County's residents and local investors, and built by local workers.

On March 22, the Sonoma County Board of Supervisors may have set in motion just such a future by tasking the water agency to study the feasibility of developing a Community Choice Aggregation program. It marks the beginning of what could be a dramatically positive transformation of Sonoma County's entire economy, but the path forward is highly complex and full of potential pitfalls.

Local, clean energy is an obtainable goal thanks to a little-known piece of legislation, Assembly Bill 117, passed in 2002, which enables local governments to establish Community Choice Aggregation programs (CCA or "Community Choice"). "I like to call it Community Choice Energy," says Woody Hastings of the Climate Protection Campaign, a local nonprofit involved in shaping energy policy. "It's less jargony than 'Aggregation,' and captures what it's really about: locally developed clean energy."

The only precedent in California to what Sonoma County seeks exists in Marin County. And while dozens of other communities across the state have explored the possibility of creating their own CCA, and some have even taken steps to set one up, only San Francisco leads Sonoma County as of today.

"We're in the very beginning stages," says Cordel Stillman, capital projects manager for the Sonoma County Water Agency. Stillman's team is heading the feasibility study partly because the water agency is a utility in its own right, with several megawatts of solar and hydropower already online. "The purpose is to see if CCA is financially viable. It's strictly a numbers game. If it pencils out and we go with a CCA, then developing local sources will become a focus."

Parallel to Stillman's feasibility study is another water agency-led effort to explore potential renewable energy resources from Petaluma to Cloverdale. Called Renewable Energy for Secure Communities, or RESCO, the mission of the state energy commission, in its own words, is "to advance the implementation of a locally owned, cost-effective renewable portfolio." Already on the shelf is another blueprint for the development of local renewable energy, the Climate Action Plan, developed by the Climate Protection Campaign. Built into these studies, and the ethos of the officials and activists driving them, is the notion that renewable, low-carbon projects, located within the county, should be a core component from the very beginning.

In this respect, Sonoma County's reasons for pursuing a CCA are somewhat different from previous efforts. For example, in Ohio and Massachusetts, where two successful CCAs were founded in the early 2000s, green energy and localization were overshadowed by the primary drive to reduce ratepayer bills.

Just a year old, the Marin Energy Authority is the first operational CCA in California. It took a gargantuan effort. "When we got close to launch, PG&E did an anti-marketing campaign," recalls Jamie Tuckey, spokesperson for the Marin Energy Authority (MEA). "They were sending out direct mailers to everyone in Marin. It was a fear-based campaign where they were spreading rumors that households would go into debt by $5,000 if they joined our agency, saying that the lights would go out, that we weren't actually going to be supplying clean energy." After PG&E failed to scuttle the MEA, the utility attempted to prevent other communities from following Marin's lead by sponsoring Proposition 16, a ballot initiative that would have established virtually insurmountable obstacles to establishing CCAs. 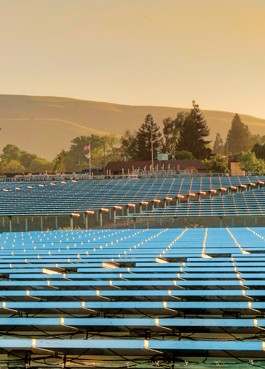 But all is not as green as it may seem in Marin. Since overcoming PG&E's efforts to kill it, the MEA has been subjected to an altogether different kind of scrutiny that reveals just how difficult the task of localizing and greening the energy supply really is, even with the right policy in place. In a recent editorial in SolarTimes, Marin County resident and publisher Sandy LeonVest wrote:

"While MEA took credit in its promotional material and in the local media for 'breaking away' from PG&E, it ended up signing a contract with an even bigger and more formidable corporation: Shell Energy North America, a subsidiary of Royal Dutch Shell. And MEA customers, as it turned out, would still be reliant on PG&E to deliver their energy. . . . While it's arguably true, at least on paper, that the energy mix from MEA is clean, SolarTimes' research shows that, at best, it is only marginally cleaner. And the authority has yet to implement plans for building any locally generated energy."

Like the MEA, San Francisco's CCA, CleanPower SF, which is nearly operational, has also been in negotiations with Shell as a possible supplier. Yet Shell's environmental and human rights abuses are infamous. Shell seems content to profit from Marin's wealthy consumers who will pay premiums for "deep green" electricity, all the while continuing to drill for oil in the Gulf of Mexico and increasing use of the controversial method of "fracking" to release natural gas deposits by pumping toxic chemicals into the earth.

The MEA's Tuckey counters such criticisms by noting that while Shell supplies the energy, the electrons are still being generated from less carbon-intensive sources. "We actually have the highest percentage of renewable energy resources reported to the Public Utilities Commission of any utility in the state." Tuckey also notes that the MEA's contract with Shell was always considered a first step for a small agency with big goals but a limited in-house capacity (MEA has a staff of five); the ultimate goal is still to develop local resources and suppliers.

These seem distant targets at their current pace. The MEA is expanding its energy supplies with an Atlanta-based corporation (hardly local) to develop methane-gas-fired energy from landfills. According to MEA documents, these two facilities will be located at landfills in Yuba and Solano counties, thus any harm to the environment—and any jobs created—would occur outside Marin.

So too for the 40-megawatt solar farms MEA is currently negotiating to build. Charles Schultz, development director of Local Power, the Bay Areabased brain trust widely credited with creating CCA and other green and local policies, vented his frustration at a recent Marin Clean Energy board meeting, asking, "What happened to localization?" and suggesting that the MEA had lost sight of the original goals of locally sourced green electricity.

Can Sonoma County do it differently? Certainly there is much in the MEA's model to be emulated (as CleanPower SF has done), but if the goal of providing clean energy and green jobs through local resources is to be met, then Sonoma County's CCA will have to be different.

The RESCO study of county renewable resources is a major reason why Sonoma County might overcome some of the limits and contradictions Marin and San Francisco are running up against. Some local renewable energy projects are already under development and would flourish with a CCA.

For example, the chicken-poop power plant is real; county leaders have already secured $55 million in bonds to build the 1.4-megawatt facility near the airport. And the Sonoma County Water Agency is already extracting energy from biomass. Using wastewater at the Laguna Treatment Plant, staff grow algae which is then converted into methane. The methane powers a generator that provides electricity for vehicles and other uses, and the waste product is premium compost that goes on top of strawberry beds. Then there's the geothermal resource of the geysers, which already produce 725 megawatts, with room to expand. Sonoma County is the Saudia Arabia of geothermal energy.

Yet another reason for hope is the sheer momentum and cooperation among activists and officials keen on establishing CCAs that both provide clean energy and boost local economies. Marin Energy Authority's staff has already been tapped by Sonoma County's planners for their knowledge, as have many other key agencies, nonprofits and companies. It's possible that a larger Sonoma County CCA, or perhaps a joint Sonoma-Marin effort, armed with the RESCO renewables study, a larger ratepayer base and a restrained PG&E could immediately make real on the promise of clean, local energy.

And what about PG&E? Both MEA and CleanPower SF staffers report continuing problems. PG&E's CEO recently told the Press Democrat that his company would not interfere in Sonoma County's efforts to establish a CCA. A PG&E spokesperson contacted for this article offered vague statements to the effect that the company would still be vigilant to ensure its customers "receive accurate information so they can make informed decisions about where they get their power."

The Coalition of California Utility Employees, an industry-friendly union lobby that often serves as a proxy for PG&E in its political battles, is pushing legislation in the State Senate that would severely hamper newly formed CCAs. This bill, SB 976 would prohibit consultants advising CCAs from bidding on CCA contracts, a stricture that would surely eliminate most of the qualified contractors in a field where experience is in short supply.

Countering this is SB 790, sponsored by State Sen. Mark Leno. The bill reads: "California has a substantial governmental interest in ensuring that conduct by electrical corporations does not threaten the consideration, development and implementation of Community Choice Aggregation programs," and it establishes a "code of conduct" and "enforcement procedures" to ensure utilities desist in interfering with Community Choice.

"I think CCA is going to happen," predicts Anne Hancock, executive director of the Climate Protection Campaign. But legislative battles, policy studies, public input, corporate flack—all of it will shape the final form. Hancock and other consumer and environmental advocates are therefore already deeply engaged in working with elected officials and the private sector and educating the public about CCAs' potentials and pitfalls.

Woody Hastings brims with optimism when he thinks about how a CCA could unfold in Sonoma County. "The most ambitious scenario would be if we could hit the ground running with a program that embraces the local build-out of renewables, integrated with the procurement of power on the open market." This, he explains, would allow for a rapid transition away from large, centralized and nonlocal CO2-emitting power plants through the development of many local, distributed, renewable energy projects. And because it would require a complete retooling of the county's energy grid, it would drastically stimulate the economy. "This is the enormous green jobs program," concludes Hastings.