The Bohemian's recommendations on state propositions 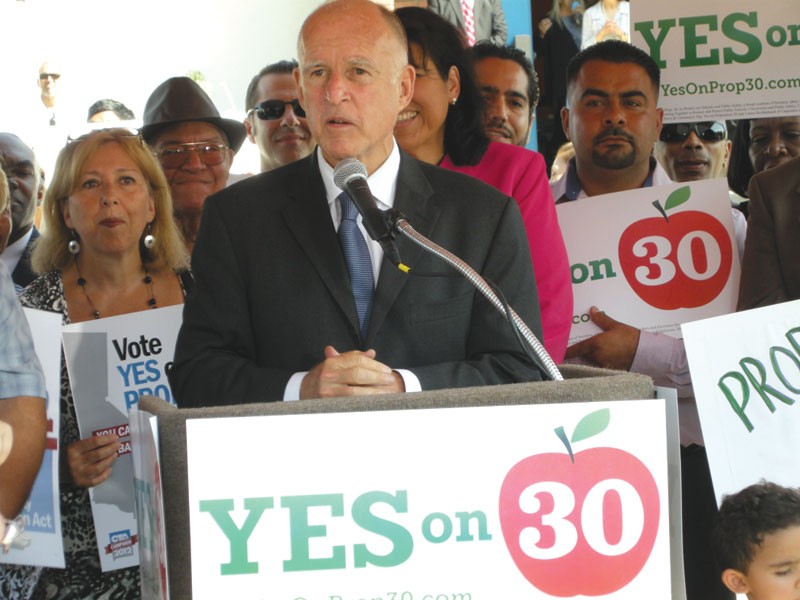 Propositions 30 and 38 both raise income taxes, diverting funds where they are sorely needed: schools. But they can't both go into effect—each contains a section stating that only the proposition receiving more votes can become law. So which to vote for? That's the tricky part.

In addition to a quarter-cent California sales tax increase, Proposition 30 taxes only high-income earners, starting with those who make over $250,000 a year. Proposition 38, on the other hand, taxes everyone making over $7,316 annually using a progressive scale from 0.4 percent on the lowest end to 2.2 percent for top earners.

If you think the top 1 percent should do its share, Proposition 30 has an edge. But Proposition 38 outlines exactly how those dollars would be spent in clearer and more convincing detail than Proposition 30. Supported primarily by Southern California civil rights attorney Molly Munger, Proposition 38 earmarks 60 percent of revenue to K-12 schools with 30 percent going to repay state debt and 10 percent going to early childhood education programs for four years. It tallies up funds on a per-pupil basis and requires local audits.

Spearheaded by Jerry Brown, Proposition 30 designates the creation of a special account for an unspecified majority of the amount in the general fund with the rest helping to balance California's overall budget during its seven-year lifespan. The money would then go to schools and community colleges for any educational purpose the institutions deem necessary.

While Proposition 38 seems like a better piece of legislation, Brown, playing the role of the no-nonsense dad in the financially broken home of California, will make good on threatened "trigger cuts" of more than $5 billion from California's already strapped education system if Proposition 30 doesn't pass. Although Proposition 38 is expected to raise roughly $10 million over its 12-year lifespan, if passed, the trigger cuts would still take effect. Voting for the little-known activist's measure at the expense of the highly publicized Proposition 30 isn't wise, and, with California's ranking of 47th in the nation in per-pupil spending, voting no on both isn't either. In this complex political morass, Proposition 30 emerges as the best choice.

At more than 8,000 words, Proposition 31 attempts to refashion the way the state budgets in a complicated and potentially unilateral fashion. The ballot measure takes the budget cycle from one to two years and sets up the possibility that the minority party (i.e., Republicans) could hold the state hostage on passing revenue measures that require a 2/3 majority vote. This action would then hand over control to the governor to make budget cuts as he or she sees fit.

Also in Proposition 31, there is the confusing Community Strategic Action Plan, which would allow counties, cities and school districts to break away from the state and allot money as they see fit, rather than take direction from the state. Local control of funding is always enticing, but this option means more bickering, stagnation and disruption to services as locals duke it out for dollars. And while some counties are in relatively good financial standing, other counties in the state could design their own demise with poor decisions. The best part of the ballot measure is that it would force legislators to make bills public three days before taking a vote. That could be done without such a cumbersome package of new laws.

Proposition 32 sounds attractive, with its supporters' resounding slogan of "Stop Special Interest Money Now!" The measure is dressed in bipartisan garb, stating that it will ban both corporate and labor contributions to political candidates. But Proposition 32 is primarily backed by the smear-ad-happy American Future Fund, a Republican group registered as a 501c(4), meaning that it can receive unlimited contributions and doesn't have to disclose its donors. And Proposition 32 does nothing to regulate Super PACs or other independent expenditure committees like the American Future Fund, so the political moneymakers that most need reform are completely (intentionally?) overlooked.

There's no question that the ties between politicians and special-interest money from across the political spectrum need to be loosened, and Proposition 32 would stop the ethically shady practice of taking automatic deductions from employee paychecks, but a proposition that cripples campaign donations without touching independent expenditure loopholes will only encourage more nameless, reckless spending.

When California voters shot down Proposition 17 in 2010, they sent a message to Mercury Insurance CEO George Joseph that his deceptive initiative was bogus. Voters shouldn't get fooled again, as Joseph has returned with the same slightly altered proposal. The idea is to allow auto insurance companies the ability to offer "discounts" to drivers who can prove they've purchased car insurance continuously for five years. If that smells fishy, it's because it is, and Joseph has spent more than $8 million of his own money to deodorize it. Instead of discounting rates, Proposition 33 "will allow insurance companies to increase cost of insurance," according to the attorney general. The California Department of Insurance has said that the initiative "will result in a surcharge" for many drivers, and it penalizes responsible drivers who, for whatever reason, had no need for auto insurance in the past—people who bike to work, become injured and cannot drive, or live in cities with dependable public transportation. If Mercury Insurance's terrible reputation doesn't sink this initiative, the intelligence of the voters should.