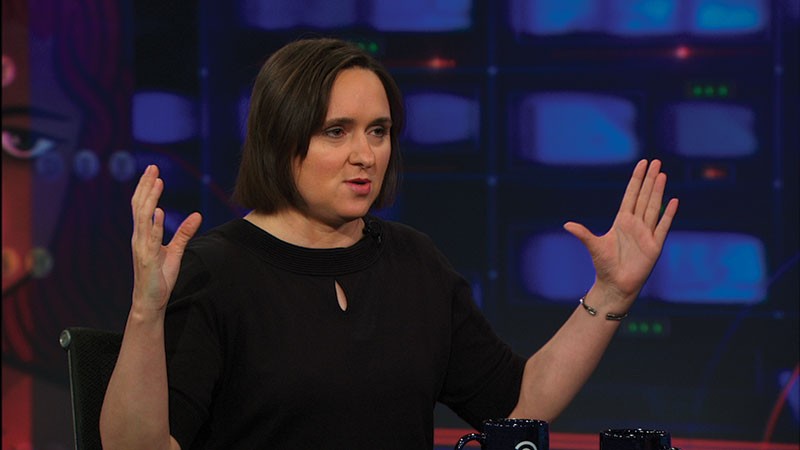 'I love paper," says Sarah Vowell, lingering on the word "love" just a tad longer than most people would find comfortable. Her emphasis suggests a connection that extends beyond mere appreciation or respect, and strays into something akin to a deeply emotional relationship.

"It's true. It's a relationship. Books are my first love," she affirms. "Books are where I found refuge as a kid. I love books. So I love paper."

First rising to fame as the teller of astonishing true stories on National Public Radio's This American Life, Vowell now regularly reads aloud from her bestsellers like The Wordy Shipmates or Lafayette in the Somewhat United States. Her distinctly recognizable voice has even been heard as Violet, the invisible girl, in Disney-Pixar's The Incredibles.

This weekend, Vowell will be headlining the inaugural Wine Country Spoken Word Fest, taking the stage on Saturday night at the Mystic Theater, to regale fans with her off-the-cuff Mensa-nerd verbalism and dry observations about the state of the world. Her appearance is part of an all-star evening that includes West Virginia storyteller Bil Lepp and Los Angeles actor-poet Steven Connell.

Asked what exactly she'll be talking about, Vowell says she's not entirely sure. She imagines she will read from one or more of her books, will probably discuss something happening in the news and will basically wing the rest.

"It's very improvisational, what I do," she says. "I always think I know what I'm going to talk about, but then I tend to edit and change as I go. I'll probably read from one of my books. I do tend to do that. I read, and then I interrupt myself. Then I fight valiantly against my own interruptions. And then I read some more. And then I take questions. I love taking questions. That's the most spontaneous part of what I do. Basically, I really never know what's going to happen."

As a writer who's appeared all over the country, Vowell has learned that different parts of the U.S. respond differently to what she says. For example, on the West Coast, audiences tend to hiss and boo when she mentions the name of some contemporary figure they find repellent. Once she got over her initial assumption that West Coast audiences were hissing at her, she's now come to appreciate the hissing, to a degree.

"It's a good problem to have, the freedom to hiss public figures whom you oppose," says Vowell. "It's a very accessible and low-tech form of social expression, hissing is. Though it's a bit less articulate than the type of discourse that usually gets me excited.

Vowell allows that talking about history onstage requires a balance of historical accuracy and humor. Her public appearances tend to be a lot funnier than her books.

"Because sometimes I do need to be entertaining," she says, adding, "In my books, though, I reserve the right to be a drag."

Which brings us back to the subject of paper.

"It's appropriate somehow," she says, "to communicate about history on actual paper, which, let's face it, is going to be history sooner or later."

E-readers are replacing books, she points out. Many people prefer to get their news online than in an actual newspaper. Asked if there is a way to save print, and papers and magazines for the future, Vowell grow silent.

"Oh, I'm sure there is," she finally says. "I hope there is. But if it has anything do with the internet, I'm not sure I approve. I'm an old-fashioned person who still believes in things like the letter to the editor. I believe in well-written news stories and solid reporting and news bureaus all over the world. I don't even think newspaper photos need to be in color.

"From where I stand," says Vowell, "color photos are a little too newfangled for me."