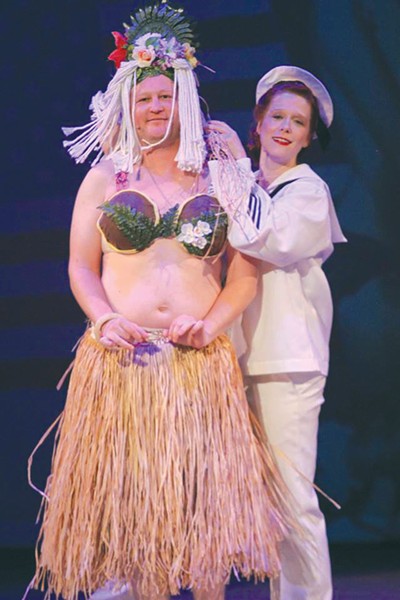 World War II didn't seem like ancient history in 1949 when South Pacific made its Broadway premiere. Sadly, its warnings of the damage bigotry and prejudice can do aren't ancient history now as it plays at the Spreckels Performing Arts Center.

Based on James Michener's Pulitzer Prize–winning Tales of the South Pacific, Rodgers and Hammerstein, with Joshua Logan, took a couple of the stories, softened some of the characters and created an immensely popular musical tale of wartime love.

The play is set on two islands in the South Pacific during the war and centers on a pair of love stories. Navy nurse Nellie Forbush (Heather Buck) finds herself falling in love with French expatriate plantation owner Emile de Becque (William O'Neill). M. de Becque has a mysterious past, which doesn't seem to bother Nellie too much. Well, at least not as much as the fact that he has biracial children born of a youthful relationship with a Polynesian girl.

Meanwhile, newly arrived Lt. Joe Cable (James Raasch) flips head over heels (in what seems like record time, even for a Broadway musical) for local girl Liat (Maya Babow). Liat's mother, Bloody Mary (Elsa Fulton), is anxious to marry her off. Joe, however, just can't imagine bringing her back to his Philadelphia family. Nellie and Joe end their relationships. Emile and Joe head off on a dangerous military mission, but will love be the ultimate casualty?

Classic songs like "There Is Nothing Like a Dame," "I'm Gonna Wash That Man Right Outa My Hair," the enchanting "Bali Ha'i" and the beautiful "Some Enchanted Evening" fill out the story, with the daring-for-1949 "You've Got to Be Carefully Taught" driving home the source of people's prejudices.

Musical director Nancy Hayashibara and her 11-piece orchestra deliver the lush score, and Buck and O'Neill are in excellent voice and character with O'Neill's operatic training put to good use here. Nice comedic support comes from William Thompson as Seabee entrepreneur Luther Billis and Jeff Coté as harried Captain Brackett. Elsa Fulton steals every scene in which Bloody Mary appears. Directors Jim Coleman and Sheri Lee Miller keep things moving at a good pace throughout the two-hour, 45-minute running time, but there are some flat spots.

Don't dive too deeply in the waters and you'll find yourself enjoying the music and appreciating the message of South Pacific.