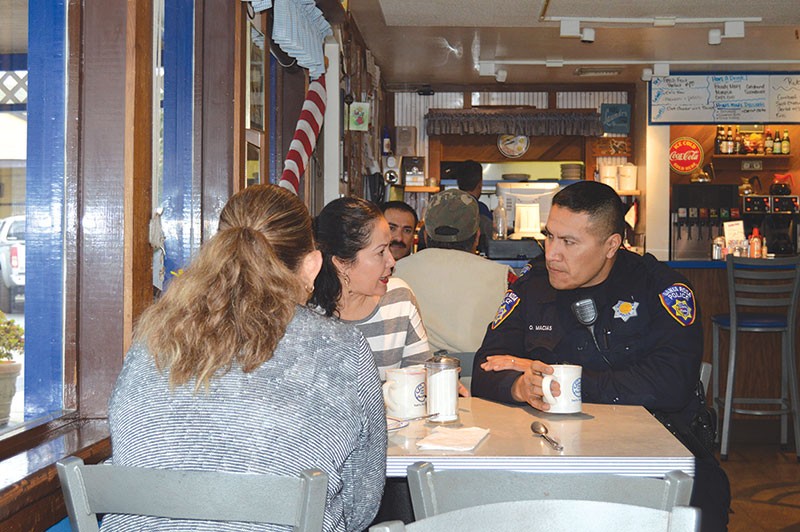 Sgt. Jeneane Kucker greets a steady flow of police officers coming in and out the door of Sam's For Play Cafe on a cool and cloudy Thursday morning in unincorporated Roseland.

It's the sixth "Coffee with a Cop" event hosted by the Santa Rosa Police Department, and the place is bustling with chatter: property owners are in discussion with an officer at the counter, a volunteer officer stands at the ready with pamphlets, and uniforms engage with citizens at the tables over bottomless cups. There's a lot to talk about.

Coffee with a Cop is a program started in 2011 by the Hawthorne, Calif., police force that has quickly grown into an informal best practice for law enforcement organizations that have been under especially intense scrutiny recently through high-profile, viral-video encounters with the public. Close to home, there is the lingering shadow of the 2013 death of Andy Lopez in nearby Moorland, and the anticipated annexation of Roseland into the city limits by 2017—and what that means for the local police force.

Kucker runs the Coffee with a Cop program in Santa Rosa, and says it's a multifunction opportunity for officers to field complaints and engage with the public engagement in a calm, if hypercaffeinated, environment. The program aims to build trust and community partnerships and fight a pernicious "They're all bad apples" anti-police bias fueled in part by explosive viral videos.

These events "help with the perception of the police and break up the stereotype," says Kucker. "This humanizes the badge," lets the public know that cops are parents, regular people too—"Hey I have a life outside this uniform and badge."

In five events, she says, the response to Coffee with a Cop is that "overwhelmingly . . . everybody has this craving for the communication, the relationship," Kucker says. "The hard part is still the job. We drive around in cars that we consider to be our offices, responding to emotionally charged situations. Here, we're not responding to an emergency; we're here to lower the barriers. This program is becoming part of our culture—it has become part of our culture at this point."

Santa Rosa Police Chief Robert Schreeder is at a table with Capt. Craig Schwartz, and says the coffees are a piece of community policing that addresses the difficulty in getting "officers to talk to people when they're not in crisis, one on one." The biggest challenge with a program like Coffee with a Cop, he says, is police culture itself, and changing it with the necessary buy-in from the officers.

It's not uncommon for officers to resist change, Schreeder says, and what better way to reform the culture than in a "comfortable, positive environment," such as a diner. His officers, he says, get "10 to 12 calls for service a day, a crisis, a problem, people always in need. You want to meet them in a low-stress way."

He expects all police trainees to attend the coffees.