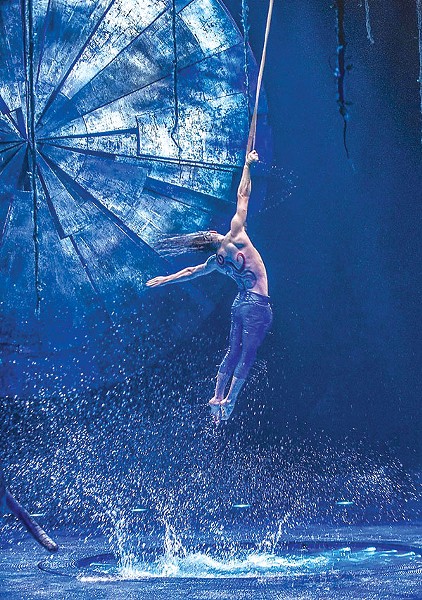 Describing a new Cirque du Soleil show is always a challenge. The acclaimed company's newest production, Luzia: A Waking Dream of Mexico, is no less difficult.

Presented through Jan. 29 under the company's conspicuously festive big-top tent in the parking lot of San Francisco's AT&T Park, Luzia, directed by Daniele Finzi Pasca, is a rain-drenched love letter to the colorful culture of Mexico. The acclaimed clown Eric Fool Koller is our guide, as he tries against odds to get . . . well, we're never quite sure where he's going till the end.

First seen falling from an airplane, dangling downward past birds and clouds as he descends from the towering heights of the tent, Koller is a marvel, his resourceful but none-too-lucky character finally improvising a safe landing (using an umbrella) after first losing his parachute. Throughout the show, this plucky wanderer stumbles in and out of various mind-boggling landscapes and experiences. Early on he encounters a stunning monarch butterfly with enormous puppeteer-powered wings, running and flying alongside a remarkable mechanical horse that's sprinting in slow motion on a series of treadmills.

Then come the acrobatic hummingbirds, impossibly bouncing their way through a series of ever rising hoops; a Tarzan-like acrobat dancing in and out of a pool of blue water, as a friendly jaguar prowls and frolics on the periphery; a Mexican wrestler achieving every child's dream of defying gravity on a massive swing that, in one heart-stopping moment, takes its rider all the way around.

As stunning as these visions are, nothing prepares us for the wall of rain that regularly falls on the stage, drenching its performers, yet somehow instantly disappearing beneath the marvelous, absorbent set. In one jaw-dropping moment, the sheet of rain becomes the show itself, at first dividing itself into two, then falling in patterns to the left and then the right, and finally transforming into a magical canvas, dropping the rain in patterns of fish and birds and butterflies.

Knowing it was done through a computer-timed release of water never detracts from the utter amazement of the effect. In sync to the beat of pulsing, soul-reaching music, the magnificent rain sequence was easily one of the most beautiful things I have ever seen onstage.

As theater, Luzia sometimes strains for a dreamy linear arc, but ultimately this stunning show reaches past dreams and beyond logic to create a world you might not want to leave. And one you might just want to experience again.