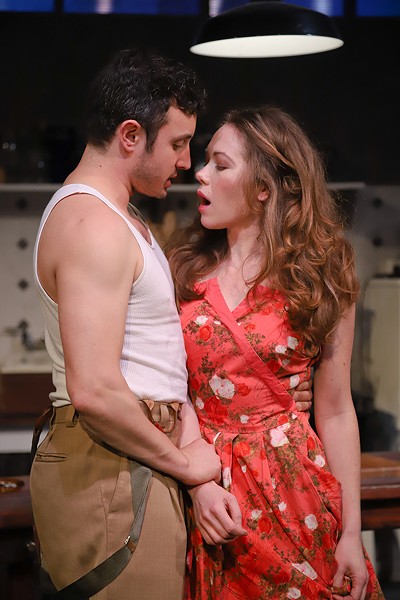 Sometimes the most interesting dramas are the simplest: a single set, a few characters, a conflict. "Naturalistic" plays, as they are sometimes called, were the result of a movement in late-19th-century European theater to enhance the realism of plays with an understanding of how heredity and environment influence an individual.

The most famous play of the period is Swedish playwright August Strindberg's Miss Julie. Set in the downstairs kitchen of an estate, it's a three-character piece examining issues of sex and class. The title character is a count's daughter with an eye for her father's valet, complicated by the presence of the manor cook who happens to be the valet's wife-to-be.

Playwright Patrick Marber adapted the play for British television in 1995 under the title After Miss Julie, and a stage version premiered in 2003. It's running now through March 3 at Sebastopol's Main Stage West.

Marber moved the time and setting of the play to post-WWII England, specifically to the night of the Labour Party's landslide victory over Winston Churchill's Conservative Party. The significant upheaval to Great Britain's political and social system is reflected in the characters.

Miss Julie (Ilana Niernberger) is "to the manor born," but that doesn't stop her from slumming with the servants. John (Sam Coughlin) is the lord of the manor's valet who, while harboring a long love for Miss Julie, is to be married to Christine (Jenifer Coté), the manor cook. Miss Julie is used to getting what she wants, and that includes John. John wants something, too, and that is to "improve" his lot in life, and Miss Julie can facilitate that. Christine wants a simple life with a husband and a pension and a family.

Co-directors/scenic designers Elizabeth Craven and David Lear elicit strong performances from the cast. Niernberger's Julie is lost in a changing society, turning on a dime from entitled superior to groveling submissive. Coughlin's John is the villain of the piece, desperate to be something other than he is at any cost, but destined to be no more than a (literally) bootlicking lackey. Coté's Christine is the most aggrieved of the party, but even she is willing to forgive John's boorishness to ensure she gets what she wants.

After Miss Julie is a classic love triangle told exceedingly well, though the question of how much "love" exists between any of them is up for debate.